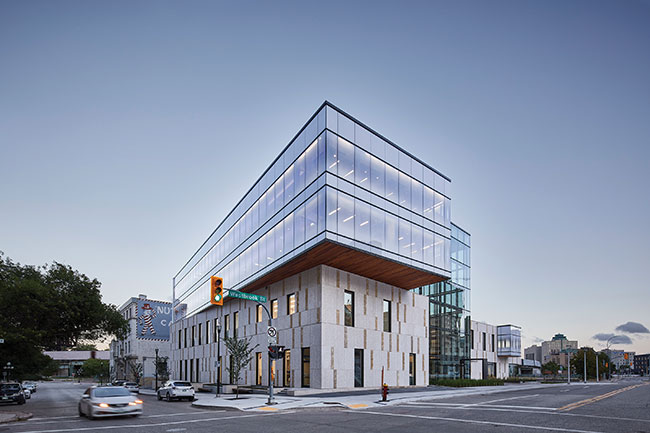 Designers were looking for a departure from the traditional look of a research building. photo: Stationpoint Photographic

AT A GLANCE – Richardson Innovation Centre

Setting the tone for future downtown development – that was one of the main design aims for the Richardson Innovation Centre in Winnipeg in terms of its overall look and its use of glass.

This exciting facility is located just south of the city’s historic Exchange District, which a century ago was the fast-beating heart of Winnipeg’s growing finance, manufacturing and transportation sectors.

Design-builder Bockstael Construction notes that the building “has transformed the streetscape of what was once a surface parking lot, just a block away from Waterfront Drive. It is a welcome addition to the corner of Westbrook and Lombard and showcases remarkable architectural details at every angle that are highlighted both day and night. The key architectural features include varying limestone textures and glass curtainwall on the exterior, prominent structural overhangs and a centralized glass atrium with a feature staircase.”

Brent Bellamy, creative director at Winnipeg-based Number Ten Architectural Group, notes that the building was designed to distinctly depart from the typical, historic (and generally not very attractive) design of R&D buildings. That is, unlike the other major research centre that’s so far been built downtown – the National Research Council of Canada lab constructed about three decades ago – the centre is designed through glass elements to connect activity inside the building with the street rather than keeping it closed off.

“One of our goals was to engage the building with the sidewalk,” he says. “We wanted to have internal building function expressed to the outside and connect the research going on inside with those who are passing by and that meant having large windows on the ground floor right next to the street.” 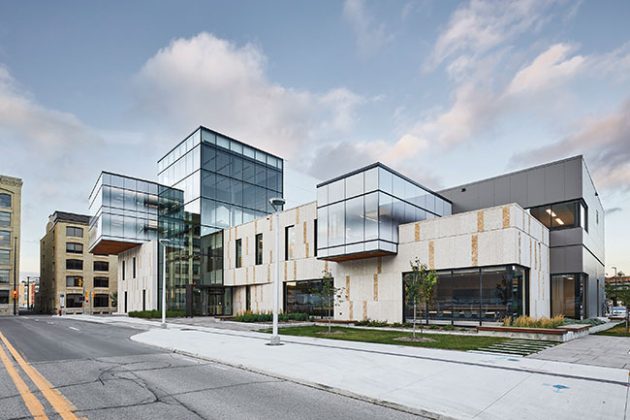 The big spans of glass connect occupants to the street and glow like lanterns at night.

Regarding the curtainwall, Glass 8 COO, Phil Gussakovsky, explains that while its installation was straightforward, the curtainwall “has attractive ceramic frit on the north side and we had to be very precise to follow the pattern.” Bellamy adds that “the frit helped us reduce glare, lower heat gain and resulted in less window covering requirements. It creates a diffused light and also balances the building in terms of its overall look. That is, the frit adds a modern lightness but the building still fits into the historic neighbourhood.”

In the entrance, Gussakovsky notes that the atrium is designed to look like a glass cube, open on three sides. Bellamy describes it as “a lantern” in the downtown when it glows at night. “We wanted the atrium glass to be as transparent as possible,” Bellamy says, “but also provide the required thermal performance. Garabaldi Glass was able to provide that.”

The building entrance also features a unique suspended four-story staircase with glass railings. “It was extremely challenging because of the very heavy pieces of glass required, 600 to 700 pounds each,” Gussakovsky explains. “We had to have a 50-foot spider crane inside the building.” The centre was also a unique project for Glass 8 because there was not very much space around the building to work with. “We had to be open-minded and find creative ways to get things done,” says Gussakovsky.

In addition to setting a design tone for Winnipeg’s downtown (and serving as a cutting-edge testing and R&D facility for Richardson International), the Innovation Centre is also serving to attract young, highly-skilled employees who favour a downtown vibe for both living and working. Bellamy has noted that if the Innovation Centre had been placed in an industrial park, it would not have been nearly as well-received as it is by this demographic.

“It’s adjacent to the famous intersection of Portage and Main and we hope the building will set a tone for what the future of the neighbourhood will look like,” says Bellamy, “so that it connects people the way the Exchange District did but also has that engaging modern look. The use of glass was a big part of that.” •