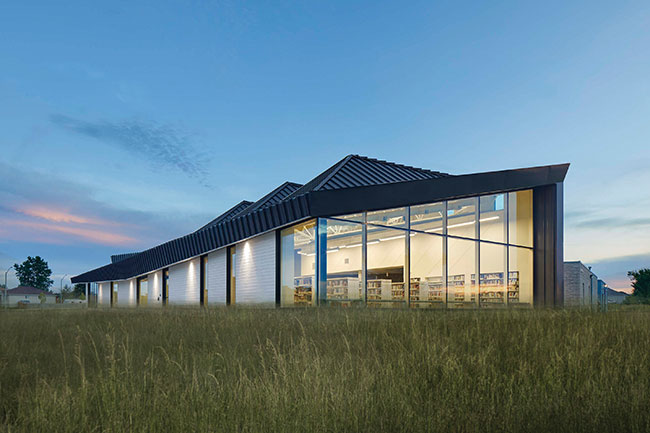 In a small town like Stayner, Ont., the library is more than just a place to read books – it’s a community hub and the design had to meet that role. photo: Tom Arban

AT A GLANCE – Clearview Public Library

“The hockey rink is the centre of town in a way, the whole city goes to the team’s games. It’s a big part of the community so it gets much more attention. It’s interesting to combine all these things at once. The library is something that’s going to get used more. During games, people go to the library between periods,” says Luc Bouliane, principal at Lebel and Bouliane, lead architectural firm for the project. “It’s a branch that does a ton, too – evening meeting rooms, an entrance atrium, Stayer Sports Hall of Fame, and artists hang art in the atrium space. It’s a well-used library.”

Overall, the project involved a 7,000-square-foot new build for the library and renovation to the community centre. The new library was designed alongside the arena with fields on both sides to ensure optimal natural lighting.

“We designed this branch mainly around solar orientation and what we wanted to do was take the best type of light from each time of day and put the kinds of programs in the library to follow suit with that,” Bouliane explains.

A combination of Sunguard SN 68 and SN 54 glass windows were installed throughout the building for this project, chosen for their UV values and clarity. On the north side of the building, where the books and reading area are located, large glass windows were installed to allow for lots of natural ambient light to work in. On the south side of the building is where first light takes place, so the entrance was designed to face south with a huge light scoop on the roof. 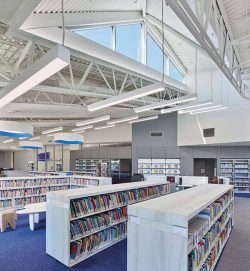 Letting in sun without overheating the interior was the challenge. The designers met it with low-E glass and careful orientation of the fenestration. photo: Tom Arban

“There’s a lot of reflective direct light into the middle of the branch,” Bouliane says.

The east side of the branch houses a variety of programs including the children’s area and a place for seniors to sit and have coffee and sit by a fireplace. The placement of the glass allows for the morning light to flood into the sides of those areas. On the west side, where the teen area and community meeting rooms are housed, Bouliane says the glass was placed in a manner that allows this section of the library to receive an interesting band of light coming across.

Being attached to the local arena presented some challenges for the design and build of the new library, as well as the installation of the glass.

“Since it was attached to the hockey arena, it presented sort of a form challenge. How do you just connect something to the side of an arena? We took the typology of the barn shape and kind of twisted it and folded it in a bunch of ways which allowed for all these types of openings and get in some light,” Bouliane says.

The biggest challenges related to the glazing were on the north wall, which required a lot of glazing and the roof skylights due to their geometry and shape.

“What’s interesting about the glass in this project is that it’s a project that’s designed around the sun. It’s not a glass box that wastes a ton of energy. Part of that is the kind of glass used but it is also the overall design, where the windows are oriented in the correct way, so you get the light without the loss of energy. That is more important than just the type and brand of glass and frames. Together with the design and orientation of all these locations, it just made for a very bright and open library but with a lot of solids, which is good for environmental reasons.”

Due to the library’s impressive design, the project was awarded a 2022 Design Excellence Award by the Ontario Association of Architects and was also the recipient of the 2022 Ontario Library Association Award. •