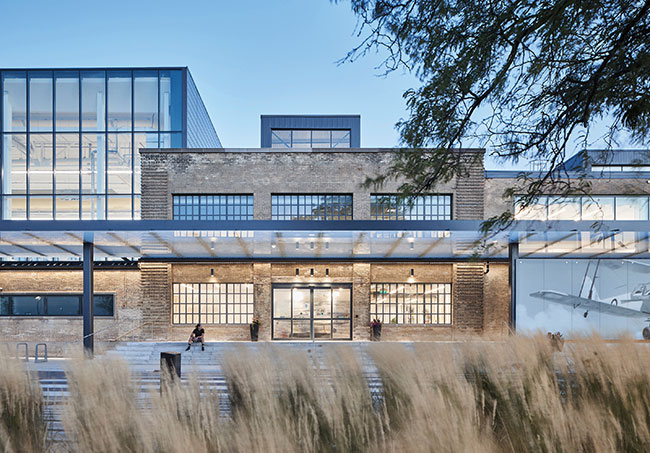 MJMA Architecture and Design was tasked with the challenging role of re-designing a near-century-old facility to house the Aviation and Engineering Technology and Applied Science program for Centennial College’s Downsview Campus Centre in association with Stantec Architecture.

Chris Burbidge, principal for MJMA Architecture and Design, says working on a heritage building was extremely challenging. Construction on the original building took place between 1928 to 1945, but the structure changed drastically over five eras when it expanded to produce components for the Second World War and later housed the aviation design and manufacturing sector and now the space functions as a post-secondary educational institute.

“This meant there was a huge amount of complexity in installing new glazing into an old masonry building. Components were failing and had to be reinforced. New rough openings had to be framed within this old facility. We had to cut into existing slabs to recess supporting channels for glazing partitions. We had to consider movement joints between the glass and large parts of the building, so they were very complex for movement. Then there’s thermal expansion and strength of glass in an industrial setting where you’ve got huge pieces of equipment, so we had to use a robust glass design,” says Burbidge.

Centennial College’s programs are taught inside the heritage portion of the building as well as in new extensions. The former industrial complex features two hangars, classrooms, administration offices, a library and learning and fabrication spaces that include avionics, electronics, engines and composite labs and group study and collaborative zones. It also hosts a museum of artifacts with a collection drawn from the site and exhibits conveying the history of Canadian aviation, according to the project description offered by the Ontario Association of Architects. The association recently awarded the Centennial College Downsview Campus Centre project with a 2022 Design Excellence Award.

The hangar, which is largely curtainwall glazing (atypical for hangars) was designed as a foil to the heaviness of the traditional and historic brick buildings that form the heritage portion of the building, Burbidge says.

“We really wanted to set off that heavy masonry block building with a light, transparent glass building, and those two function as foils to each other,” he adds.

The design was also created to put the aviation school facility on display as a visual learning tool, showing off the activities and processes of teaching inside this building to the outer world, both through physical transparency to the exterior and within the interior.

“The building, being a public building, lets the public walk through it and see all the teaching labs on display through large amounts of safety glass fused from the corridors into those rooms,” Burbidge says. “The interior glazing doesn’t hide the industrial nature of the space. It really lets it show through. You can go into this building and see from one end into the other and you’re looking through new meeting rooms and board rooms. Even the tool lending spaces have been given a certain amount of glass in them so you can see the hustle and bustle of everyday school life unfolding.” •