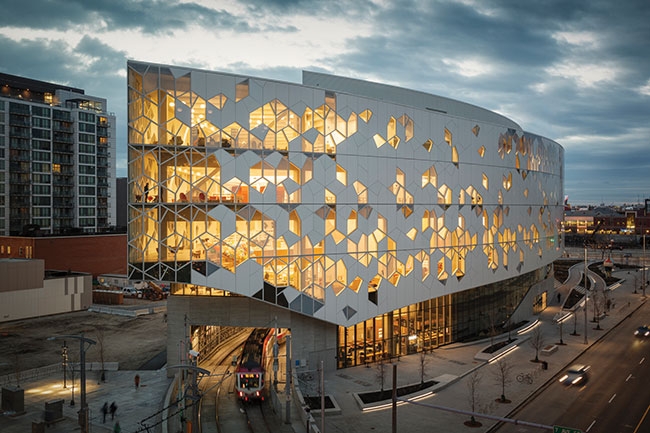 Ceramic frit was used on two surfaces to create the desired esthetics on the exterior while diffusing light on the interior.

Snohetta had one goal in mind for the new Calgary Central Library: create a strong visual identity for the Central Library that reflected its civic importance, one that referenced the ideas of community, togetherness and unity.

The Snohetta-Dialog collaboration reached completion in July 2018, and was embraced by the Calgary Public Library in September. The Calgary Central Library opened to the public on November 1, 2018.

As described by Snohetta, the aggregated variations on the hexagon form scatter across the building’s curved surface in alternating panels of fritted glass and occasional iridescent aluminum, portraying snowflake-like line work or interlocking houses. The pattern is contingent on all sides of the library. From an outside view, the Calgary Central Library has no distinguishable front because the exterior pattern stays consistent all the way around.

Dennis Rijkhoff, project architect at Snohetta, states the ideas of community, togetherness, and unity “led the team to create a bold pattern, composed of similar yet variable parts that work together to form a contiguous whole.”

In reference to the pattern and overlay of the glass, Rijkhoff said the hexagonal pattern “was designed to provide light and views, using a materiality that moves between transparent, fritted glass and opaque, iridescent metal panels.”

Due to Calgary’s cold but sunny climate, the facade was optimized to mitigate thermal, solar heat gain and glare conditions. Daylight exposure and views in each space were carefully studied for their effect on each interior space, as well as on the overall facade composition.

Many of the spaces along the facade are open and expansive. According to Rijkoff,“The design process focused on providing a variety of conditions for people to enjoy in each space – the goal being that users can choose whether to sit in the sun or in the shade.”

Some areas of glass were also treated with a double-layered ceramic frit, white on the outward face to create a visual blend between glass and metal panel and dark grey on the inward face to reduce light diffusion and to preserve views to the exterior.

The facade is composed of 40 per cent glazing and 60 per cent insulated metal panels.  The glazing is triple-pane low-iron, with argon-filled air gaps and two low-E coatings (#2 and #5 surfaces).

Snohetta is currently working on a number of projects internationally, including the Le Monde Headquarters in Paris and Temple University’s upcoming library. The Calgary Central Library is the third library Snohetta has completed, in company with the Ryerson University Student Learning Centre in Toronto and the James B. Hunt Library at North Carolina State University. Stuart Olson is an Integrated construction and industrial solutions company.

AT A GLANCE – Calgary Central Library