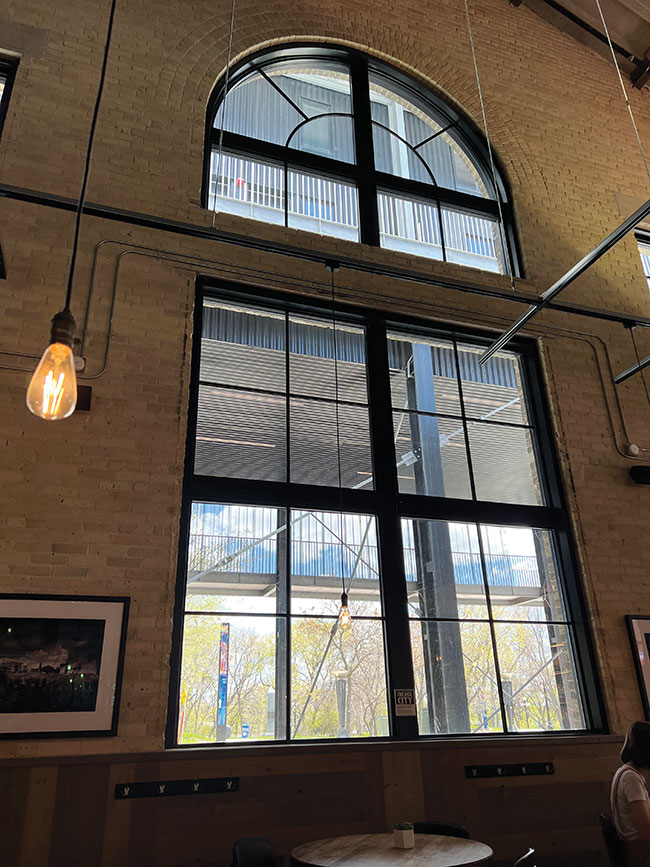 AT A GLANCE – the Pump House

In 1904, downtown Winnipeg was threatened when a fire raged out of control. The domestic water supply, fed by wells, was inadequate. The fire was extinguished and in 1906, the James Avenue High Pressure Pumping Station was built to deliver 1,800 gallons of water a minute as high as 50 floors through an eight-mile network of high-pressure lines to more than seventy downtown Winnipeg hydrants. That historic building forms the heart of a new mixed-use development called, appropriately enough, the Pump House.

After several failed proposals, the corner of James Avenue and Waterfront Drive has recently been redeveloped with an emphasis on heritage and views. Part mixed-use, part museum, the three-phase development includes the existing heritage Pump House building which is now flanked on either side by two new buildings. “Pump House East was the second phase of the project and is 28 apartments over retail,” says Bryce Alston, director of Alston Properties. “The component that’s currently under construction is called Pump House West and it’s 65 units over retail.”

“We’ve got a really good working relationship with Duxton Windows,” says Alston. “They continually deliver a very high level of service for us and produce very good product. AI Ducek, owner and founder of Duxton Windows and Doors and his team are very adaptable. They work with the types of buildings that we do: intricate projects that demand more from suppliers. They are problem solvers. The Pump House development is exactly the kind of project that is demanding in a sense in that you need to think outside the box and come up with creative solutions.”

“We’ve created specific products for applications at the Pump House that have a range of different capabilities, not just the classic dual and triple high-performance low-E,” says Ducek. “We can provide higher and lower shading co-efficients, so if you are facing east or west and are worried about heating and cooling loads, we can offer whatever combination makeup the modelling suggests is best. All manufactured in a state-of-the-art, world-class facility with a 20-year limited warranty.”

According to Alston, the site was tricky. “There was no staging area. Everything had to be just in time and that’s obviously more difficult these days. There’s been challenges associated with doing this project that aren’t common in all projects. It’s the nature of dealing with a heritage building and having a very high-profile site area developed in a downtown area with adjacency to other heritage buildings. It creates a number of challenges.” 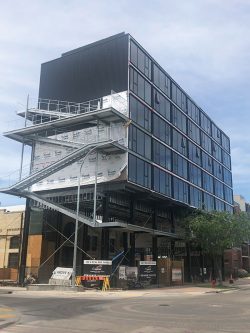 The Pumphouse project comprises a renovation of the original building with attached retail and residential units added.

“There are just more approval processes,” says Alston. “Duxton Windows is very used to dealing with the heritage department; what they’re looking for, what they want to see. They know how to navigate that process, which saves me a lot of time, effort and energy. That’s another big component of redeveloping these heritage buildings. Oftentimes dealing with the city and city processes becomes one of the biggest inhibitors for us.”

Views are also extremely important. “In the second phase of Pump House, there’s a full glass wall that overlooks Stephen Juba Park and the Red River,” says Alston. “It’s a massive attraction for tenants there. Our lease-up went extremely well. The building’s been full since we completed it over a year and a half ago. We never have a vacancy in that building because it’s such a unique product and the views are so phenomenal.”

“We were looking for as much windows as we could because the views are spectacular,” says Ken Borton, of 5468796 Architecture. “And then the amount of light we always want is an important aspect. Even the small windows facing west away from the river are crucial when it comes to the ability to open those windows and have cross ventilation and then even actually a connection back to the heritage building.”

“Those small windows actually play a big part,” says Borton. “Obviously the key ones on the front were the most important part in terms of trying to get floor-to-ceiling glazing and do that in a way that was cost effective and repeatable.”

“We worked out ways to get prefab structures installed in large sections all at once,” says Borton. “These large window walls were essentially framed up almost like a component of the structure of the building then installed all in one piece. Pre-glazing was an important process that allowed for a quick and straightforward installation of these modules. Less trips up and down the building.”

Collaboration was a major factor says Ted Geddert of Holz Custom Prefab. “It brought our disciplines together,” says Geddert. “You have a progressive and trusting owner who is willing to take a calculated risk including going with a piece of property that others have failed to develop.  And then to find an architect partner that makes the vision creating a beautiful building that interacts with the street and existing heritage site is remarkable.” •