A facade that shifts with the day. 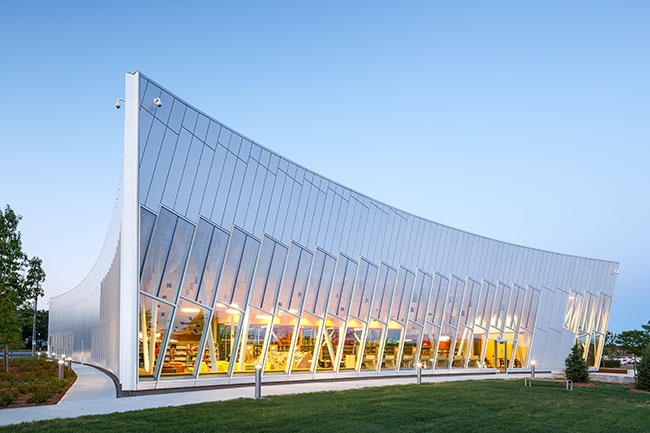 Complex tilted panels create an illusion of movement as the sun hits the Vaughan Civic Centre library from different angles through the day. The design was inspired by the curves of a nearby roller coaster at Canada’s Wonderland. photo credit: Doublespace Photography

The Vaughan Civic Centre Resource Library is a shining example of one of the most challenging glazing jobs in the Greater Toronto Area to date,” says Ted Redlarski, president of Noram Building Systems, glass fabricators and installers of the new $15 million library sited on Toronto’s northern outskirts. “Certain elevations of the building proved the most tricky,” he continues. “Glass is used to build a wall of sweeping curves tilting sideways 15 degrees and leaning forwards from zero to 15 degrees, substantially twisting the infill glass and aluminum panels, creating an extraordinary illusion appearing to defy the laws of physics.”

Speaking from his company’s 150,000 square-foot facility located in Mississauga, Ont., Redlarski is referring to the City of Vaughan’s gleaming 35,500 square foot stand-alone building that’s the latest addition to the sprawling administrative campus, the Vaughan Civic Centre. With its ethereal façade and shifting translucent form, the library is called a beacon of the community, one that makes a cool and clear statement that this is a meeting place tailored for the future of the city. Opened to the public in May 2016, the library encompasses a media lab (with a recording studio), collaboration spaces, meeting rooms, a teen-only lounge, public-access computers, a study hall, and a multi-storey marketplace that includes retailers and a café.

“This is a very important facility for the City of Vaughan,” says Paul Stevens, principal at Toronto-based ZAS Architects, who spearheaded the library’s unconventional, whimsical design that over the course of the day appears to dissolve from transparent to solid, its geometric form constantly shifting and changing with the daylight. “The exterior’s signature feature is achieved through a collection of concave semi-mirrored surfaces,” he explains. Reflecting its surroundings and patrons, the façade reveals a layered set of interior spaces with a tiered courtyard at its centre. The inspiration for the playful form and roofline are inspired by the curved elements of a roller coaster track at nearby Canada’s Wonderland theme park, Stevens explains with a smile.

In order to craft such a sophisticated shape, the design had to be first produced in a complex 3D model. Notes Redlarski, “From this model, we extracted and refined the exact sizes and angles to achieve each infill panel and frame components’ unique and perfect fit.” Throughout the installation process, further intricate steps were taken to ensure its success. The installation of the anchor points required complex laser triangulation in order to place the anchors in their precise positions. Due to the twisted shape of the frame, multiple pieces of glass and panels were subject to substantial cold bending during installation. With the masterful relationships between glass and aluminum, and the visual relationship of pushing the boundaries of physics in architecture, the gradient frit pattern creates a seamless transition from vision glass to solid panel that Redlarski believes adds more depth and artistry to the look of the library. “Our entire team is proud to be part of this great accomplishment,” he affirms.

Noram won the Ontario Glass and Metal Association’s 2017 Award of Excellence for Execution for this project. Redlarski accepted the award at Top Glass in April. In presenting the award, the OGMA judges said: “The curvilinear form of the building’s plan coupled with the vertical cant in two axis of the curtainwall system requires significant design detailing and coordination, and generates construction challenges which are all successfully met. This building is a dynamic and excellent example of the application of standard curtainwall technology to create a very visually distinct façade.”

About the contractor
Noram Building Systems is part of the Noram Group based in Mississauga, Ont., that has been in business for about 20 years. Design-assist is a major part of Noram’s value proposition, allowing the company to integrate a viable plan for the building facade right from the earliest stages of project planning. Noram also provides fully in-house fabrication and installation, retaining quality and logistics control over every aspect of the facade project out of its 150,000-square-foot production facility. Noram proudly advertises its affiliation with the Canada Green Building Council.