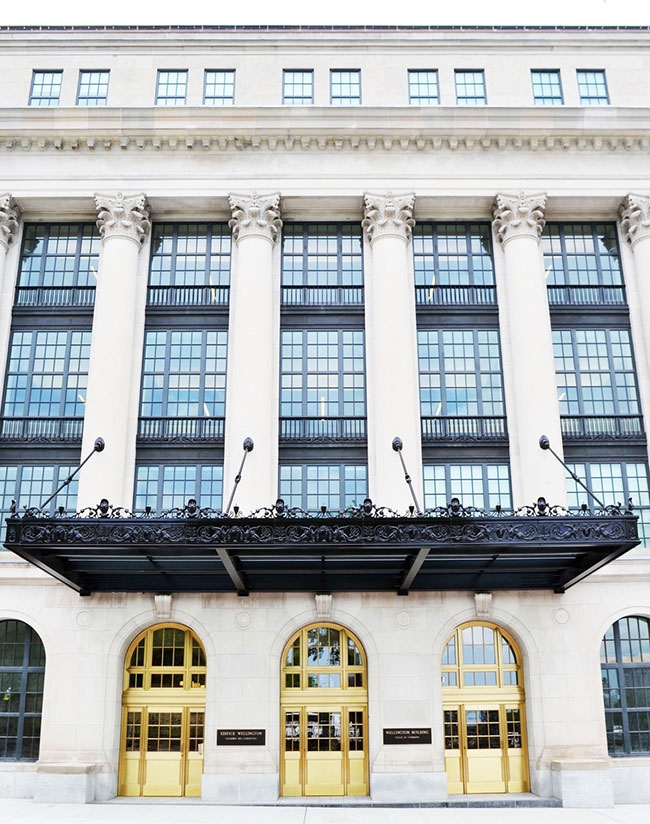 Melding stunning historic elements with safety and high environmental standards are the hallmarks of the recent renovation of the Wellington Building in Ottawa. Located across from Parliament Hill, it was constructed in 1927 for the Metropolitan Insurance Company, underwent a substantial enlargement in 1959 and was acquired by the Crown in 1973. A major renovation, started in 2008 under primary architect NORR Limited, has prepared the Wellington to house the offices for 70 members of Parliament and much more.

As the project’s heritage conservation architect, EVOQ Architecture was responsible for tasks such as the copper roof replacement and restoration of the existing masonry envelope. Inside, the mosaic-vaulted vestibule, marble-clad lobbies and historic stairs were brought back to their former glory to the fullest extent possible.

Restoring the distinctive historical glazing features, notes EVOQ architect Eric Stein, involved integrating heritage conservation with both building security and energy performance. “All the building’s 428 exterior windows were replaced with thermally-broken aluminum units, custom-designed to replicate as closely as possible the exterior appearance of the original steel units,” he explains. “As these profiles are much narrower than typical aluminum extrusions. We consulted with several window fabricators to ensure that replication of the original muntins and frames was possible without sacrificing performance and structural stiffness.” In the end, all windows (except the exterior punched ones) along with many other glass features were installed by National Contract Glaziers with contractor Amor Construction. A low-reflectivity film was used to better simulate the original transparent look and the frame bite on the sealed units was tailored to respond to the high winds possible near Parliament Hill.

The distinctive glass canopy is a close replica of the original cast iron feature that originally adorned the main Wellington Street entrance. Stein says laminated and tempered glass was selected to address the large spans and ensure proper resistance to snow loads.

Inside the building, new bronze doors, transoms and screens were re-created to match the surviving units, with the inconspicuous integration of modern electrified hardware. “As bronze reinforced framing units are not commercially available,” says Stein, “a close collaboration with fabricators Insulgard and Soheil Mosun allowed the integration of a custom-fabricated bronze ‘skin’ that emulated the appearance of the original screens.”

The spacious multi-level atrium houses the entrance lobby, a resource library and committee rooms, with a large 5,000-square-foot skylight filling the space with natural light. According to construction firm EllisDon, the skylight is set into extruded aluminum purlins and rafters, supported by a structural steel grid. The 152 triple-laminated units are made up of 17 different sizes and shapes, each with an average weight of 450 pounds.

“All the skylight glazing was installed with structural silicone, capless other than for the ridge members which also provided a home for the lightning protection rods,” explains NORR architect Paul Dolan. “Clear vision sealed units were installed in the interior with a scrim-coated perimeter. The flush eaves incorporated concealed heat trace guttering.” Below the skylight is a secondary framework grid incorporating a light-diffusing stretched film and lighting. This frame also supports rails for a travelling gantry for maintenance and re-lamping.

NGC’s Ron Coppens lists a primary challenge of the glazing installation to be the large pieces of glass at entrances – some almost 18 feet long but only four inches in width. “In many cases,” he says, “custom hoisting equipment and apparatuses were required on site.”

About the contractor
National Contract Glazing is an Ottawa-based arcbitectural glazing contractor led by John Bastedo and Jean-Guy Tremblay. Established in 2000, the company employs about 50 and operates out of an 8,000-square-foot plant. The main focus is design, fabrication and installation of aluminum curtain wall, storefront, windows, skylights and glazing. Primary market area is eastern Ontario. Notable other projects include MacOdrum Library at Carleton University (high-performance, structurally glazed curtainwall, windows, doors, all-glass doors and skylights); St. Francis Xavier high school in Ottawa (curtainwall, skylights, windows and doors); the Genivar Building (segmented curtainwall, windows, doors and all-glass doors); and the Irving Greenberg Cancer Centre (high-performance, triple-glazed curtainwall, door, all-glass doors and screens). The company is comfortable with both small and large, complex projects, priding itself on a process allowing it to effectively track completion and deliver results on time. Multi-phase public projects like the Parliament Hill renovations are not a problem for National Contract Glazing.

National Contract Glazing was the subject of Glass Canada’s Under the Glass feature in June 2016, which chronicled the development of the company from a tiny startup in an industrial unit so small Bastedo and Tremblay couldn’t turn around a 24-foot extrusion. The story covers the roles of other key players in the company, including office manager Kathy Knox, chief estimator Michel St. Denis and business manager Keith Cowan. Coppens, who was interviewed for this article, is a senior project manager who took the lead on Wellington Hall. He works with Jason Georganas and Alex Wertwyn to provide expert project management services to NCG clients.

AT A GLANCE – Wellington Building
Architects: