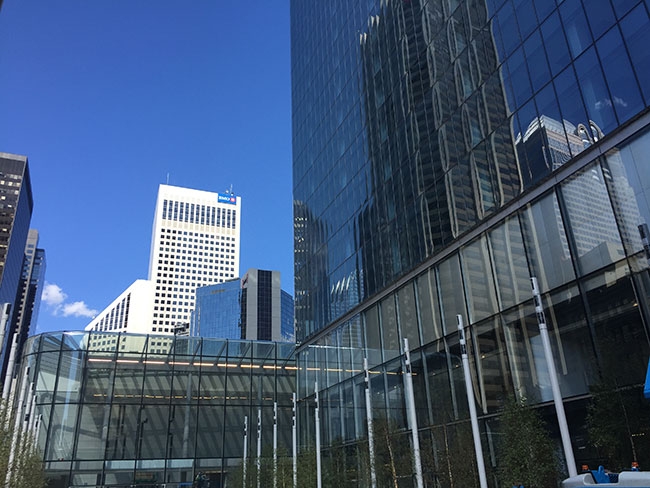 A full-block development consisting of office towers, retail space and an outdoor plaza, Calgary’s Brookfield Place steps up as one of western Canada’s tallest buildings.

AT A GLANCE – Brookfield Place

A collaboration between SKA Architecture and Dialog, the base of Brookfield Place is a three-storey podium, standalone pavilion and two floor-to-ceiling glazed skywalk bridges, part of Calgary’s Plus 15 network.

Calgary’s Evolution Glass partnered with German-based Seele who designed and engineered the system in their head office near Munich. The steel was fabricated in the Czech Republic while the glass was predominately fabricated in China with the complicated corner units manufactured in Portugal. Everything was shipped to Calgary where Evolution assembled and ultimately installed the complete system.

“I’ve been told that it’s never been done before anywhere in the world,” says Munro. “The pavilion is an all-glass structure. Not only are the walls glass but so is the roof. The giant skylight on the roof and the vertical walls curve at the top slope into the roof and connect into the skylight via a giant gutter system.”

There is the oversize factor, but to make things really interesting, all of the corner windows are bent. The building also gets progressively larger as you get higher so the bottom of the lobby is smaller than it is at the top. On the top corners of the pavilion, which are also curved, there is actually a double bend happening. “The top piece is shaped like a J but also rounds out around the corner. It was definitely something different.”

When Evolution Glass was awarded the podium and pavilion project, they set out to purchase a custom vacuum glass lifter. “We obviously wanted something that could handle the weight,” says Munro. “But we also needed versatility and to be able to accommodate the various shapes of the job. We designed a set of custom cups that would take the weight and then we engineered custom attachments that could be added on to accommodate the shapes.”

Evolution introduced a bar feature with tilting cups that allowed them to attach to either side of the J-shaped panels. “We also built an L-shaped version with custom cups so we could attach to the L-shaped glass in the right fulcrum points,” shares Munro. “They had to go in perfectly level and flat. It was a bit of an undertaking to get that to lift properly. We had an idea how to do that but needed to actually set it up and test our idea offsite with some trial and error in practicum so when we got on site everything went in nice and smooth.”

Evolution had different mobile cranes on site for the duration of the project, however the average weight of each skylight unit was 600 pounds and the company needed a larger crane with a different set of glazing cups to reach over the pavilion walls from the streets. “There were a lot of logistical challenges that had to be overcome. Lots of stakeholders. We were working for Seele and Seele was working for ElisDon and ElisDon was working for Brookfield. Plus coordinating with the other trades on the site.”

It is the biggest job that Evolution Glass has ever undertaken. As an installation-only contractor for this project, Munro says it was a large contract for labour-only, equipment and access.

“To install the pavilion structure, you have a three-storey, freestanding building with a floating skywalk that wraps around the perimeter of the building,” says Munro. “For access, we had to build a custom three-storey scaffolding on the inside to do all of our anchoring connections on the steel as well as to do all of the interior finishing details. Up on the inside of the pavilion, especially around the gutters, there were all sorts of custom cladding so we had this huge scaffolding set up for several months.

According to Munro, the scaffolding actually acted as a temporary support for the pavilion steel. “There was a lot of engineering involved in making sure the scaffolding was capable of supporting the structure.”

On the backs of the curtainwall steel sections, there are chases to accommodate electrical conduit and fire sprinklers. “It is a unique aspect of this curtainwall to have the chases built right into the framing system,” says Munro. “In a normal curtainwall, you’d probably have some kind of steel skeleton structure and in this case we didn’t have that so the curtainwall was the skeleton structure.” Munro describes the system as basically large pieces of steel designed to support itself as well as the giant glass panels while hiding all the electrical and sprinklers. “We had custom covers that went over top all of that after the fact so there was a lot of coordination with different trades.”

Evolution also custom-built over 70 10-foot by 20-foot shadow boxes that, according to Munro, were basically oversized, insulated backpans with textured stainless steel face panels. Each shadow box has a lite of glass with ceramic frit installed on the front of it.

To protect the pocket in front of the shadow box and the glass from condensation, everything is tied into a manufactured air system. “We plumbed in warmed, compressed air that is continuously pumped into every single shadowbox cavity,” says Munro. “Each one is individually connected with a compressed airline running back to a machine that constantly monitors key metrics including the humidity, air pressure and temperatures of every single piece. On top of being glaziers, we basically figured out how to be plumbers, HVAC, electricians and glaziers. It was pretty wild.”