A remarkable skylight to protect the temporary home of the House of Commons. 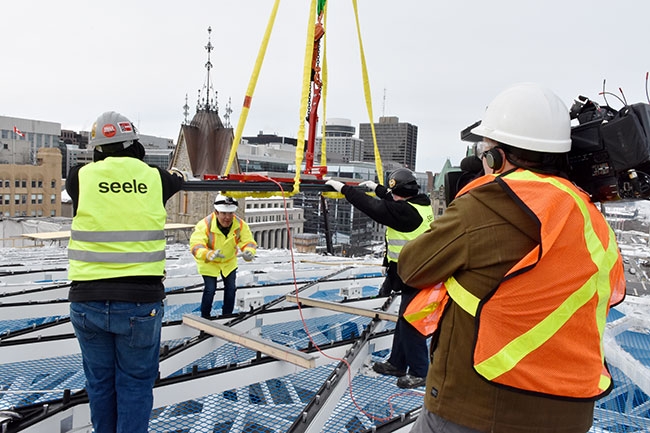 Since it’s the Parliament Buildings, the West Block renovation has attracted attention from all across the country. CBC’s Rick Mercer visited the site and shot a segment for his show where he “helped” Seele install one of the skylight panels. photo credit: Michal Grajewski, Rick Mercer Report

As part of the current Parliament Buildings rehabilitation being performed by PCL Constructors Canada, work on the pre-Confederation West Block began in 2011. By the fall of 2018, its permanent courtyard infill will serve as a temporary House of Commons Chamber during the upcoming rehab of the Centre Block over the following 10 years.

It’s estimated that the infill will increase useable space of the historic building by about 50 per cent. Following the return of the House of Commons to the finished Centre Block, the West Block will house Parliamentary office suites and the infill will be converted into committee rooms.

The star of the interim House of Commons Chamber is the triple-glazed infill roof, with its stunning diamond and triangle-shaped panes. Georges Drolet at Fournier Gersovitz Moss Drolet Architects (in joint venture with Arcop on this project) is the partner in charge of courtyard design. He says it was very important that the infill, once covered, kept its original exterior character. “A glass roof was the best way to allow a maximum of natural light into the space,” he notes, “and keep the exterior facades visible.”

Drolet reports that over the past two decades there have been a number of significant projects around the world incorporating glass-covered courtyards within historic buildings, such as the National Portrait Gallery in Washington and the British Museum in London. “These, however, are neo-classical buildings with a regular edge condition,” he notes. “The West Block is the first in a picturesque Gothic Revival building with an irregular perimeter of chimneys, turrets, towers and varied rooflines. It’s a very complex challenge.”

The existing building could not carry the weight of the new roof, so an independent grid structure was built of all-Canadian steel (a total of seven kilometres all lined up) held together with over 30,000 bolts. “In addition, in order to provide the most appropriate environment for the Chamber space, a variety of conditions needed to be met,” Drolet explains, “such as acoustic characteristics responsive to debating and exterior noise mitigation, especially at times when TV broadcasting will be in progress. Light control is important for TV camera operation, with blocking all direct sunlight being the main goal.” The team accomplished discrete integration of all elements through a layered roof assembly, which contains a triple-glazed outer envelope, mechanized sun louvers, a light transmission maintenance platform, and the lower laylight, which acts as a ceiling to the interim Chamber and incorporates acoustic absorption panels, ventilation and fire suppression.

Project manager Sebastian Keller of Seele Canada/Germany says the installation of the glass roof was challenging for several reasons. “There were deflections and movements between new structure and the existing building, two completely independent systems,” he says. “We used an innovative new European netting system to provide easier access for installation, without the need to wear harness and lanyard.”

Installation of the stunning glass roof was also challenging because it mostly took place during the winter of 2016-2017. This meant conducting pre-assembly in heated enclosures, lifting of preassembled framing to the roof top, sealing gasket joints in heated enclosures on the roof, and glazing in both snow and wind – a collective feat that speaks to the nature of Canada and seems fitting for a Parliament Building retrofit.

About the contractor
Seele Canada is based in Toronto. It is the Canadian branch of an owner-managed multinational with operations in 12 locations, including Germany (the company’s origin location in 1984), Austria, Czech Republic, U.K, France, the U.S., China, Singapore and the United Arab Emirates. Seele employs over 1,000 worldwide. Canadian operations are led by Andres Hafner, president, Michael Steinhulb, vice-president, and Adam Barrie, sales manager. According to the company website, the organization’s strengths are providing the whole range of construction competencies for building facade, drawing on the depth of expertise available in the company’s huge global network. The main focus for Seele Canada is steel and glass facades and other noteworthy projects include the TEC Bridge in Toronto and Brookfield Place in Calgary. •