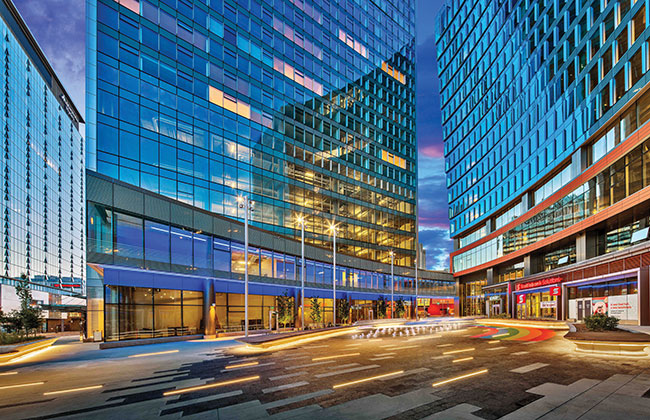 The five-sided building design created some challenges for the curtainwall fastening system.

AT A GLANCE – True North

Architect: Perkins and Will, Architecture49

The look of downtown Winnipeg has been changing significantly over the past few years. Unlike many other major cities across Canada, towering office buildings have not been a significant part of Winnipeg’s downtown core. That is starting to change. One reason is the ongoing construction of True North Square.

The first two towers have been constructed with the remaining tower projects and hotel construction currently underway.

Construction of the first tower, a 17-storey Class A office and retail building located at 242 Hargrave Avenue, was completed in June 2018. This milestone marked the first privately developed office building to be built in almost 30 years in Winnipeg.

The general contractor on the first two towers (and an additional tower currently under construction) was PCL Constructors. Chris Erbus, envelope superintendent on the project for PCL, said accuracy during the construction of the structures of the buildings was extremely important because of the curtainwall system that was used.

“The building was 3D-modelled and we utilized Total stations and engineers to do layout of the embedded anchor pockets provided by Gamma [PCL’s curtainwall subcontractor]. They provided the pockets and those were cast in place. They were laid out according to Gamma’s requirements for their curtainwall system. That was the main focus during the construction of the structure itself,” Erbus says. “There were some other aspects that had to be taken into account as well, like our man and material hoists required tie-backs for the building, and we had to make sure it wouldn’t interfere with the installation of the curtainwall. The crane tie-backs were strategically placed so we could optimize the installation around those required components. After that it was managing the installation of the different types of curtainwall that we had on the project.”

The first four floors of the 242 Hargrave Tower had a unique design that needed to be taken into consideration during its construction.

“The first four floors are a mix of stick frame curtainwall with one floor of a unitized system that goes between two structural floors,” Erbus explains. “Then above the fourth floor, that’s where it’s four-sided structural sealed unitized curtainwall.”

One interesting aspect of the design of the first tower is that it has five sides.

“It’s kind of like a pie shape with a north, east, south, west, but then a face that has a slight curve to it, which faces the northwest that oscillates. This is one of the defining features of this building. One side of the building – on the north side of that northwest face – it steps outward, so each level kind of comes out more. Then on the south end of that curved face, it steps in,” Erbus explains. “From level four to level 17, it steps out about 15 feet on one end and then on the other end it goes in about 15 feet. The floor plate changes and the curtainwall does an interesting twist. That was a real big challenge in terms of getting the structure right, but also, it wasn’t a flat wall of curtainwall. You have a unitized system that locks together. Each unit along that system has a different connection at the top and the bottom. So that was probably the most interesting and challenging part of the curtainwall system on that tower.”

The majority of the glass for both towers was unitized, four-sided structural sealant glazing system produced at Gamma’s plant in Quebec City.

Sheldon Howden, field manager for Border Glass, the installer that worked on the first and second floors and the podium of the Hargrave Tower glass installation, and all of the installation for the second tower, says that getting the heavy glass units to where they needed to glaze it was challenging at times during the first tower’s construction.

“The first and second floors were all triple-glazed big units – heavy glass. For the second floor, we actually had a spider crane set up with a manipulator to angle the glass out of the openings and then flop it back upright to actually glaze into the exterior of the curtainwall, just because we had no access to the outside,” he says. “You’ve got 700- and 800-pound units and you’ve got a few inches either way to get them through.”

For the podium, they used all Alumicor products.

On the second tower – a 25-storey residential rental building equipped with office and retail spaces – Border Glass installed all the glass for the bridge, podium and tower using a unitized curtainwall system between March 2018 and August 2019.

The first floor was all triple-glazed IGUs with duals installed for the rest of the way up the tower with the exception of the penthouse, where some triples were used.

The two towers are built in compliance with the National Energy Code using the performance method.