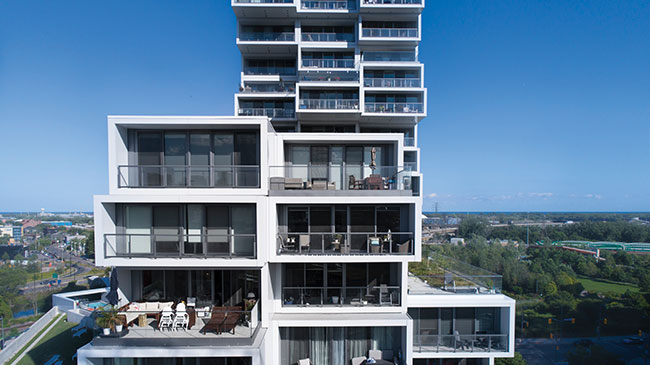 At the eastern edge of downtown Toronto, a residential community is being built since 2009 that is breaking new ground with every phase of the construction process. Nearing the completion of its fourth phase, the River City Development consists primarily of condominiums and townhouses. Of this, the design of River City 3 has managed to capture the attention of the construction community specifically after accolades for its design.

Saucier and Perotte Architects and Zas Architects came together to design the entire River City project, including River City 3. The idea was to create a livable, sustainable neighbourhood in the area, according to Paul Stevens, senior principal at Zas Architects. “Architecturally, we wanted to develop a community that looked quite different from other multi-residential projects in Toronto. We joked that there were too many buildings with green and blue glass everywhere. We wanted to create something visually appealing on the skyline.”

Stevens notes that, typically, glass is one of the weaker envelope components in terms of energy, heat gain and loss in a building. However, it was also very important to use glass as people want bright units with great views. Therefore, the team of architects wanted to use glass in a way that would contribute to the sustainability requirements of a LEED Gold project.

“We wanted to use glass in a way which was meaningful, that was sustainable. Glass is typically one of the more expensive components in a building, so we wanted to be able to work with a budget for glass that may include different types of glass or different patterns of glass that would improve architectural expression of the building,” explains Stevens.

The River City 3 building has about 40 to 45 percent glass, in terms of overall building envelope. The team specified low-E products. Double-glazed units were used as triple-glazed products were out of budget. For the purpose of energy efficiency, the team wanted to minimize heat loss through frames of the curtainwall and window wall systems. Therefore, the largest possible glass panels were created.

Stevens notes that to get as much visibility as possible, the architectural team pushed very hard to use as much curtainwall in the project as possible, especially in the retail spaces around the base of the building. Window wall systems were used in areas that have large balconies.

He adds that a range of glass products were used in neutral colours.

“We used black smoked glass that had a lot to do with how we would like to transition between metal panels to glass panels. We also used patterned glass. This was not only just overall patterned panels but also panels that fade as you move across horizontally. It goes whiter and whiter untill the glass is 50 percent translucent. In other places, the panels go from 50 percent translucent to 100 percent opaque.”

To meet the city’s design guidelines, bird-friendly glass was used throughout the base of the building. For the glass balcony panels in the building, tempered glass has been used. Stevens explains that if anything were to happen, the tempered glass would shatter into tiny pieces instead of large ones.

Quest Window Systems was tasked with adding the glazing and fenestration elements to the building to complete the vision. Martin Cash, CEO of Quest Windows, notes that a variety of materials were used in the project. “We used our own Ecowall window system, which was the primary framing system for the residential component. It was enhanced with our own proprietary awning windows with European multipoint hardware and our Italian lift-and-glide sliding patio doors.”

For the glazing, the architects specified a combination of Pilkington grey-tinted solar glass and Cardinal low-E 272 in the insulated glass unit. Additionally, Quest Windows manufactured its own proprietary curtainwall system, which was a four-sided silicone SSG system. It was glazed with a similar combination of glass, but the inboard light was laminated to meet the STC ratings that were required and specified on the project. Cash further adds that the ground floor areas were done with a proprietary stick-built curtainwall system. And that was done with four sided SSG glazing as well. “We used a Phantom-designed commercial door, which is, in effect, a front-glazed style of Phantom commercial door and entry system,” says Cash.

Cash explains that to install the glass and fenestration systems all tools known to the industry were used, including scaffolding, swing stages, spider cranes and tower cranes, to achieve the astounding end result.