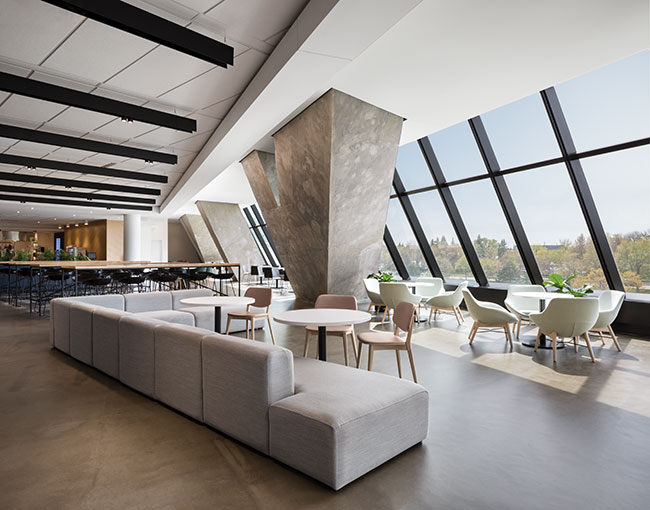 AT A GLANCE – Desjardins Tower, Montreal

Many Canadians outside Montreal aren’t aware that the Olympic Tower of Montreal has sat empty since 1987. Empty, that is, until the summer of 2018, when employees of Desjardins Movement moved into the newly created office space. The company now occupies most of the rental space available – seven of the 12 floors of this landmark building – with 1,000 people now coming to work there each day.

The historic project was initiated in 2015 with architectural firm Provencher Roy at the helm. The most striking part of the update was replacement of the prefabricated concrete envelope (which did have vertical strips of windows) with a full curtain wall.

“The original facade had a curve running horizontally south to north, due to the curved slab edges of the original structure,” explains Osama Ghani, project director at Vitreco, which was the glazing contractor for this major building update. “Once the original pre-cast units were demolished, the slabs needed to be extended outward to eliminate the original curve. This eliminated the requirement for curved glass prefabricated curtain walls, thus making the project much more economical to the client.”

The greatest challenge in the curtainwall installation was site access. “Due to the cross-braced concrete columns of the tower, access to install the curtainwall panels from the interior of the slab was not possible,” Ghani reports. “In addition, the variable slope in the face of glass due to the inclination of the tower posed a greater difficulty for installation as the panels needs to be lifted horizontally and then somehow manipulated mid-air to the proper inclination in order to fit into their final locations. To resolve both issues, we installed the panels using the tower crane, coupled with a custom-designed vacuum suction system for the lifting and installation.”

The windows of the re-made building are unobstructed, allowing occupants stunning views of the stadium and the city. Besides offices, many areas for collaborative work and also relaxation were also included in the design.

Ghani notes that the vision glass installation was difficult in that double-laminated 40.5-mm IGUs were used for both the inboard and outboard lites . This doubled the unit weight of the glass in comparison to standard 25-mm units. “In addition to the heavy glass, some prefab curtainwall units were up to 6,300 by 1500 millimeters in size,” he notes, “making the overall weight of the panels very heavy compared to other projects we’ve worked on.”

Ghani also explains that the glass features took the nature of the tower into account, namely, its limited access to the outside and the safety of building occupants. “For example, if breakage does happen on the outboard lite, due the rigidity of the SentryGuard it would stay intact, in place, and watertight for many months until replacements can be procurred,” he says. “Similarly, with the interior lite, due to the inclined nature of the facade and the fact that some glass units might be directly over people standing next to the curtain wall, any breakage would keep the inboard light intact and therefore the people under it safe.”

The glass was also specified to have an easy-clean coating on the exterior face: a chemical coating that would reduce cleaning costs. “Lastly, the glass spec called for 100 per cent heat soak testing,” Ghani explains. “This testing greatly reduced the risk of spontaneous breakage due to nickel sulfide impurities of the tempered glass during its service life, and therefore reduces the overall risk for the client.”