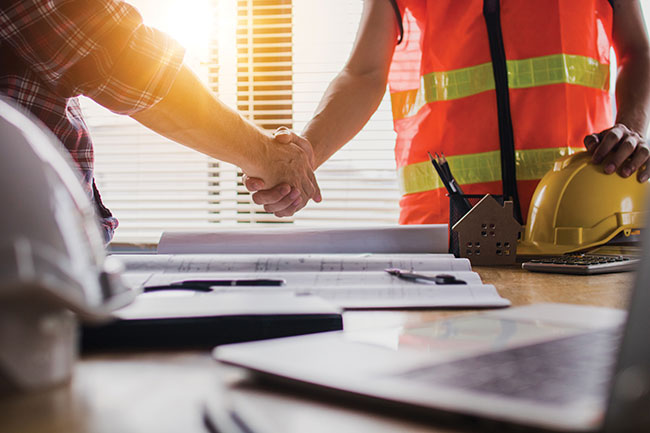 These people are acknowledging a contract agreement with an ancient ritual known as a “handshake.” © 10255185_880 / iStock / Getty Images Plus

At the core of every contract negotiation is one question: who bears the risk? The final agreement represents an allocation of risk between the parties involved.

So it’s good news for glaziers that updates were made in 2020 to the Canadian Construction Document Committee’s standard contract form. The CCDC contract is just a template, of course, that no one is required to use. But it’s been a widely accepted standard for major construction contracts in Canada for many years now. The first template was created about 25 years ago, and the second version, CCDC-2, was released in 2008. Chances are, your customers’ contracts with the project owner are based on it. The changes made last year were intended to allow more certainty for contractors on a number of fronts, but as is the case when any framework is updated, all parties need to pay close attention to new contracts going forward to ensure the terms are understood and met. Let’s dive into what glazing contractors need to know.

Ready-for-takeover
In the new template, “substantial performance” is separated from a new term, “ready-for-takeover.” This major change means there are now two main milestones in finishing construction projects instead of one. “Usually, all parties are paid 90 percent of their invoices during the project and the rest is holdback dispersed at the end of the job,” explains lawyer and construction law expert, Glenn Ackerley from WeirFoulds. “The conditions for achieving substantial performance and ready-for-takeover were intertwined and complicated, which led to delays in holdback payment for main contractors and subcontractors such as glaziers. This will make it faster.”

Statutory holdback remains tied to the substantial performance milestone as laid out in provincial lien legislation, which is the point in the contract where the building has achieved a prescribed financial completion level, even with some incomplete work or deficiencies remaining to be addressed. Once substantial performance has been reached, the statutory holdback lien notification period and payment terms take effect. “The other parallel track, if you will, to project completion is ‘ready-for-takeover,’ which means the building is officially the owner’s,” Ackerley explains. “Things like building warranties and insurance policies kick in. Ready-for-takeover will usually be at a later date than the point of substantial performance, a later date than perhaps you have been used to.”

According to mondaq.com, ready-for-takeover is achieved when conditions such as these are met: achieving substantial performance; issuing of an occupancy permit; final cleaning and waste removal; delivery of operations and maintenance documents to the owner; and completion and submission of as-built drawings

However, Michael Assal, president of Taplen Commercial Construction in Ottawa and a Canadian Construction Association representative on the CCDC board, notes that in a phased handover, parts of the building may be taken over by the client after achieving occupancy well ahead of substantial performance. The new template contemplates the possibility of an owner taking early occupancy of a building after substantial performance is achieved but before ready-for-takeover conditions are met, if the owner wants to accept responsibility for any remaining work and start the clock on warranties.

Minimizing supplementary contract conditions
Another major change to the CCDC-2 Contract was made to minimize the use of supplementary conditions, which in many contracts add dozens of extra pages. This is an area that often impacts subtrades, since the conditions are more specific and can address individual elements of the building. The effect sometimes was to “bury” conditions in the contract that could substantially affect acceptance of work after completion.

The new contract form is designed to work together with the CCDC’s new Division 01 – General Requirements template to list all the required terms and conditions of the contractor’s work, providing clarity and helping reduce risks for contractors. “Up to this point, terms and conditions would have typically been placed in various places in the contract,” says Ackerley. “Now, some of the commonly-used ones have been taken and standardized to some extent to make them fairer, and grouped together. However, I caution contractors that they will need to read the entire contract much more carefully, to determine what exactly is expected and don’t assume all conditions are grouped in this section.” Ackerley also warns that even though this change has been made in an attempt to simplify and reduce conditions, some owners may place as many or more supplementary terms and conditions as they did the past. Assal notes that this is because some owners and their consultants or legal counsel have been reluctant to accept that the Division 01- General Requirements are part of the contract as they are quite technical, but with the updated official CCDC bundle, this will hopefully change.

Terms relating to the right of early occupancy, for example, have sometimes been very numerous, unclear and even arbitrary in contracts in the past, and this was potentially a source of friction and dispute. To help with this, the new template attempts to standardize reasonable conditions for early occupancy.

Updates to complimentary contracts
With the recent roll out of the CCDC-2, there will be a need for further clarification and modifications in other complimentary CCDC contract templates for all related contracts, such as contractor-subcontractor, client-consultant and client-architect contracts. “When the main contract template is updated, it’s the start of a new cycle to make sure all other documents are consistent with it,” explains Canadian Construction Documents Committee secretary, Eric Lee.

“CCA has a working group that is close to finalizing the new CCA 1 Stipulated Price Subcontract,” he adds, “and it could be released this year. Other comments received from CCA members are being carefully examined.” The CCA working group tasked to update CCA 1 consists of representatives from different sectors and CCA members who had submitted comments on the working drafts.  In the interim, the current CCA-1 2008 version will still work with the new CCDC-2. Glass Canada will follow developments closely to keep readers informed.

Fair allocation of risk
Glazing contractors frequently complain that financial and legal risk in projects is passed down to them through the terms of contracts they feel forced to accept in a competitive environment. It may surprise them to know contractors feel much the same way about the terms they see from project owners. In his keynote speech at Buildings Week in late 2020, Geoff Smith of EllisDon complained about the decline of an ethic of mutual cooperation and seeking the common benefit in favour of short-term financial gains and an impersonal, transactional approach. The goal of the CCDC and the recent changes is, in part, to make responsibilities more clear, allocate risks more evenly and create a framework for agreement that leaves less room for dispute down the road.

Contractors, subcontractors and project owners are probably not going to be holding hands and singing Kumbaya any time soon, but the updated CCDC looks to be a step in the right direction. •