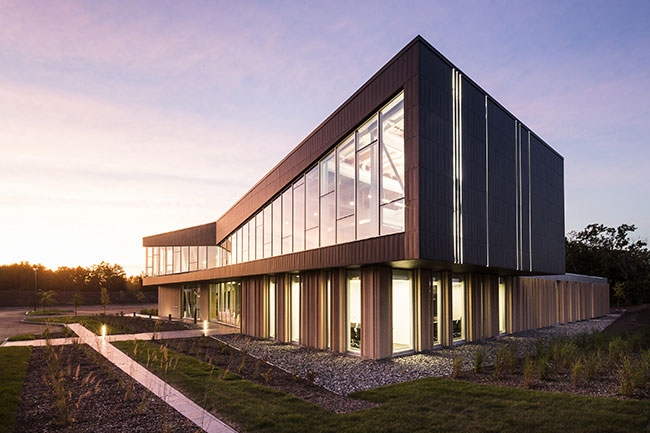 Unusual angles created some challenges for the glaziers. Careful planning and proactive discussion made it all come together. photo credit: Jonathan Robert

When Lemay’s architects set out to design a new office building for construction firm Pomerleau in Lévis, Que., in 2016, they knew they wanted to do two things: bring the outdoors inside and promote a sense of collaboration and connection between employees.

Now that it’s done, it’s clear they’ve accomplished those goals with a lot of help from the Multiver glass that Lévis-based contractor Vitrerie Univerre used.

The two-storey building contains fully glazed office spaces and conference rooms shared among three wings. Each of those wings frames floor-to-ceiling views of the neighbouring forest and gravitates around a central courtyard. All four sides of the building are abundantly fenestrated, particularly on the southern, eastern and northern facades, filling the open-concept space with tons of natural light. The facades that face the highway feature judiciously punched windows to control bright rays of sunshine and surrounding noise. The facades on the inner courtyard are entirely made of windows over two levels. This was done to reinforce the relationship with the existing natural forest and to unify the building’s three wings around it, says Lemay architect, Denis Tessier. “As a result, building occupants enjoy views of the courtyard forming the heart of the project, as well as activity elsewhere in the building. This accentuates a sense of fellowship and collaboration.”

For the most part, Vitrerie Univerre used a sealed unit, 25.4-millimetre-thick product made of six-millimetre clear tempered glass with low-E select 40 on face 2 and argon-enhanced black Technoform spacers. This is a high-performance composition and is not so grey or green-tinted as to negatively affect user comfort. For the spandrel sections, they followed a shadowbox principle with a sealed unit of ultra-clear, 22.2-millimetre glass made of clear six-millimetre exterior glass, black argon-enhanced Technoform and Optiwhite six-millimetre tempered glass with white Cerafrit coating #20-8101 on face 4. They used ultra-clear glass so that they could preserve the white appearance of the Cerafrit, which otherwise would have taken on a greenish hue from the glass’s natural tint.

Overall, it was a relatively smooth install for Vitrerie Univerre, but there were a few challenges. First, because there were interior alignments to be respected, the angled sections of the south facades and those facing the inner courtyard took extra care. Second, the positioning and precision of the west facade’s punched windows were somewhat demanding since everything needed to align with the metallic facing on the upper level. The glass joints between facades were also a challenge because the angles were often non-standard and needed to be made of structural silicone joints. Vitrerie Univerre was well aware of these challenges ahead of time, though, which made overcoming them much smoother, says Gabriel Tessier. “All of them were discussed beforehand at the kick-off meeting so that the sub-contractor would be advised of all the particularities. Details were then reworked to facilitate and better control installation and outcome.”

The result is a stunning, light-filled building that’s not just getting praises from Pomerleau employees. Late last year, it earned Lemay an Excellence Award from the Ordre du Architects du Quebec and an American Architecture Prize.

About the contractor
Vitrerie Univerre was founded in 1987 and is located in Levis, Que., on the south shore of the St. Lawrence River, opposite Quebec City. It specializes in the manufacture and installation of aluminum doors, frames, windows and curtainwall.