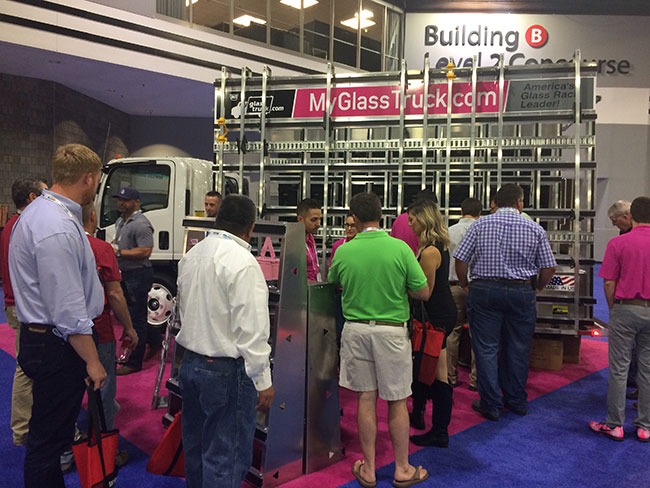 At 483 exhibitors and 10,000 registered attendees, even a hurricane can’t keep GlassBuild from being the annual must-see event for the North American glass building industry. Exhibitors and presenters were bullish on the market’s prospects for the near term.

Irma came, saw and kicked some serious glass. Without a doubt, Hurricane Irma had a major impact on the 2017 GlassBuild America trade show held in Atlanta, Ga., from September 12 to 14. Attendance figures weren’t available at press time, however pretty much every attendee had some sort of flight casualty story including cancellations, major delays and insane landings.

For the most part, many exhibitors were spared Irma’s travel nightmare because they arrived a day before the storm hit to set up their booths. Before the event opened, some shared that they had hoped the show would have been cancelled. National Glass Association president, Nicole Harris, made the right call and opened the show. It must have been a hard decision but it was absolutely the right one. With what was expected to be the largest show since the Great Recession made up of 483 exhibitors and 10,000 registered attendees, only a handful of exhibitors cancelled (barely noticeable on the huge show floor). Day One was quiet but the storm passed, the sun came out and the second day was solid. Equipment suppliers exceeded their sales expectations signaling confidence in the market. Several exhibitors moved their receptions to Day Two so the show floor was a party in the afternoon.

Credit should be given to the NGA for going over and above the call of duty and turning what could have been a disaster into a tremendously successful event.

Some of the educational opportunities took a hit with presenters cancelling, however organizers scrambled and found solutions to make the sessions work. Glazing Executives Forum keynote speaker, Julie Schimmelpennigh of Eastman Chemical Company couldn’t make it in person, however she provided her excellent State of the Glass Industry presentation live via video conference.

The biggest news of the event was the announcement that the NGA and GANA associations have come to an agreement on merging their organizations and are putting the proposal to their memberships for a vote. Assuming the proposal is adopted, the long overdue merger will surely strengthen and unite the North American glass industry. There were also a lot of rumours about a CEO from a major multinational fabricator stepping down in the near future and other chatter of additional mergers and acquisitions.

Keynote speaker, Cam Marston, presented a hugely insightful opening session on the multigenerational workplace. Marston provided vision and takeaways for managing Millennials, Generation Xers, Baby Boomers and, in some cases, Matures, who may all be working under the same roof. Turns out, one size does not fit all. Marston also raised the flag on the mass exodus of Baby Boomers out of the workforce. “In the US, there are 2.5 million Baby Boomers set to retire – 10,000 of them a day,” said Marston. “The baby boomer generation has paid its dues and earned the right. They are looking forward to retiring. Many are leaving earlier than expected due to health issues. The Baby Boomers have wisdom. They have skills as well but most importantly for your business, they have wisdom.”

The economic forecast “Navigating the Crust,” provided by Alex Chausovsky of ITR Economics, was an absolute highlight. “The U.S. economy is going up a wave and will crest in early 2018 and then decelerate over the course of next year,” said Chausovsky. “We’re going to face some mild recessionary pressures but nothing to be too worried about. In 2019, we are expecting a couple of quarters of negative activity. So by traditional economic definitions, that’s a recession. In reality, it’s just a mild pause in the growth of the U.S. economy. It’s not going to be anything as turbulent as what we went through back in 2008 and 2009.”

“I want you to walk away with an optimistic view of the next six to nine months with a view towards expansion of your business through the end of next year. Then prepare to make the necessary decisions to get you through the mild recession and get your company ready for more growth in 2020 and 2021.”

On politics, Chausovsky isn’t overly concerned about political implications for the U.S. economy until something concrete comes down from Capitol Hill. “Warren Buffet’s response to politics is ‘Red or blue, I can still make green.’”

According to Chausovsky, the oil market is still fairly oversupplied. “We have massive inventory levels and unless some crazy black swan event happens, we’re not expecting any major movement in the price oil over the next 18 to 24 months.”

Originally from Russia, Chausovsky told the audience that Russia is coming off a two-year recession but is still overly dependent on oil as a driver of their economy. “The position and actions of the Russian president, Mr. Putin, do not make any economic sense. People ask me all the time ‘What is your expectations for Russia?’ my response is always ‘I don’t know, I can’t forecast crazy!’”

The economists at ITR Economics strongly believe that the United States is facing the prospect of a Great Depression and have been sounding the alarm in their forecast every GlassBuild for several years. “I’m talking about 1929 by the time 2030 rolls around,” said Chausovsky. “We have a significant change of demographics happening in this country. On top of that, we continue to live beyond our means. We continue to be a debt-driven economy. Until we fix those things, the reality is we’re going to have a significant price to pay. Politicians are going to have to cut spending across the entire federal government in a meaningful way. And they are going to have to raise taxes. Whatever tax reform they are talking about now is not long-term sustainable. They are going to have to raise personal and corporate taxes. When you have the combination of cutbacks in spending and higher taxes, we have 1929 all over again.”

Key actionable takeaways recommended by Chausovsky include budgeting for continued economic expansion through 2018. Be willing to take risks and invest in your business over the next two quarters. Hire sales people to grow as the economy accelerates then slows. Add new products as new ventures buck the business cycle decline. Make sure your training and retention programs are top-notch. Budget for higher wages and costs. And raise your prices!

Rich Porayko is a professional writer and founding partner of Construction Creative, a marketing and communications company located in Metro Vancouver, BC. richp@constructioncreative.com
Print this page