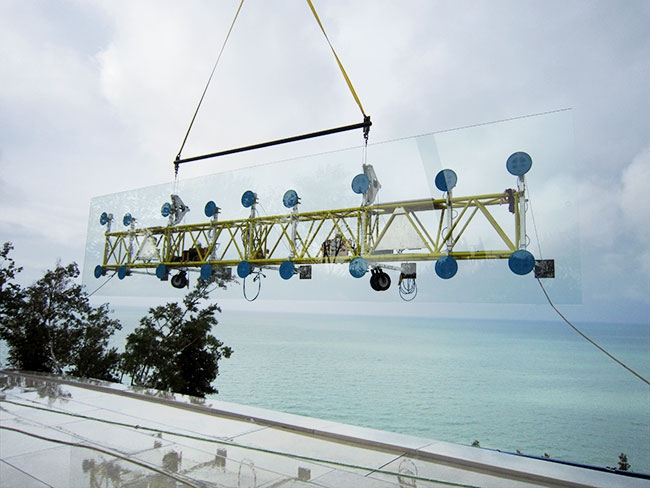 Big, unbroken vistas are great architecturally, but it’s gotten to the point where contractors are having to build their own custom machinery to install them. Here, Explore1 designed a counterbalanced dual-vacuum lifting system to install a 45-by-10-foot panel weighing 5,600 pounds.

Stunning unbroken views of vistas or store interiors – that’s the demand driving the production, shipment and installation of large panes of glass today – panes as much as 20 feet across and thousands of pounds. Agnora, the largest-capacity glass fabricator in North America, has seen a tenfold increase in the demand for big glass over the last five years. Vice-president of operations Jeff Wilkins says this includes both storefront and residential markets right across continent. Agnora is able to temper, machine, laminate and insulate various thickness of glass up to a maximum size of 130 by 300 inches. The company’s two main challenges of with glass (float glass availability and shipping) have been handled, says Wilkins, through creating strong partnerships with suppliers and by working collaboratively with shipping partners. “Big glass is heavy and dangerous therefore we are very serious about our maintenance and upkeep of our lifting equipment and designing our work flow to minimize the amount of manual lifting,” he explains.

Michael Byrne, president of Explore1 in Concord, Ont., notes that there have been large pieces of glass used in buildings since the 1970’s, but agrees that new markets are now picking up. “Big glass is now showing up in people’s homes because they are wealthy enough to afford it,” he notes. “There’s also a lot more use of big pieces in high-end retail. You didn’t see that ten years ago.” He notes that while large pieces might be only a tiny percentage of the total glass in a large building, they’re popular because they provide such huge architectural impact. “These pieces can cost upwards of $20,000 and have to be perfect through the install,” he says.

Steve Laird, a safety instructor at the Ontario Industrial and Finishing Skills Centre (OIFSC) in Toronto, notes that if the large pane is to be installed on the outside of the building, cranes are most often used with all personnel using the equipment involved certified in all procedures. “Large suction cups of varying configurations and capacities are used successfully for most of these installations,” he observes. “If the glass has to be brought into a building, say for an atrium, you’re looking at different kinds of equipment. Capacity is an issue as anything over eight tons has to be operated by hoisting engineers. With less than eight tons, glaziers who have been trained and certified as zero-to-eight-ton operators can do the job.”

OIFSC has provided training for zero-to-eight-ton operators for about six years, with the course consisting of five days of theory as per the Ministry of Training, Colleges and Universities guidelines, plus hands-on time. The centre has a Spydercrane with a capacity of 6,400 pounds with a glass manipulator that can either be mounted directly to the boom or attached with the hook. “There are several other places to get the training,” Laird explains, but stresses that “it should be done by someone who is certified.”

For his part, Byrne notes that if you search the internet to see how very large pieces of glass are installed, you’ll find many different “very interesting” approaches, but he believes most of them have one thing in common: they put workers and the glass at risk. “You don’t want a situation where installers are exerting a lot of effort because it can lead to error due to exhaustion,” he explains. “Some companies use below-the-hook lifting devices, but Explore1 takes a different approach.”

Back 20 years ago, they used modified robotic lifting technology (designed for curtain wall panels about 10 by 30 feet) for big glass jobs, but about seven years later, in 2003, they took the bull by the horns and developed their own technology – the world’s first counterbalance suction cup lifter. “We had no choice but to take on the challenge of designing our own lifter because there was nothing available that could lift glass in excess of 2,800 pounds,” says Byrne. “There was also nothing that would allow the easy manipulation of glass or curtain wall panels when a crane can’t be used due to an overhead obstruction.”

The Explore1 counterbalanced lifter features an eight-cup vacuum array and hydraulic rotator that can handle loads up to 4,800 pounds up to 60 feet in the air, allowing the installer to safely and efficiently bring the load into the same plane as the frame. The lifter has been used to install over 200 insulated glass units weighing 2,500 pounds or more, in every imaginable situation.

“The lifter does have a learning curve and doesn’t function like a normal lifter,” Byrne explains. “You have to be careful when first lifting the glass. Teamwork is the biggest thing. It’s critical to have a calm and competent and confident group where everyone knows what their jobs are and only does their jobs with no rushing things.” He believes the fact they can do these big install jobs so easily and efficiently now is a big cultural industry shift. “Yes, there is lots of planning, and we don’t sleep the night before we install a big piece and everyone is excited,” he says, “but it’s a huge feeling of satisfaction.”

An example of one of these big jobs was a massive, 20-by-nine-foot, six inches IG piece to be installed at a luxury home north of Toronto. It replaced a pane installed by another company which had developed an interior shatter due to a rare nickel sulphide inclusion. “For this job, we were able to pick up and float the damaged unit right out of the frame,” Byrne says, “placing it next to the disposal point to help prevent more traffic around the property. We then picked up and gently placed the new IG unit in without issue.”

Big, unbroken vistas are great architecturally, but it’s gotten to the point where contractors are having to build their own custom machinery to install them. Here, Explore1 designed a counterbalanced dual-vacuum lifting system to install a 45-by-10-foot panel weighing 5,600 pounds.

Another job involving a pane 46 by 10 feet and over 5,600 pounds required the development of a whole new lifting system and process. “It was a confined interior space with low head room and limited floor capacity and we had to develop a system to move the lifter easily from exterior to interior,” Byrne says. “We ended up creating a lightweight, modular, self-hoisting lifter with counter-balancing capability. It’s over 40 feet long and rolled on balloon wheels through the opening and we simplified it with two inboard 5,000-pound hoists. We also designed a two-axis sliding rail mounted to the ceiling, which allowed the installer of other glass units to flush glaze the monster pieces at the opposite ends of the room.”

In addition, for situations when it’s not possible to use a crane, Explore1 created an “end effector.” It’s mounted on a forklift and features a five-axis hydraulic manipulator to control loads as heavy as 2,700 pounds. “You can do complex manipulations like flush glazing into a pocket at the jamb, head or sill,” says Byrne. “The end effector can also be used to move glass through doors, holding the load parallel to the ground and then swinging it up into position once the window opening has been reached.”

The size of Explore1 crews on big glass installations ranges from six to 10 people depending on traffic control and whether workers are needed above or just below. Byrne says everyone makes sure to have a route of escape and stays out of the danger zone and that platforms have to account for this necessity. “There’s always a chance of massive mechanical failure,” he notes. “We harp relentlessly on how to be safe with vacuum lifters and do lots of maintenance. We’ve never had an accident with one.”

Byrne believes that as long as the economy can support it, the trend of big glass will continue, with cost lowering and the comfort of professionals increasing over time. Wilkins agrees. “Engineers and architects are continuing to design big glass into residential, commercial and institutional projects,” he says. “North American glass float plants are recognizing this demand and are starting to increase their size capabilities. Europe has always been ahead of North America in the use of large glass. Today, the standard size float glass in Europe is six meters and trending bigger, and I think we are starting to see the same trend in North America, moving from four to five meters to over six metres.”