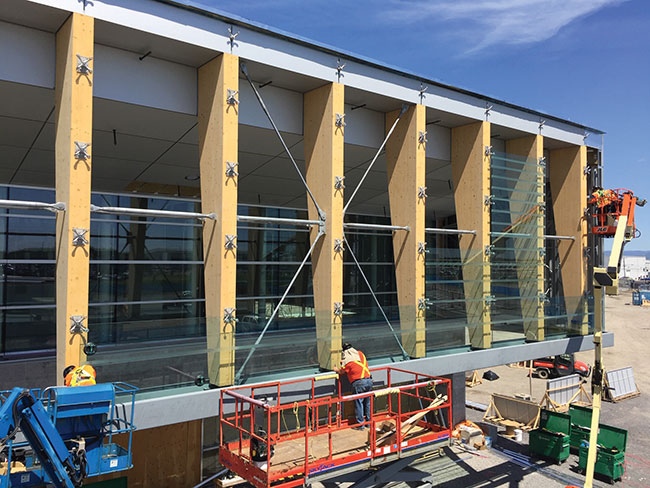 Over the last ten years, Quebec City Jean Lesage International Airport has undergone an extensive expansion, with a state-of-the-art glass addition to the passenger arrival area requiring innovative solutions from the structural glass engineering firm, CPA Structural Glass of Montreal. For this project, the company started out as a client of GLCRM Architects, then was released to offer its engineering expertise and hardware supply to bidders. “We ended up working with Epsylon Concept, a glazing contractor from Quebec City,” says CPA president, Bethanie Cloutier, “so we were involved from start to finish, which is the real way to work these projects.”

A total of $500 million was spent on expansion and upgrades at the airport to keep it aligned with evolving industry standards and to provide an optimal passenger experience. The terminal area was doubled and more dedicated baggage carousels were added, for example. Other upgrades include a more user-friendly customs area, expanded food service and a state-of-the art curbside passenger arrival zone.

Over the top of this main passenger area, a glass partition/screen was added: an architectural feature intended to particularly showcase a new underlying wood structure suspended from a cantilever roof section. “The concept and installation of this point-fixed glass screen was very challenging,” Cloutier says, “due to unusually high differential movements induced in the wood structure (wind, earthquake and thermal loads).”

The fact that the screen needed to be suspended from a cantilevered roof meant compensating for fabrication and installation tolerances through the use of a versatile, highly-adjustable interface between the spiders and the wood columns, designed and supplied by CPA. Cloutier explains that “while the top of the of the wood structure is anchored to an insulated structure, the bottom link and cross-bracing between the columns are steel, exposed to the elements and therefore subject to a lot of expansion and contraction even with the presence of control joints. So, the in-service change in geometry was challenging and had to be accommodated by sizing the gaps between the panels to permit those movements.’’

The glass panels of the screen were installed using four Sadev rotules assembled to spiders, which in turn, were bolted to the adjustable interface carefully positioned on the wood columns. Cloutier and her team worked closely with the structural engineer to obtain all the essential information on the behaviour of the structure through its life cycle. The interface parts were screwed in place once the structure was surveyed, and there were adjustments made (plus/minus 25 mm out of plane, 10 mm horizontally and seven mm vertically). Very precise lines were required for screw anchor installation, but the team also had to account for minimum edge distances to ensure each screw was properly secured. “To add to the complexity,” Cloutier explains, “variably spaced horizontal ceramic fritted lines on the glass panels had to be coordinated for installation with precision, as well as for all the holes needed for the letters of the airport’s name to be bolted to the glass. At the expansion joints, conditions enabled at one location to simply separate the wall into two independent facades, but in other places, standard spiders were modified to allow for large horizontal displacement at their mounting points.”

The overall airport upgrade received an INOVA award from the Urban Development Institute of Quebec. These awards recognize innovative buildings that have a significant impact on various real estate sectors. Chief among the attributes celebrated was the fact that the project involved a Building Information Modeling (BIM) approach, the first time that it had every been used in the province for such a large undertaking. Also recognized was the sustainability of the new airport, which harnesses geothermal energy, automated lighting, heat recovery and more.

Design and installation of the YQB passenger zone façade was very rewarding, says Cloutier, due to its many technical aspects. She attributes its success “to an incredible team effort from the beginning of the concept with the architects and structural engineers, to the training of the installation team on-site.”