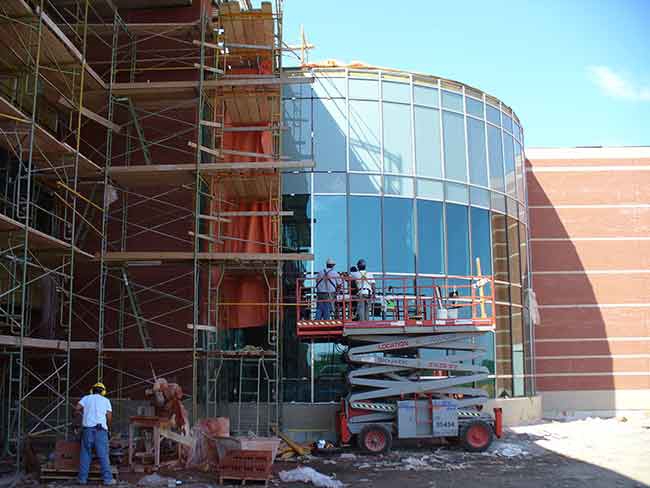 National Contract Glazing has landed major projects all over the Ottawa. Retaining key employees has enabled it to take advantage of a steady stream of work on ICI projects. Expertise on the job site leads to success and fast completion.

When National Contract Glazing’s John Bastedo is asked what’s unique about the company, he doesn’t hesitate. “It’s the people,” the vice-president states firmly. “We have a process to put a job through, with many people involved. Each job is passed on, and this keeps us on top of jobs and also shows contractors we are on top of things, which builds our credibility. We are proud of our excellent track record of project completions ranging from less complex store-fronts and entranceways, to multi-story, multi-phase contracts in both the private and public sector.”

National Contract Glazing was formed in 2000 by Bastedo and president Jean-Guy Tremblay at a point when both men had already been in the industry for twenty years, Jean-Guy as a site supervisor and Bastedo as a manager at various companies. At that time, they were working together again after also having worked together at another company in the past, and they found it was a combination of factors made the option of doing their own thing very attractive. “The company I was managing was amalgamating all its branches to be under one roof in Montreal, and that left both Jean-Guy and I as their only employees outside Montreal,” John remembers. “We both stayed on, and I did several years of travelling across Canada and into the U.S., but then they wanted me to move to Montreal and I didn’t want to do that. I went with another company but I didn’t see a future there, and Jean-Guy had started a business, so we took the plunge and formed a partnership. We didn’t draw a salary at first, we kept working for our employers at the same time. We both had many contacts with general contractors, architects, estimators and so on, and Jean-Guy knew the site and shop personnel. We started with small jobs, with people who knew us throwing us some bones, and away we went.”

Bastedo says they’ve always had a really good partnership, with a clear dividing line of responsibilities along with great communication. “I have to know what’s going on onsite and figure out estimates but I’ve never worked on site and neither of us tells the other what to do,” he explains. “I get the business, Jean-Guy gets it done.”

Soon after deciding to start their own firm, they found Kathy Knox, who continues to serve the company today as office manager and book-keeper, and added more employees as time went on. “At first, our work space was so small, we couldn’t even turn around an aluminum extrusion 24 feet long,” John recalls. “We could do small jobs but it really limited us. So then we got an industrial space and have been there ever since. We try to run a lean ship with basic equipment, but at the same time, we have everything needed to work efficiently. We’ve partnered with a company that does only fabrication that increases our capacity enormously without having to renovate or expand.”

Bastedo says they don’t do a lot of advertising as the work comes to them. “We’ve grown to a comfortable level that our overhead will handle,” he says. “Sometimes it’s a struggle to get enough work but we’re equipped to do the work with the people we have. The whole business is based on our people and our capabilities and we really value them. And if we let them go, we’ll never get them back.” John really wanted others in the company to have the opportunity to include their voices in this story, which says a lot about the company atmosphere, and here are the responses from some of them.

Staff reflections
Office manager Knox recalls that at the start, “We were renting a very small space, so small that Jean-Guy, John and I shared two desks. We’ve gone from 15 employees in total to, at one time, 81. All our projects have numbers and one thing that sticks out in memory is our first job over one million dollars was number 100. Very appropriate I think.”

Chief estimator Michel St. Denis first met Jean-Guy and John 20 years ago when he was a draftsman fresh out of college. Later, when NCG had formed, Michel was asked by John over breakfast one day if he would like to join the team. “This summer will mark 11 years from my hiring,” he notes. “I primarily work daily with John, and the combination of our many years working together is a strong reason for the success of NCG. Together, John and Jean-Guy have created a company that has a friendly, comfortable and respectable work environment.”

Bastedo calls Keith Cowan the company’s “catch-all” guy, who is responsible for health and safety, IT, invoicing, cost monitoring and also filling in for John when he’s away. Cowan was initially brought into NCG as a project coordinator, but says he was also explicitly challenged from the start to take his business management experience and look at all aspects of the company’s operations with an eye to improving efficiencies. “The aspect of working at NCG that I value the most is the feeling that we’re all willing to be actively involved as members of the team,” Keith says. “This starts with Jean-Guy and John and their eagerness to truly empower all of us to be effective. Being a mid-sized company, there is no “corporate” feeling, and therefore day-to-day issues are dealt with promptly, efficiently and with the direction and help of the owners as required. It may sound like a cliché, but I truly do believe that NCG’s greatest strength is the incredibly strong team dynamic that Jean-Guy and John have fostered. I believe that it is this dynamic that has enabled NCG to mature as a glazing contractor that excels at completing highly complex projects.”

NCG has one senior project manager, Ron Coppens, and two others, Jason Georganas and Alex Wertwyn. Georganas says “The reason I chose NCG was because of the personnel and reputation they have. What I found unique is that they do not have a turnover of personnel. In the nature of this business, this is irregular to be able to maintain the same team for such a long time.” Not long ago, Wertwyn was offered a project manager position after working for NCG for some time before that and being encouraged by John and Jean-Guy to take formal project management training. “Knowing the amount of effort I had put in to my work while continuing my education and then, in time, being offered this position,” Alex notes, “has given me the sense that a bright future here is both possible and likely if you’re willing to work at it. The perseverance, patience and collective knowledge of those who run the show around here have helped me to succeed in my current position. We have a strong team with good values.”

National Contract Glazing has landed major projects all over the Ottawa. Retaining key employees has enabled it to take advantage of a steady stream of work on ICI projects. Expertise on the job site leads to success and fast completion.

Evolving industry
Over the years, Bastedo says a major change they’ve dealt with is the evolution of curtainwalls. “We’ve had to keep up with the new products and change how we are doing things,” he explains. “It’s not that we are designing but we have to understand what the designers are trying to achieve and we have to keep up. It’s all about performance, low-E coatings, different types of glass and aluminum doors. The array of products is always developing and it’s almost endless. The building code is becoming more stringent too, and you also can’t use things that were used in the past.”

He notes that being in Ottawa has been positive in that it’s always busy. “If it’s not government building work, there is infrastructure, institutional or commercial. You don’t get the severe downturns you might see in other markets.” At the same time, Bastedo is clear that some years have been just break-even. “It’s challenging mentally, and you wonder why you are working hard but you need to maintain your team,” he says. “Collecting money can also be interesting. You’ve got to know who you’re working for. And early on, we found it a bit difficult to expand, as the banks wouldn’t lend us money, just a line of credit.” About 18 months ago, John and Jean-Guy decided to hire another estimator, and it’s been a very good move. John says with two estimators, they are twice as likely to get projects and their volume of work has gone up.

Employment on-site is one of the biggest ongoing challenges. John says all NCG site workers are unionized, and Jean-Guy’s long experience onsite and with the union has provided him with solid knowledge of what individuals are capable of and who works well with whom. Another long-term employee, senior site superintendent Ross Tobin, assists Jean-Guy in ensuring the sites are running smoothly. Tobin worked with both Jean-Guy and John in the past and brings invaluable experience to the table. “We have built a solid core of site supervisors over the years,” he says, “along with a strong team of site workers that enables us to handle jobs of any size and complexity.”

John, Jean-Guy and the rest of the NCG team are looking forward to 2016 as another opportunity to build on their reputation.