From small contractor to major fabricator 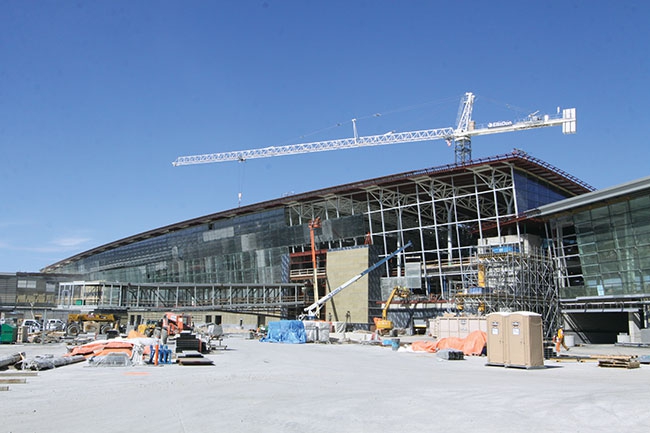 The Calgary airport project marks the finishing point in Contract Glaziers’ evolution from a glazing contractor into a manufacturer of high-tech curtainwall. The airport features a complex double envelope that reacts dynamically to control UV and airflow.

There are many stories out there of businesses with humble beginnings that went on to become major success stories. These stories have some elements in common – hard work, risk-taking, seizing opportunity and forging new ways forward, just to name a few. While some business histories may add in these elements, embellishing here and there, all of these elements and more are truly part of the story of Windsor, Ont.-based Contract Glaziers, which began in 1971 as Windsor Glass.

There are many stories out there of businesses with humble beginnings that went on to become major success stories. These stories have some elements in common – hard work, risk-taking, seizing opportunity and forging new ways forward, just to name a few. While some business histories may add in these elements, embellishing here and there, all of these elements and more are truly part of the story of Windsor, Ont.-based Contract Glaziers, which began in 1971 as Windsor Glass.

“My father Jan came to Canada in 1969 from the Czech Republic with my mother Alexandra and two children, and he borrowed $500 to start his company,” explains Contract Glaziers CEO, Michal Chlumecky. “He worked very, very hard and built a very successful business, taking it from a small local full-service glass shop into a small contract glazier. It was amazing what he accomplished from nothing.”

Michal began cutting glass for his father when he was 10 and also spent his teenage years working at the family business. Of his education after high school, he says, “I wanted to be an architect but I didn’t have the artistic talent for it. I was told I would make a great engineer, but I ended up with a degree in commerce and economics, and I envisioned working for a big bank in downtown Toronto. In my youth, I thought it would be glamorous.” Meanwhile, his father had continued to grow the company, and by the time of Michal’s university graduation, Michal felt his path laid in taking the family company further forward. “I was in knee-deep before I knew it, and I’m glad it worked out the way it did,” he says. “To be part of something my father worked so hard on, and to have transformed our company from a glazier into a high-tech curtainwall manufacturer and contractor is something that I’m extremely proud of.”

That transformation began not long after Michal joined the company on a full-time basis after graduating from university. Michal could see big opportunities – if, and only if, some problems could be solved and an ambitious strategy put in place. “We knew that if we did our homework well and we were intelligent about it, we could compete as a curtainwall manufacturer,” he explains. However, when they looked at the jobs they were beginning to take on, there was a problem. Of all the company’s costs, the biggest one was highly-skilled onsite labour. It was also the company’s biggest risk factor.

Solving the problem would not be easy. While highly-skilled labour was expensive, the availability of workers who could install curtainwall was very low at that time, in the late 1980s and early 1990s – and on both sides of the border. The hard truth was that this labour pinch could make or break Contract Glaziers. It had to be dealt with.

One way to mitigate the risk would be to simplify the entire process so that the need for highly-skilled employees in the field was much reduced. It was a big change in focus, to bring the production of unitized curtainwall in-house, but one Michal saw as the only option. It was no small capital investment to create the manufacturing plant and hold large amounts of inventory – a risk in itself – but it worked out. In setting this course, Michal had set Contract Glaziers apart. Loosened from its labour shackles and with new strengths to build on, the company was able to grow by leaps and bounds.

While Michal’s father Jan was uncertain at first about the change in focus, he came to see what a systematic change from a simple glazier to a curtainwall engineering and manufacturing house would mean. “It took some discussion, but I knew we needed to change, that you can’t be all things to all people,” Michal says. “It was scary for my father as it would be for anyone in that situation, but he came to see that when we weren’t distracted and doing work of all kinds, we could become experts at one element. We could focus on our strengths and continuously improve on them.”

Contract Glaziers’ growth in the early days came from mid-scale projects, where unitized curtainwall was not being used. But to make those early inroads, Michal and his staff had to convince those who designed and constructed these buildings to go with something new. “From both an architect’s and a building contractor’s point of view, it was uncharted territory,” he says. “We had to do a fair bit of salesmanship, pointing out the advantages from a performance and an efficiency standpoint. The architects needed to feel comfortable. But it helped that the unitized curtainwall presented a way to speed up the construction process, and that was attractive to the building contractors.”

It also helped, Michal says, that the pool of architects and contractors of mid-sized project that needed to be reached was fairly small. “And add to that, that there was an industry movement towards the use of unitized curtainwall,” he explains. “It helped create a general acceptance. More and more Canadian companies were using it in southern Ontario, and we in Canada were ahead with unitized curtainwall use compared to the U.S., so it all helped with getting the U.S. architects and builders to move in that direction.”

By 1992, Michal had established a U.S. office in Detroit and changed the firm’s name to one that would work both north and south of the border. Southeastern Michigan provided access to a market in excess of five million people within an hour’s drive. “There weren’t a lot of unitized curtainwall competitors there,” Michal adds, “so we could focus on perfecting our design and manufacturing capabilities.”

Part of the process of developing strength in unitized curtainwall manufacturing was the development by Contract Glaziers of modelling software. Having a computer model of a building would mean that instead of doing manual calculations for each piece of glass, which are both difficult to audit and time-consuming, the entire production process would be simplified. Custom-designed software would automatically bridge the model and the manufacturing process – seamlessly, quickly and without errors. By now it was the early 2000s, and Michal and his staff set to work scouring around for software tools that could be adapted. They eventually settled on a number of modelling software packages used in the automotive industry and hired people to make the changes they needed, keeping at it until it was right.

“Building information modelling has gained a considerable amount of traction over the last several years,” Michal notes. “While some may model for contract compliance, we model everything in order feed production. It’s an effective way to handle complex geometry, but for us it has allowed us to go direct from model to production quickly and efficiently.” He notes that the architectural community has also embraced modelling over the last five to six years as a valuable tool for coordinating all the trades. “It’s actually rapidly becoming a requirement from the construction and architectural community, so that everything is properly coordinated,” he says. “But it’s a core part of our business, allowing us to go directly to fabrication.”

Michal lauds his “incredible pool of employees,” who are strong in both advanced technology use and systems design. “We have brilliant people who are dedicated to the company, and I say without hesitation that our number one advantage is our people,” he states. “We have people who have been with us for so long and have been instrumental in the growth and development of the company. They are proud of Contract Glaziers and of what they have accomplished individually. I have nothing but the utmost respect for them. A lot of people say these things as a cliché, but I am sincere.”

One of the recent high-performance monumental projects that Contract Glaziers has taken on illustrates the complexity in system design and geometry at which the company excels. “The Calgary International Airport has a dual skin active outer wall, with a three-foot airspace cavity between them,” Michal explains. “It has integrated air louvres to regulate air flow between the two walls, and the way it works is state-of-the-art technology. There are temperature and solar sensors and integrated blinds that reflect the UV out in the summer and the controlled louvres allow convection airflow inside the wall space to keep the outer wall cool. In the winter, the blinds are angled to redirect the UV rays to superheat the air space and keep the exterior wall warm for occupant comfort.”

Other recent Contract Glaziers projects include the Halifax Library, which CNN named one of the top architectural designs in the world, and the Manulife Tower in Calgary. “We are working on it right now, it is unique in that its building footprint increases as you go up,” Michal says. “It has triple glazing with conical, concave and convex bent glass, and a very whimsical design. You couldn’t do this without proper modelling. Our modelling has allowed us to pursue projects like these with aggression across Canada and the U.S. market.”