Features Architectural design Contracting
A beacon in the neighbourhood 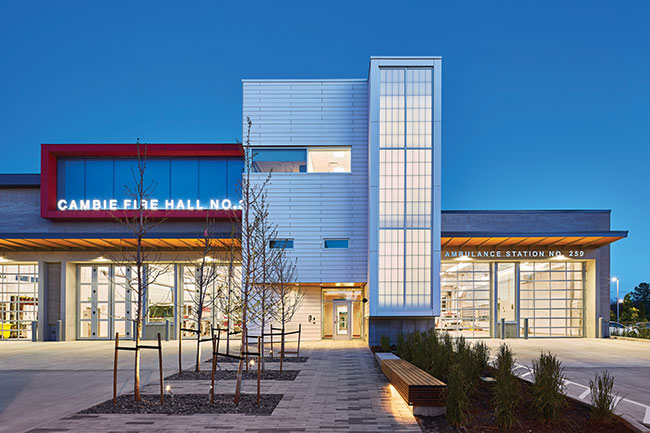 Natural light is used to create a soothing environment for first-responders in living quarters, eating areas and the quiet room.

The city of Richmond, B.C., is a busy place, just across the river from Vancouver, and when its firehall needed an upgrade city leaders decided it best to create a new combined emergency services centre. “It’s the first combined fire and ambulance station in the province,” notes Jon Fearn, business development manager at Flynn Canada’s Surrey office, the glazing firm.

To reflect the two emergency services housed inside, the three-storey building sports a distinct dual-folding roofline. However, the design also throws back to the historic roots of firehalls, with its bright red cladding on the upper level. It’s LEED Gold-certified and complies with BCBC 2012, ensuring it can act as a department operations centre where staff can provide response following a seismic event. In addition to having an earthquake-resistant structure, there are tie-ins for concrete aprons at the front of the building and an on-site emergency generator. The building received a notable mention in the Mixed-Use Facilities category in the 2019 Firehouse Magazine Station Awards. 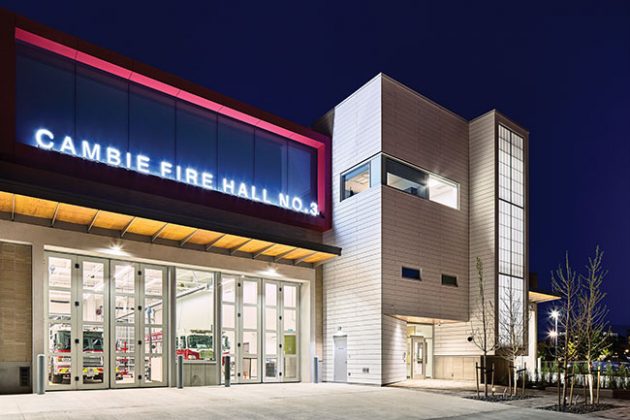 Glass was used to enhance the building’s transparency so its mass doesn’t loom over the street and create hard boundaries.

The magic inside
Within the building, there are six bays, two for fire rescue vehicles, two for emergency vehicle service and two for ambulances. The building also has sleeping dorms, offices, an exercise space and a quiet room that helps paramedics decompress after responding to calls. There is also an outdoor patio and, adjoining it, are the offices, kitchen and dining room, oriented to maximize incoming natural light to provide a soothing and connecting effect. Further natural light is used extensively in the training classrooms, where occupants can view both the site training area below and neighbouring green spaces.

The north stair tower, with its Guardian 275 translucent wall panel system, has been described as “a beacon for the neighbourhood.” Soft light fills the stairwell and produces a lantern effect from a distance. Architect Ralf Janus, principal at DGBK Architects, explains that glass features were chosen on the basis of providing transparency to the area, with the entire building serving at nighttime as a “neighbourhood symbol and presence.” Janus adds that this was achieved through “more glass [being included] than is typically used in a firehall or emergency response building,” and that “much design effort went into the light effects achieved in the evenings and through the night to create a soft but constant community presence.”

He adds, “as the building was going to have a large presence on the street, we tried to break down the mass by ‘eroding’ some of the corners with transparent elements, namely the glazing. This design also allowed the interior to feel somewhat less ‘bounded’ at the corners and thereby extends the
interior space.”

There were structural challenges using glass in these locations, says Janus, but, “excellent engineering gave us the desired solutions. The glass and fibreglass were used firstly for the usual reason of providing light to the interior, but also to create a feeling of openness from the interior by virtue of its placement at corners and edges.” Fearn notes that installation of the glass with the fibreglass panels is no different than other types of glass installation.

In the glazing, Flynn used products from U.S. Aluminum’s 2200 Series curtainwall, 550T Series doors, 7200 series casement windows and 3000 Series sliding doors which open onto a balcony. Of the entire project, Fearn notes, “it’s a great-looking building and certainly we’re very proud of it.”