Kits Glass takes the fancy designs and makes them stand up. 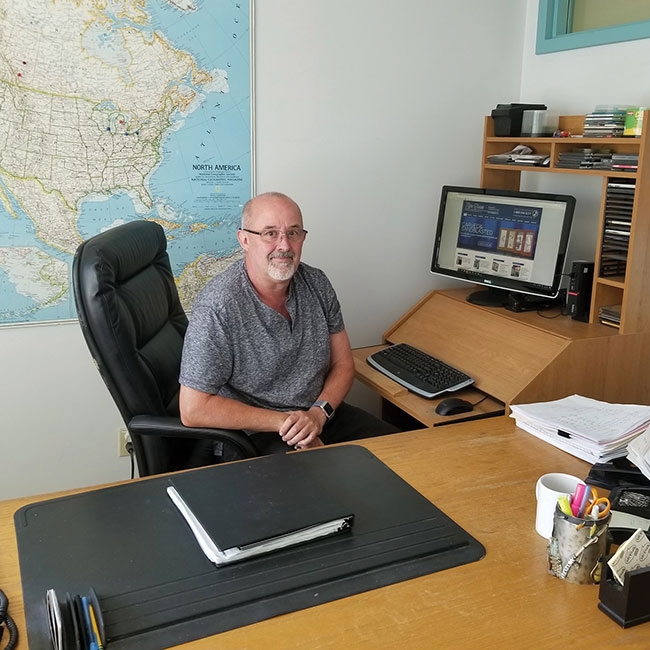 Paul Snelling has been at it for 37 years with no slowing in sight. He lands the artsy projects, but doesn’t have much interest in design himself.

A church in Guam. The airport at Anchorage, Alaska. The Great Wave piece that everyone sees arriving from international destinations at Vancouver International Airport.

Asked if there was any one project that stood out in his 37 years as owner of Richmond, B.C.’s, Kits Glass, Paul Snelling doesn’t stop to ponder. “No,” says Snelling, 61, in his office at the facility on Viking Way in Richmond. “We’ve done so many projects. Each and every one of them has its own interest. My interest is not as a designer. Mine is getting it built on time, on budget and getting it completed.”

After doing commercial glazing for a few years, Snelling split off and started his company, named after the popular Kits Beach on the Pacific Ocean off Vancouver’s waterfront. He opened in 1981 with a small 800-square-foot place on Cornwall Street – the main drag of Vancouver’s Kitsilano-Point Grey region – and remained in Vancouver for a decade or so before heading out to Richmond.

The original Kits Glass shop in Richmond was 17,000 square feet and Snelling stayed there for more than 10 years before moving to its current location in an industrial area of the city, a stone’s throw away from the Vancouver airport. The shop features a production facility, offices and a showroom.

“We used to be a lot larger but due to style changes in the decorative industry – where a lot of people are going for more textured kinds of panels versus traditional stained glass panels – we downsized that end and kept people that have been with us forever,” said Snelling. Kits Glass, today, employs 17 people, most of whom average more than 20 years of service with the company.

In 1981, Kits Glass produced decorative glass for commercial, residential and ecclesiastical markets in Vancouver. Before he even started manufacturing, the first thing Snelling was doing was repairs and restorations. He did all the main churches in Vancouver in the first few years.

“Over the years, they’ve sent me a bunch of business from design and manufacture and protective covers,” he said. “We do a lot of protective covers now because it’s so expensive for them now with vandalism, the heat loss through a single-glazed stained glass window and the noise.

“What we do is a protective cover made of a sheet of laminated glass that protects the windows from the weather and outside noise. They use laminate in sound studios to dampen the noise. The protective covers are also energy efficient, which is an added bonus.”

As Kits Glass became known for its high-quality products and reliable service, the company’s work began spreading across North America and overseas into Europe and Asia.

A natural progression for the business was to make its services available to door and window manufacturers who were unable to source a supplier offering a high-quality range of product at competitive pricing.

“Other than us selling residential, a very large part of our business is selling to door companies,” said Snelling. “We sell to all the wood door manufacturers in the Lower Mainland.”

Whether it’s a one-off custom piece for a homeowner or a proprietary line for a manufacturer, Kits Glass can and will design, manufacture, deliver and install. And do it in timely fashion. They are proud to be one of the premier full-service custom and production glass suppliers in the industry. Their products include wrought iron, sealed insulated glass units, blinds between glass, sandblasting and carved glass, stained and bevelled glass. As mentioned, they do a lot of commercial and architectural projects and install glass at churches and institutions. They also do exterior architectural glass for buildings outside, or lobbies inside.

“A lot of times, in commercial spaces, architectural glass is used for a lot of functions because it makes obscure something the owner doesn’t want to see while still letting in lots of light,” said Snelling. He gives an example of a Vancouver building his company worked on where you can’t see hydro poles and lines that were on the other side of a window, although the window is three storeys high.

Paul Snelling has been at it for 37 years with no slowing in sight. He lands the artsy projects, but doesn’t have much interest in design himself.

“After 36 years, we are probably the most diverse company in the country,” said Snelling. “There are people that have specialties and they are usually one- or two-man studios, but we’re fairly large scale in the country. After all these years, we have a stable of customers we work with. Our work gets seen and people call us because of it.”

Work schedules depend on the size of the project. “Project work could be three weeks,” said Snelling. “Our residential projects we turn around in three, to five, to eight weeks, depending on what the project is. We work very closely with a factory offshore that provides us with custom bevels we could not afford to make here.

“We fly in the parts. The question is, does the person want it quickly, or do they want it not as quick and a little bit cheaper? Then, we bring in an ocean shipment. Our big projects are about two to three years, but there’s probably only six months of fabrication.”

As we said at the outset, Kits Glass has done lots of work nationally and internationally. In Canada, its work can be found in buildings and residences in Calgary, Edmonton, Toronto and Ottawa. They’ve been to the U.S., where Kits Glass products adorn an oncology unit at a Cleveland hospital – a piece that started with strips of glass the height of the window, then every strip was cut to a shape so that when it stood up it filled the shape. There were hundreds of individual templates that had been cut, so the project required three-dimensional computer-aided design software. There’s also a piece at Ted Stevens Anchorage International Airport in Alaska.

Just down the road from its production facility, Kits Glass’ beautiful work can be seen at Vancouver International Airport, a piece called The Great Wave, which complements a sculpture by renowned B.C. artist, the late Bill Reid. “It’s the first thing people see when they arrive from international flights,” says Snelling. “It’s approximately 30 metres by 10 metres and probably took us, in actual fabrication time, about eight months. Usually these projects span a couple of years from start to finish. We did the install on it, as well. We worked with another designer, which is what we usually do on these projects.”

Kits Glass’ most recent large project, in 2016, was an award winner. The company cut stained glass sheets made in Germany, which were placed in each of the 204 panels of the Bell Spire project at Vancouver’s Christ Church Cathedral, located in the heart of downtown at Georgia and Burrard Streets. Built in 1894, Christ Church Cathedral is Vancouver’s oldest surviving church building. The bell tower is three-sided with one open side so people can see the bells that were brought in from France and the sound transmits better. For its efforts on the project, Kits Glass was awarded the Heritage Award (along with Deltic Electric, Scott Construction Group, Solid Rock Steel Fabricating Company and Tek Roofing) at the 2017 Vancouver Regional Construction Association awards.

Kits Glass’ colour glass comes primarily from two sources: machine-made which, up until recently, was made by a Seattle company: Spectrum Glass, the largest in the world in that industry. Spectrum, though, closed its Seattle operation and factory and moved to Mexico. The cathedral uses antique glass, meaning it’s hand-blown.

“It’s very expensive and comes from Europe, mostly from Germany,” said Snelling. “You’ll see a church with coloured squares and that could be Spectrum glass. If you see a church with a painted figure in it, it’s painted and fired. That’s traditional stained glass.”

Examples of the Bell Spire project can be found on the company’s website, kitsglass.ca, which also displays many examples of the standard designs
available from the company. It also shows the range of colours and materials that can be created on-site to capture the perfect showpiece reflecting the customer’s personality and character. All designs can be customized with matching sidelights, windows, transoms, partitions and room dividers. Sales and marketing employee Hala Helmy helps maintain the website, which gets Kits Glass noticed
worldwide.

It’s been a great 37-year run for Snelling and his company, and he sees no reason why Kits Glass won’t be around in another 37 years. “Yeah I think so,” he says, again without hesitation. “With the depth we have here, we would be crazy not to be. We’ve paid our dues, we are very well known, and the work comes in  on a pretty regular, steady basis.”