Features Architectural design
Under the Glass: No fear The owners of Griffin Glass are “not scared to try anything.” 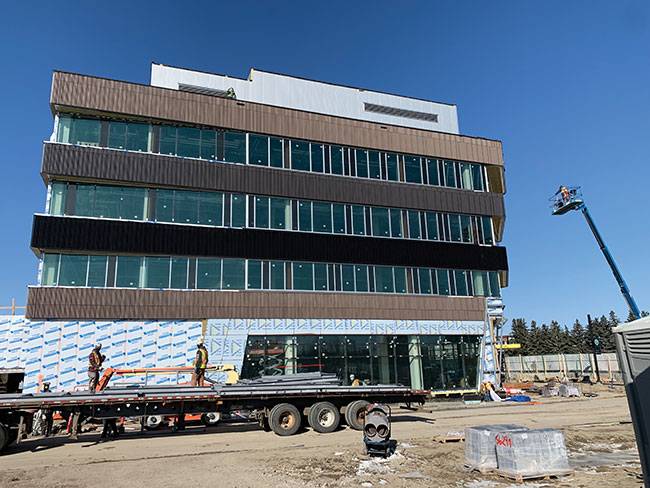 The owners of Griffin Glass have aggressively grown their business with a “young mentality.” That’s enabled them to land some high-profile projects, like this one in Calgary’s University District All Photos credit: Griffin Glass

AT A GLANCE | Griffin Glass

While Trevor Whyte may have had his start in the glazing world at the family business as a teenager, he’s gone on to co-own his own booming business, which he and his business partner, Travis Ward, have grown significantly in both size and capabilities. Griffin Glass, first started in 1960, now provides a full range of glass and architectural metals for industrial, institutional and commercial construction projects. It was one of Alberta’s first construction companies to acquire a certificate of recognition for safety.

Whyte was only 14 years old when he started working at his father’s glass company in Calgary: Metro Glass Products, a firm started by his grandfather. As many young family members do, he began by sweeping floors. Eventually, he was moved into fabrication, but Metro Glass was more of a supply than a fabrication business. And because Whyte found he liked the challenges of fabrication, he branched out to become a certified glazier.

His apprenticeship began at some smaller local glazing firms, but when approached by Griffin leadership to come and work there, Whyte decided to take the offer. “I made the jump in 2000 and slowly worked up the chain from there,” he says. “I obtained my ticket in 2005 and Travis also earned his journeyman ticket at Griffin around that time. I offered to purchase shares in 2009, and then the previous owners announced that they wanted to transition out. A few years later, Travis and I were the sole owners.”

So, what were a couple of smart young men with a passion for glazing to do with a company that, while well-established, was small in terms of projects (in both size and dollar value) and workforce? Grow it, of course, by updating the firm and implementing fresh ideas.

“To give an idea of what things were like, our receptionist was still using a typewriter prior to us obtaining full ownership of the company,” Whyte explains. “I think the previous ownership group were hesitant in welcoming changes and adapting to the ever-changing construction world. The mentality was to stick to the basics, standard curtainwall, straightforward glazing projects, nothing out of the ordinary. But we have a different mentality. We’re not scared to try anything.”

Learning by doing
However, the road to success is seldom smooth and Whyte and Ward obviously had challenges to contend with. “I would have to say the biggest challenge in the early years of ownership would be not having any mentorship during the transition from employee to ownership roles,” says Whyte. “At that particular time, we had a lot of work on the books and in full swing but, looking back, I wouldn’t change a thing. It essentially forced the two of us to grow up quickly, getting thrown to the wolves the way we did. We learned a lot in a very short period of time.”

When they caught their breath, Ward and Whyte began investing significantly in company growth, from investing in enterprise resource planning software to purchasing new heavy equipment (they now have three boom lifts and a scissor lift, for example). They also expanded their fabrication facility by adding another bay and have also now acquired the building where their business is situated.

“We grew the business by putting back into it,” says Whyte. “Staffing in the early days was also a bit difficult in terms of recruiting qualified and trustworthy individuals. This type of glazier was hard to find. They are assets that other firms hold onto by treating them well. We have done the same. Over the years we have built a family-type mentality in the office and in the field that I am extremely proud of. This is an environment that I believe attracts qualified glaziers as it seems we do not have to actively pursue these individuals anymore. They want to work here based on the reputation we have created.”

Whyte enjoys coming to work and its important to him that everyone else at Griffin Glass does too. “We have a great comradery throughout the business, and we all have our own jobs we need to perform to ensure the company is profitable but we have fun doing it,” he says. “I also feel amazing that with my contribution to this company and my ownership role that I have earned, I can provide jobs for others, especially in these trying times.” 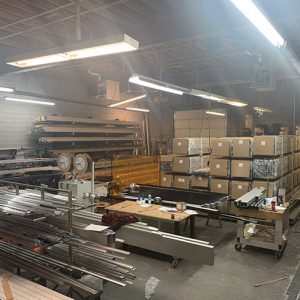 Inside the facility of Griffin Glass. 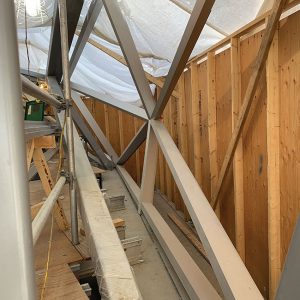 Griffin’s University Block 23 project will require them to glaze a complex connecting structure called “The Jewel.”

Project scope
As they grew in size and capability, Griffin Glass took on greater and greater challenges. Among the projects that they have successfully completed that Whyte describes as, “let’s say, very interesting,” is the glass canopy at the NE Shaw facility located in North Calgary. (It’s actually the first picture that appears when one visits the Griffin website.) This project consisted of a full-day 3D scan and 150 pieces of opaque laminated glazing, not one alike.

Whyte adds, “one project that has tested our skills to a level not seen before is on our University Block 23 project.” Known more broadly as Block 23 and Central Park in Calgary’s University District, the project is a combination of a large central park space (green space, four-season public use areas such as a skating rink, water fountain, a staging area for concerts, a picnic area complete with tables and barbecue pits), coupled with a retail development (Staples, Cineplex, daycare, restaurants) on an adjacent parcel to the north. Structurally, explains Whyte, the project “consists of two four-story buildings, a parkade that connects the two buildings and a ‘feature’ pedestrian access structure called the ‘Jewel’ [that features custom-fritted glass]. In all my years, I have never seen anything like this, a structure that lives up to its name.”

Another interesting Griffin project is the 4th Street Underpass in Calgary, part of an upgrade of several of the city’s downtown CP railway underpasses because they were dark, unpleasant and even considered unsafe, so used only out of necessity. The 4th Street Underpass is the main gateway and key corridor for pedestrians and vehicles moving between the Beltline and downtown core, and each day over 8,000 pedestrians pass through it. Along with re-vamping and updating the corridor structurally, the project also includes a large-scale electronic artwork project. As described by Skyrise Calgary: “Aside from offering a brighter, cleaner atmosphere, the artwork’s animated light and colour responds to the flow of people through the space, making it a dynamic piece.” Whyte explains that it required 200 laminated glass panels, every one a different size. “It’s the neatest thing,” he says, “and we as Griffin Glass are proud to be a part of this City of Calgary enhancement feature.” (Video is available on YouTube.)

Some of many other Griffin projects include the Calgary Stampede Agricultural Building, the University of Calgary downtown campus, the Canalta Centre in Medicine Hat and the Inglewood Bird Sanctuary and Nature Centre. Located just five kilometres east of downtown on the Bow River, the Sanctuary’s Nature Centre looks out on 36 hectares and includes an exhibit hall and meeting space. It is currently
being expanded due to increasing demand for outdoor education.

Pride and excitement
Right now, Whyte is “truly proud” of where the company is in terms of its present success and also “extremely excited” for the years to come. “We’ve shaped our firm in a way that we can compete on projects that range from simple storefront repairs to multi-million-dollar buildings,” he explains. “This not only gives us the advantage when the economy is prospering and construction is booming as we can choose the projects that best suit our company, but when construction is slow, we’re not governed by a small niche or subject to a certain defined range of projects that we can pursue. I don’t know what the future holds as the construction industry is a rollercoaster at the best of times, but our vision is to keep growing the business on all fronts.”

While he builds his business, Whyte maintains a strong focus on building the industry and the trade as well. He is president of the Provincial Glazing Association of Alberta, an umbrella association encompassing both the Glass and Architectural Metals Association (GAMA) and the Glass Trades Association (GTA). He’s past president of GAMA and a presiding officer for his local apprenticeship committee and and sits on the Provincial Apprenticeship Committee board. This keeps him plugged in to Alberta’s system for regulating the trades and developing training and labour policies. Just because he co-owns the business now doesn’t mean Whyte has forgotten his roots as an apprentice working his way up.

Whyte says he owes everything that he is, personally and financially, to his business and to the glazing trade. “I’ve met so many great people and made great friends, some I even consider family,” he says. “Most importantly, I’ve been able to provide for my two children and give them a life that in their eyes makes them proud of their father for creating.”