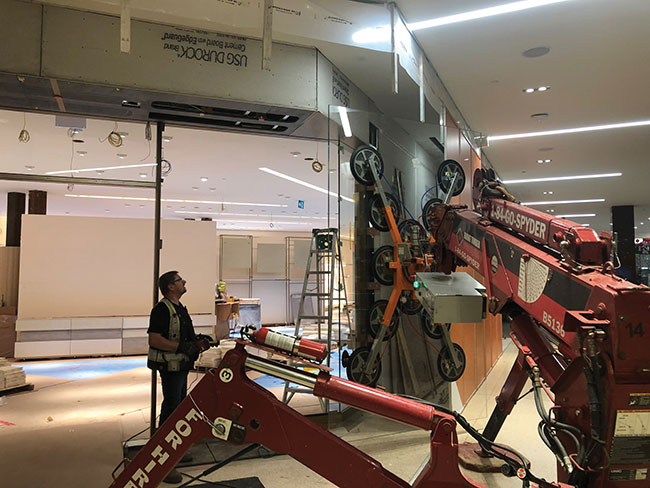 AT A GLANCE – West Edmonton Mall

As a consumer, navigating large shopping malls can be dizzying at times. One can only imagine how the team at Griffin Glass felt moving two 1,500-pound pieces of low iron, 10-millimeter heat strengthened laminated safety glass through the massive West Edmonton Mall to get it to its destination: a Louis Vuitton store.

Few companies specialize in these types of installations in Alberta, but the Calgary-based company enjoys a challenge. It has been servicing a variety of industries in the Calgary Metropolitan Area for 60 years, originally opening up shop in 1960. Griffin Glass offers a wide variety of glass and architectural metals for industrial, institutional and commercial construction projects. A few years ago, the company branched out to other regions of Alberta to offer these types of unique installations for shopping mall storefronts.

“We have a young office at Griffin. We’re highly motivated and nothing really scares us, we’ll try anything,” says Trevor Whyte, vice-president of Griffin Glass. “If it has to do with glass, we’ll make it work.”

The Louis Vuitton is on the second floor of the WEM, which presented a big challenge for getting the glass into the mall.

“The West Edmonton Mall was built in the ‘80s, so they have one place we could bring it in on the main floor,” Whyte explains, adding that he had meetings with the manager and engineer of the mall to plan out the best course of action. “We had to walk this thing halfway across the mall. It took us a good day just to figure out how it was going to work. Once you get those logistical things figured out, before you go down there [for the installation], it goes off without a hitch.”

During after the mall’s afterhours, the Griffin Glass team carefully wheeled the glass through the access point on the first floor then navigated it through a large portion of the mall and set it up to be hoisted onto the second floor with a Spydercrane sourced from Burnt Timber Lifting Solutions in Athabasca, Alta.

To ensure the installation went smoothly, Griffin Glass sent five employees to Edmonton for the project.

“I’d rather send one extra guy in case something goes wrong than pay for a broken piece,” Whyte says.

The glass was so large that Griffin Glass needed to source it out of another shop in Collingwood, Ont.

Another its successful installation, Whyte said an added bonus was admiring the finished project whenever he decides to go shopping at the WEM.

“It’s really cool to walk around the mall, once the store is opened, to walk around and take pictures,” he says. “You’re really proud of the project. You wish you could explain to them how it was done and how it came to fruition.”