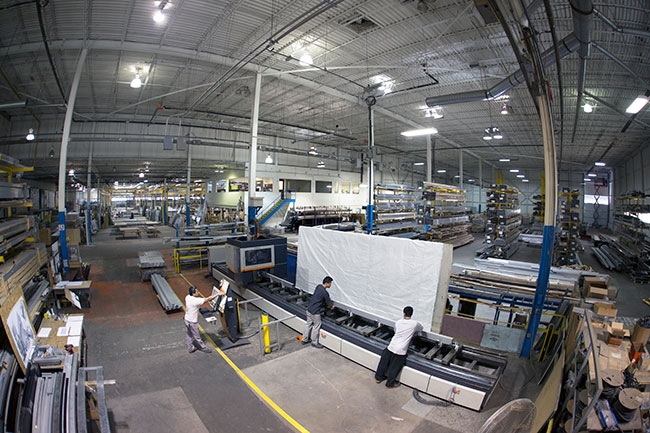 At the tender age of 12, Ted Redlarski ran his first business: a small shop repairing bikes. It was a first money-maker. Later, while still in college (age 19), he became one of the youngest company presidents in his native Poland to helm a construction company.

And, remarkably, he did it at a time when that country was under communist rule, discouraging attempts at private enterprise. Undeterred, he unleashed his entrepreneurial spirit.

It’s that same drive that has powered his vision to make Noram Glass, the company he founded in Canada almost three decades ago, to be among the leaders in Canadian architectural glass, aluminum curtainwall systems and structural glazing. He’s doing it one client at a time.

Word-of-mouth is a great marketing tool, says Redlarski, admitting he’s the company’s one-man sales team. “The glass industry in Canada is not a huge sector, so if you leave a good impression, word gets around. We get questions from clients about the projects we’ve done. The quality of work tends to speak for itself.”

That work speaks volumes in the newly opened, $15 million Vaughan Civic Centre Resource Library, sited on Toronto’s northern outskirts. Noram won the 2017 Ontario Glass and Metal Association award for the project’s unique and complex glazing design and execution. The curvilinear form of the building’s plan coupled with the vertical cant in two axes of the curtainwall system required significant design detailing and coordination, generating construction challenges which were, according to the OGMA, all successfully met. The judges deemed this building a dynamic and excellent example of the application of standard curtainwall technology to create a visually distinct façade.

It’s Noram’s signature achievement. “The Vaughan Civic Centre Resource Library is a shining example of one of the most challenging glazing jobs we’ve ever done,” Redlarski beams. “Certain elevations of the building proved the most tricky. Glass was used to build a wall of sweeping curves tilting sideways 15 degrees and leaning forwards from zero to 15 degrees, substantially twisting the infill glass and aluminum panels, creating an extraordinary illusion appearing to defy the laws of physics.” Complex tilted panels were installed to create an illusion of movement as the sun hits the Vaughan Civic Centre library from different angles through the day. The design was inspired by the curves of a nearby roller coaster at Canada’s Wonderland.

In order to craft such a sophisticated shape, the design had to be first produced in a complex 3D model. Notes Redlarski, “From this model, we extracted and refined the exact sizes and angles to achieve each infill panel and frame components’ unique and perfect fit.” Throughout the installation process, further intricate steps were taken to ensure its success. The installation of the anchor points required complex laser triangulation in order to place the anchors in their precise positions. Due to the twisted shape of the frame, multiple pieces of glass and panels were subject to substantial cold bending during installation. With the masterful relationships between glass and aluminum, and the visual relationship of pushing the boundaries of physics in architecture, the gradient frit pattern creates a seamless transition from vision glass to solid panel that adds more depth and artistry to the look of the library. “Our entire team was proud to be part of this great accomplishment,” Redlarski enthuses.

Winning the award was a crowning moment for Redlarski, who emigrated to Canada as a 25-year-old budding capitalist hankering to escape the economic and political shackles of communism. Articulate, intelligent, and today sporting a salt-and-pepper beard and close-cropped pate, he describes the rules of enterprise back in Poland in the 1970s as stifling, and non-compliance being downright dangerous. Despite the massive amount of red tape, and countless systemic challenges of living in a communist country, Redlarski thrived. His construction company, which grew to over 400 employees within a span of five years after its founding, specialized in flat roofs, industrial painting and specialty services (including underwater photography for inspection of submerged structures, industrial high altitude services such as renovations for oil refinery structures, steel bridges, radio antenna, and servicing industrial steel towers).

As his business grew ever more prosperous in communist Poland, a country where at the time the idea of private enterprise had no place, his father advised him to join the Communist Party and not to rock the collective boat. “Or things could get pretty rough for me, he warned me, but I wouldn’t have it,” Redlarski recalls. He, along with his wife Maggie, chose to leave Poland in 1987, seeking political refugee status in Turkey. They remained there for almost two years when they decided to “give it all up to come to Canada.” Arriving in Moncton, N.B., Redlarski immediately went to work in a quarry and later as a supervisor on a vegetable farm. Later, they moved to Waterloo, Ont., where he landed work as an electrician. But he was again bitten by the entrepreneurial bug. “Within four months, I jumped in starting my own business again,” he says. Noram Enterprises was born. “A necessity as my family was growing.” Today, the Redlarksi’s daughter, Jessica, 24, spearheads Noram’s quality assurance/quality control and marketing initiatives, also acting as the staff photographer. His son, Kevin, 22, has a keen interest in virtual technologies and animation.

After involvement in several house renovations, Redlarski decided to take Noram to the next level: erection of building envelopes in 1990 and manufacturing building envelopes in 1995. The company’s first fabrication facility (it was just 400 square feet) opened in Innisfil north of Toronto in 1997 and relocated a year later to a 2,300-square-foot plant in Toronto. “We’ve experienced steady growth ever since,” says Redlarski. “We moved to this facility in 2012, offering all the services and staff required to get the job done.” The modern 150,000-square-foot plant houses a workhorse AXYZ full CNC industrial router, two Ermak Speed Bend synchronized hydraulic press brakes equipped with 3D capability, a welding station, and a sophisticated glass components testing site that blasts panes for leakage and breakage with powerful hurricane-force fans.

Having everything managed under one roof allows the Noram team to control all aspects of its projects from start to finish, maintaining quality control and high levels of operational efficiency, in tandem with in-house capabilities that include professional project managers, fabricators, and installers. “To put it simply,” says Chad Hall, the company’s plant manager, “we believe that providing the complete package for glass and aluminum services is the only way to do business.”

As for Noram’s path moving forward, Redlarski believes innovation will drive its march. “To stay in the game, you must be on top of trends,” he insists. “Seek out innovations and embrace new technologies if you want to stay ahead of the curve.”

Next on Noram’s action plan: the mental health security sector. Redlarski has designed in-house a prototype sullsash (a specialty operable window installed on the interior of an existing window in order to protect that window from access of unauthorized people) with integrated blinds that open and close via an integrated non-ligature knob, and multi-point locks for custodial keyed entry. “We see a need in this market and are now testing a product: glass that’s high-security laminated, including optional ballistic glass. And we must ensure that our windows will meet the unique structural and safety requirements (high impact, forced entry resistance) to which a mental health security facility must comply,” explains Redlarski. “Whether it’s in designing a new facility, or upgrading a hospital to meet psychiatric security needs, we work with clients to ensure all performance, safety and esthetic requirements are met.”

Redlarksi likes to laud the talents of the Noram team. “I’m proud that our designers, fabricators and installers work together to create and build markets that don’t exist or are just in their infancy,” he says. “We see the benefit of jumping in early to capture the market in a more dynamic way.”