Central Canadian Glass has taken its own route to success 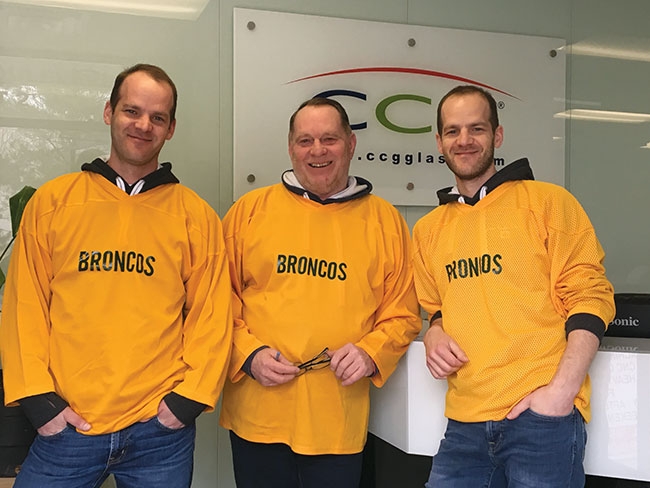 Back in 1988, Central Canadian Glass had just been started up in Concord, Ont., and Pat Trainor was an account rep at Guardian Glass North America with the Central Glass account.

“Then, about five years later, I was given the opportunity to buy the company,” Trainor explains. “I was looking for a challenge and a change and I liked the mindset that the customer is everything. Customers were viewed as an extension of the sales team and you go the extra mile for them as you are all on the same team. We still run the company that way. The faster and better you can supply your customers, the better they can serve their customers.”

At the start, Central was mostly a cut-size glass shop catering to the furniture trade. It was about 20 years ago that Trainor and his team started focusing on directly selling to tradespeople for designer-specified projects. The firm’s capabilities have grown to include in-house lamination, in-house tempering, custom painting, CNC and a variety of edgeworks. It has one of the largest open inventories in the country with seven or eight types of mirror, low-iron products and glass ranging from three to 19 millimeters, all to serve customers in sectors from storefronts to millwork, and mining to marine.

Competition is much fiercer now than it was a decade or two ago (which has led Trainor to be rather revolutionary in his business model thinking, but we’ll get into that later). Back when he started, there weren’t so many competitors, he says, simply because equipment was so costly.  “Twenty, 25 years ago, there were six or seven tempering lines in all of Canada, and now there are 60 in Toronto,” Trainor notes. “And the technology is so advanced now that it doesn’t require a lot of skill to run many machines. But of course, experience still matters. Most of our staff of 60 has been here 20 years and our average age is about 40 years old. We have a 67-year old and I hope he’s here until he’s 80. About three-quarters of my people can work anywhere in the plant. You can have the best equipment in the world, but unless you have good people, you won’t be successful. We don’t look hard for new accounts. We have accounts that are 20 or even 30 years old.”

At the same time, Trainor ensures training is ongoing so that staff keep up with new technology and processes, spending thousands of dollars on training programs every year. Central Glass also always usually has apprentices, but they are chosen carefully. “They need to be all about the customer and doing the right thing,” Trainor says. “Everyone who works here agrees that if there is some issue, it’s not about finger-pointing. We all believe there is nothing else but the customer. We have a lot of fun and we love challenges, but it’s all about the customer. We are from all around the world, and we are all united in that.”

And while the staff are perhaps on the “seasoned” side of the industry average, the age of the equipment at Central is anything but. “We invest every year in top-of-the-line equipment and nothing we have is more than four years-old,” Trainor explains. “Competitors mostly have equipment that’s 15 to 20 years old, and that’s not something that could fit with the level of service we provide. We sell to the biggest union shops in the country, and they don’t want to hear that your equipment is down. They will move on as they don’t have the time to wait; they are under contract and don’t want to be penalized. It is usually very hard to get business back once there has been an issue, so new equipment for me is a must. Our customers need consistency and reliability and that’s what we provide.” Indeed, Central Canadian Glass has just purchased a 40,000-square-foot  building in Vaughan, Ont., with all-new equipment.

Seven days a week
About two years ago, it became clear to Trainor that being open every day of the week would be a huge competitive advantage – a radical way to offer customer service levels that no one else could touch. “It wasn’t just about boosting volume of sales, it was a way to shorten turnaround times substantially and it’s paid off unbelievably,” he explains. “Some of our turnaround is two days compared to 14 days, and that’s unheard of. We are the only shop in the country operating every day of the week. We can look after service providers dealing with a customer emergency. We can do tempering in two or three days with the industry average being seven days. They really appreciate having it ready Monday morning.”

To make all this work, Central charges a premium rate, but Trainor notes that those who understand what he and his team offer are more than willing to pay it. He explains that Central is measured differently than most other suppliers; customers know that when Central says it will be ready Tuesday, it will be ready Tuesday at the same or better quality and faster than anywhere else. “Running around trying to get materials is expensive, and so is labour if you have to wait on materials,” Trainor observes. “And a contractor’s reputation matters. If I’m a contractor and I buy cheaper glass somewhere else but I have to wait, labour costs will be more than the cost of Central’s premium. And that contractor will pay in other ways if the cheaper shop doesn’t come through.”

Indeed, Trainor has no trouble telling a potential customer who doesn’t like Central’s prices that they don’t need to buy from his firm. And on the other side of the coin, he adds that with three decades in the industry under his belt, he knows who is who, his staff knows who is who, and Central now sells to the sons and daughters of fathers and mothers dealt with in the past. These long-term relationships are critical for Central, as is the speed it offers, the reliability that comes from investing heavily in new equipment and a team that makes sure customers’ needs are understand and addressed. And it’s clear that his team is valued by Trainor as much as his customers are valued.

“We have one of the best shops with a well-above-the-average employee compensation package,” Trainor says. “We have a lot of fun. We have a barbeque at the plant every month. And we pride ourselves that there has never been a layoff and we make sure that our folks get our minimum of 40 hours. My employees are there for me in the busy times and I need to be there for them in the slow.”

Trainor believes that glass, due to all its flexibility and its value for money, will continue to be a hotly desired construction material. And, although Trainor lists a future challenge to be maintaining service levels as Central continues to diversify its products, at this point in the story, you likely don’t have any doubt that the challenge will be met. The Central team also plans to grow its market relevance through providing project planning collaboration services, including prototypes/mockups.

When asked what he’s most excited about at this point in time, Trainor points immediately to the new building. “It really gives the business control of the market for decades to come,” he says. “It makes a statement to our customers that we are going to be here, and it makes the same statement to our employees and to future employees. It’s a commitment and it provides security to our customers and to us.” The new building is set to open the first week of January 2020.

The move will only take CCG about a 15-minute drive away from its present location, but ownership hopes the impact will be significant. Facility space will increase to 40,000 square feet from 27,000 now, while keeping the shop in the central hub of Toronto’s glass fabrication community. Partner Ryan Markoff likes the fact they will be starting from scratch with an empty building they can configure to their needs and the needs of customers. The new facility will include a new 108-by-144-inch CNC cutting table. Markoff says they need productivity upgrades like that just to stay abreast of demand.

“The growth we’ve experienced in the last two years is like nothing we’ve seen,” Markoff says. “We’re looking at upwards of 30 per cent both in sales and workforce.”

Markoff credits the strong results to strong chemistry in the ownership team. Sounds like a recipe for continued growth going forward.