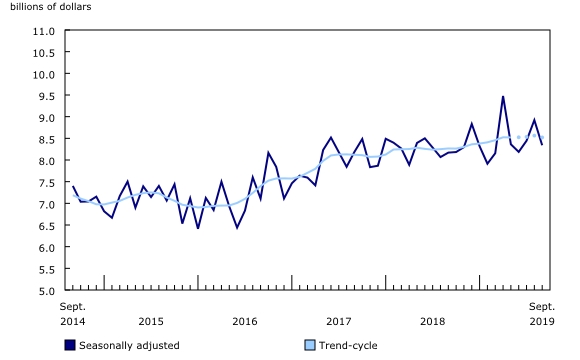 Nov. 8, 2019 – The total value of building permits issued by Canadian municipalities decreased 6.5% to $8.3 billion in September, largely due to declines in the residential sector. Gains were reported in four provinces, with the largest increase in Alberta (+7.2% to $1.0 billion). The largest decline was in Quebec (-20.5% to $1.5 billion), mostly due to a drop in the value of permits for multi-family dwellings.

Ontario reaches record quarterly high
Municipalities issued $25.7 billion of permits in the third quarter, down 1.2% from the previous quarter.

Despite mixed results across the country, Ontario was up 6.1% to a record quarterly value of $10.7 billion, largely due to the value of multi-family permits.

The total value of permits issued in the first three quarters of 2019 was 2.2% (or $1.7 billion) higher than the same period in 2018. Municipalities approved the construction of 176,582 new dwellings (+0.4%). This is consistent with the 0.2% increase in housing starts reported by the Canadian Mortgage and Housing Corporation for the same period.