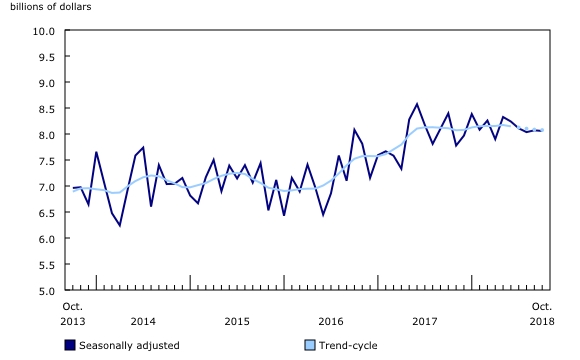 Dec. 10, 2018 – Canadian municipalities issued $8.1 billion worth of building permits in October, edging down 0.2% from September. The decrease was mainly attributable to lower construction intentions for industrial and institutional buildings.

In the industrial component, the value of building permits fell 29.9% to $439 million, the third consecutive monthly decrease. Declines were reported in nine provinces, with Manitoba the lone province to post an increase.

The value of institutional building permits was down 8.7% in October to $733 million, after posting an increase of 16.7% the previous month. Lower construction intentions for hospitals, post-secondary institutions, and other government buildings were responsible for much of the decrease.

In the commercial component, $1.7 billion worth of building permits were issued in October, up 2.2% from the previous month. The gain was mainly attributable to higher construction intentions for office and retail complexes.

In Quebec, the value of building permits was down 14.8% to $1.5 billion in October, following a record high in September. The decrease was largely the result of lower construction intentions for multi-family dwellings, primarily in the of Montréal, where the value of permits fell 39.3% to $314 million.

In contrast, the value of building permits in Ontario was up 9.4% in October to $3.3 billion. Increases in both the multi-family and commercial components contributed to the rise. The value of multi-family dwelling permits in the of Toronto rose 37.5% to $854 million—the second highest level on record. The gain was mainly the result of several high value permits issued for apartment-condominium buildings.