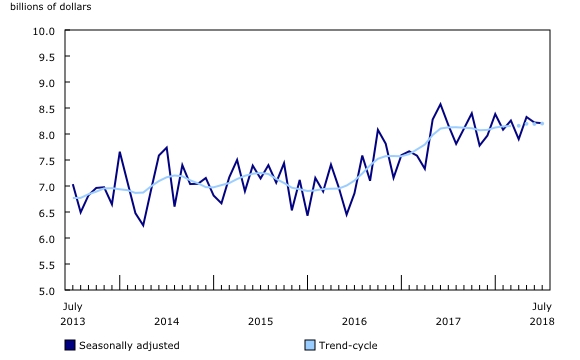 Sept. 6, 2018 – Canadian municipalities issued $8.2 billion worth of building permits in July, down 0.1% from June. The decrease was mainly attributable to lower construction intentions in British Columbia.

In the industrial component, the value of permits rose 16.0% to $726 million, a third consecutive monthly increase. The gain stemmed from higher construction intentions for transportation terminals and communication buildings, specifically a $100 million permit for Radio Canada in Quebec.

The value of commercial permits fell 5.0% to $1.6 billion in July, mainly on lower construction intentions for hotels, warehouses and office buildings. Values were down in four provinces, with the largest declines in Alberta and Quebec.

Within the institutional component, municipalities issued $600 million worth of building permits in July, down 2.0% from June. Of the three provinces that registered decreases in this component, Ontario reported the largest drop. Lower construction intentions for secondary schools mainly contributed to the decline.

Provinces and census metropolitan areas: British Columbia registers largest decrease
The total value of building permits was down in five provinces, with British Columbia and Ontario recording the largest decreases. At the same time, the value of building permits rose in 19 of 36 census metropolitan areas (), with Montréal and Ottawa reporting the largest gains.

In British Columbia, the value of building permits fell 11.0% to $1.4 billion. The decrease was mainly the result of lower construction intentions for multi-family dwellings in the  of Vancouver, following a record high in June.

In contrast, the value of permits in the  of Ottawa rose 53.9% to $416 million, the second highest value on record. Permits for residential construction rose 61.3% compared with June, coinciding with an increase in development charges slated for August 1, 2018.

In Quebec, the value of building permits increased 14.7% to $1.7 billion in July. The industrial component posted the second-highest value on record, driven by a $100 million permit for a communication building in the  of Montréal.