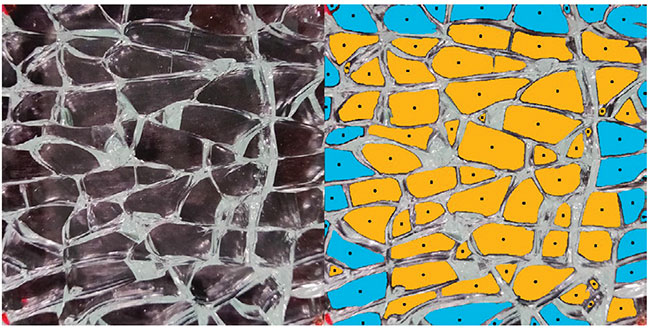 Tempered glass is produced by the heat treatment process where the glass pane is first heated beyond its transition temperature and then subsequently cooled rapidly to produce a temperature gradient through the thickness. The aim is to freeze the glass when the glass has the correct temperature gradient and then, when the temperature becomes uniform, the residual state is in a parabolic stress profile through the glass thickness. The destructive test and fragmentation due to breakage is the way to define the stress and safety level of tempered glass. Fragmentation shows several things about the stresses, including the stress level and the uniformity of the stresses. The standard EN 12150-1 has defined the punch test where 1,100 by 360-square-millimetre tempered glass is impacted with a pointed tool at the mid-point of the longest edge. From the breakage pattern, the number of the particles in the 50-by-50-square-millimetre area is counted from the minimum fragment count area. The standard defines the minimum number of fragments for different glass thicknesses for the safety of architectural glass. defined as the relationship between the number of fragments and the midplane tensile stress level for different glass thicknesses between 1.8 and 8.2 millimetres. The counting of fragments is essentially a visual task, where human operators use their brains very efficiently to separate individual shards from the broken glass. For a human, this task seems very easy and it is easy to forget how such a task requires very sophisticated and well-developed pattern recognition abilities, which is the very purpose our brains have developed for. The definition to count the number of fragments is simple and shown as an example in standard EN 12150-1. However, while the task may seem easy, it is very laborious and time-consuming. The counting process is also very repetitive and prone to human errors due to lack of concentration and fatigue. Due to that, it possible that counting results may and vary across examiners. Especially when the fragment number is high, the size of fragments is small, and by the human eye it might be difficult to define which are the smallest fragments to count and which fragments are inside the counting area.

In the traditional automated process, a photo of the fragmentation pattern is processed and analyzed with image analyzing tools. There is equipment for automated fragment counting based on image analysis, like CulletScanner from SoftSolution and FROG by Deltamax. Recently, machine learning has revolutionized the field of computer vision, as deep neural networks are able to learn very abstract representations of the underlying data. This gives new tools to analyze fragmentation patterns. However, deep neural networks need a good amount of well-annotated data. This is the time-consuming part to make a good model for particle counting.

In this paper, the focus is to present a novel way to count the fragments in the tempered glass by using the latest advances in the field of machine learning.

The initial fracture point and external support or force affect the fragmentation of the glass. These things have an influence on the stress distribution on the crack tips and, due to that, the fragmentation pattern changes. The initial fracture point is defined in the standard. The time after the breakage when the number of the fragments should be counted is set to three to five minutes in the EN 12150- 1 standard. This is important because, after the initial crack propagations, secondary cracks are forming. These secondary cracks are usually perpendicular to the initial crack edges and the number of those is also dependent on the initial stress state.

Fragmentation of thin and thick glasses are similar. However, for thicker glasses, the crack edges are rougher than for thinner glasses. Also, for thick glass, the fracture edge surface can be tilted. The rougher crack edge causes a wider crack line and the tilted crack surface can be seen as a white area due to the highly scattered reflection of the light from the crack surface. These both can affect the counting of fragments.

One approach to fragment count is to define the relationship between the residual stress level of the glass and the fragment count. This is important if the optical stress measurement equipment is used for a quality check of the tempered glasses.

Data annotation
Modern deep-learning neural networks rely heavily on the amount of data they can utilize during training. They adjust their internal representation of the problem by iterating over the dataset multiple times. With very sparse data, this leads to a possibly overfitted model that has only learned a very specific set of data. This kind of model is usually unable to generalize to the whole domain of the problem, making it unusable in a wider range of applications. This case is no different. However, in the case of glass fragment segmentation, the dataset is much simpler than, for example, general images gathered from the internet. In glass segmentation, only one class of objects is presented: the fragment itself. The neural network model has to learn how to distinguish between a fragment and non-fragment regions. An example of a widely used, more complex dataset is ImageNet, which contains over 15 million images belonging to roughly 22,000 different categories. The images are collected from the internet and annotated by humans. Modern neural networks have shown human-level performance even on very challenging datasets such as ImageNet.

Data annotation is very time consuming and expensive due to the need for human labour. The amount of data is usually a bottleneck in model performance, especially when applied to a specific task and no freely available datasets can be utilized. Glass fragmentation is an example of such a problem. For the model to learn how to segment the fragments, it must be shown numerous examples of correct, or ground truth, segmentations. 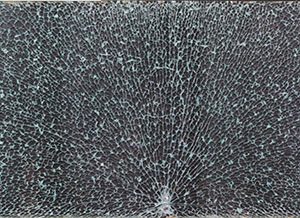 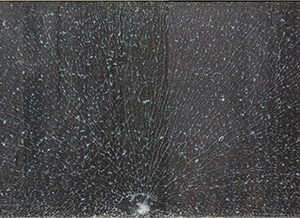 The subjective nature of fragment counting was experimentally investigated. The goal of the experiment was to investigate the variation in fragment counts across several human examiners. The test consisted of two test samples of thicknesses four millimetres and 10 millimetres. Two glass thicknesses were chosen because the fragmentation pattern is very different for thin and thick glass. Thickness has a significant effect on breakage pattern and visual appearance of fragments. In general, it is easier to count fragments from thinner glass. The test was organized as follows. Two standard-size (1,100 by 360-square millimetre) tempered glass lites with four-millimetre and 10-millimetre thicknesses were broken. Each individual counted the fragments from two separate 50-by-50-millimetre regions: one from the centre of glass and one freely chosen region of least fragments. The coordinates of the freely chosen regions were also reported to compare how each individual finds the least-cullets areas from the glass.

The results show that there is significant variation in fragment counts across human examiners, even when everyone counted fragments from the exact same region. Differences are even greater when the examiner freely chooses the area of least cullets.

For the four-millimetre glass, the count of the AI model was within one standard deviation of the average human count. For 10-millimetre glass, it was slightly further away. However, this does not mean that the AI model is wrong, since the task is highly subjective. The corresponding fragment count of the AI model for the four-millimetre and 10-millimetre samples were 98 and 68, respectively. There are many small fragments that the AI system counted as individual fragments and a human might not. This is especially true in the case of a 10-millimetre sample. In the 10 millimetres sample, the AI system included many small fragments in the final count, which is not wrong but results in a higher number than the average human examiner. One benefit of the automated system is that it is consistent in its decisions and the results do not vary due to tiredness, lack of concentration or other conditions affecting human examiners. •

This paper has been reprinted with permission from GPD Glass Performance Days.