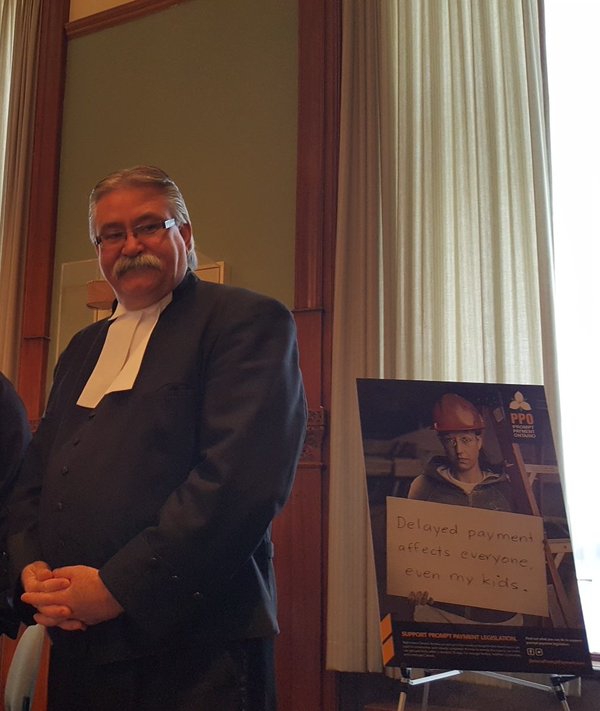 Prompt Payment Ontario, a construction industry group dedicated to reforming Ontario’s system for paying contractors, met with legislators in Queen’s Park all day May 11 to push for the quick release of the Reynolds Report, which contains the findings of the Construction Lien Act review and was submitted to the Ontario government in late April. The group hopes the swift release of the report will get prompt payment reforms onto the Ontario government’s agenda before provincial Parliament breaks for the summer. The Ontario Glass and Metal Association is a member of Prompt Payment Ontario.

Prompt Payment met with Members of Provincial Parliament from all three parties, including Speaker of the Legislative Assembly of Ontario, Dave Levac. The OGMA was represented at the meetings by Angelo Cairo of Stouffville Glass, association president. Monte McNaughton (PC, Lampton-Kent-Middlesex) has been spearheading the introduction of the reforms to the Legislature and plans to create a blue ribbon panel to tour the province and collect information with a view to driving legislation. Steven Del Duca, the Minister of Transportation and one of the founders of the original Bill 69 was also involved. There are 107 seats in the provincial legislature of which Prompt Payment was able to schedule and meet with 46 MPP’s. Del Duca joined Opposition Leader Patrick Brown, and NDP MPP for Algoma-Manitoulin Michael Mantha who expressed their support with new legislation.

“It was a great day with lots of positive feedback,” Cairo reports. “It was amazing to see the reaction on the MPPs’ faces when you tell them you may not get paid for work you have done. Some were quite upset and commented it was just wrong that we need a law in order to get paid.” Cairo pointed out to the legislators that Prompt Payment reforms would protect everyone down the food chain in construction contracting, from general contractors and subcontractors right down to workers and suppliers. He also highlighted the excessive lost time and money that delayed payments cause, including losses of tax dollars for publicly funded projects.

“There are 400,000 construction workers in Ontario and of this number a reported 16 per cent of salaried and hourly employees are delayed a pay cheque,” Cairo said. “Every one of the MPP’s that we met with had a story about themselves or a relative who worked in construction.”

“Some MPPs were led to believe that the reason why people weren’t paid is poor performance,” Cairo said. “They weren’t understanding that contractors use late payment as a leveraging tool to complete projects and fund other projects using their subcontractors’ money.”

Cairo said all MPPs involved in the day were strongly in favour of Prompt Payment Ontario’s position. “It was unanimous support,” Cairo said. “It was really great to see a unified voice in construction. I feel very rewarded to have represented the OGMA.”