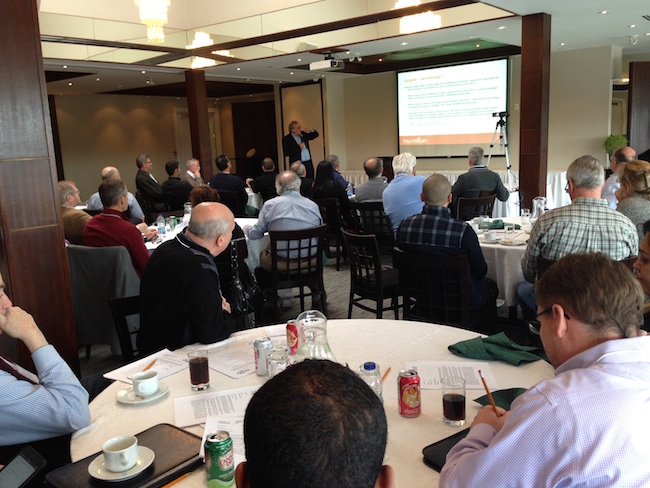 Jan. 28, 2016 – The passion in the room was palpable at times when Geza Banfai, a veteran construction lawyer with McMillan in Toronto, addressed a gathering of the Ontario Glass and Metal Association at Richmond Hill Golf Club to update members on the Ontario government’s review of the Construction Lien Act and the potential for prompt payment legislation in the province. The OGMA is a member of Prompt Payment Ontario, a construction industry lobby group seeking reform of the existing rules and new laws to help smooth the flow of payment through the contracting hierarchy. Banfai gave a background presentation from his vantage as one of the drafters of the original Construction Lien Act back in the early ‘80s, then answered questions and led a lively discussion of what the glazing industry needs to see in the future.

Banfai started out by discussing the results from a comprehensive survey Prompt Payment commissioned to inform their submission to the Construction Lien Act review. The survey revealed that Ontario glazing contractors waited around 60 days on average to be paid for completed work. Over a quarter had accounts payable on their books that were 90 days old or older. Many claimed their businesses had faced insolvency due to late payments, and most had been forced into bad situations such as missing payroll, delaying payments to suppliers, missing loan payments and delaying investment. Almost no one uses the Construction Lien Act, citing a number of difficulties with the most common being the 45-day time limit on filing a lien. Now that Ontario glaziers are used to waiting 60 days for payment, the 45-day deadline is usually past before they even consider the payment late. Filing a lien is seen as too cumbersome and likely to damage the relationship between the glazier and the general contractor.

Banfai took a look at possible remedies that glaziers can pursue and discussed their pros and cons. In the case of late payments while a project is still under way, downing tools and suspending work is considered the “nuclear option” that few contractors want to consider for fear of the damage to their reputation and the potential for lawsuits. Simply suing contractors for outstanding amounts is expensive and time-consuming. The Construction Lien Act has limitations and is not in any event a method for actually getting paid. Non-binding arbitration is something Banfai said is often effective and much less expensive than suing, but is something both parties must agree to. The problem, he noted, is often one of getting the payer’s attention. To that end, he recommends a legal device known as a Notice of Intent to Lien, which is simply a written message to the property owner outlining the work done, the existing contract, the amounts owed and noting that payment is overdue. These notices can be very effective as they go around the general contractor and can have the effect of halting the flow of payments down the chain. Often, the owner is entirely unaware of payment issues between the general contractor and the subcontractors, and a Notice serves to alert him to the problem. Owners do not want difficulties of this kind on their worksites, and they very much do not want liens on their property, so it is likely that the general will get a phone call shortly after such a notice is received. Presto, you have his attention.

Then Banfai took a look at what Prompt Payment Ontario hopes to achieve with its efforts. Banfai pointed out that Canada remains one of very few jurisdictions in the Western world that does not have some form of prompt payment legislation. He says they favour a holistic approach involving new prompt payment legislation, reform of the Construction Lien Act and the introduction of an adjudication process aimed at speeding up decisions and getting the money flowing in advance of any court decision. The way this is done in other jurisdictions is to have an arbitrator meet with the parties and make an interim decision about what should be paid. Later, a judge can make a final decision and overturn the arbitrator’s finding, but Banfai says this rarely happens. In fact, most cases that go to arbitration are withdrawn following the arbitrator’s decision and never reach court. This is a big win all around. Some features Banfai would like to see in future prompt payment legislation would include a requirement that contractors cannot hold back entire payments because tiny parts of the job remain unfinished or disputed. He would also like to see guidelines allowing glaziers to be able to quit work if not paid promptly. The overall effort is to push Ontario’s construction culture back to a 30-day payment standard. The review may also recommend contractors be required to create a fund to cover holdbacks so the money is ready to release when the work is done.

The review of the Construction Lien Act was supposed to be complete at the end of last year, but it has been extended.