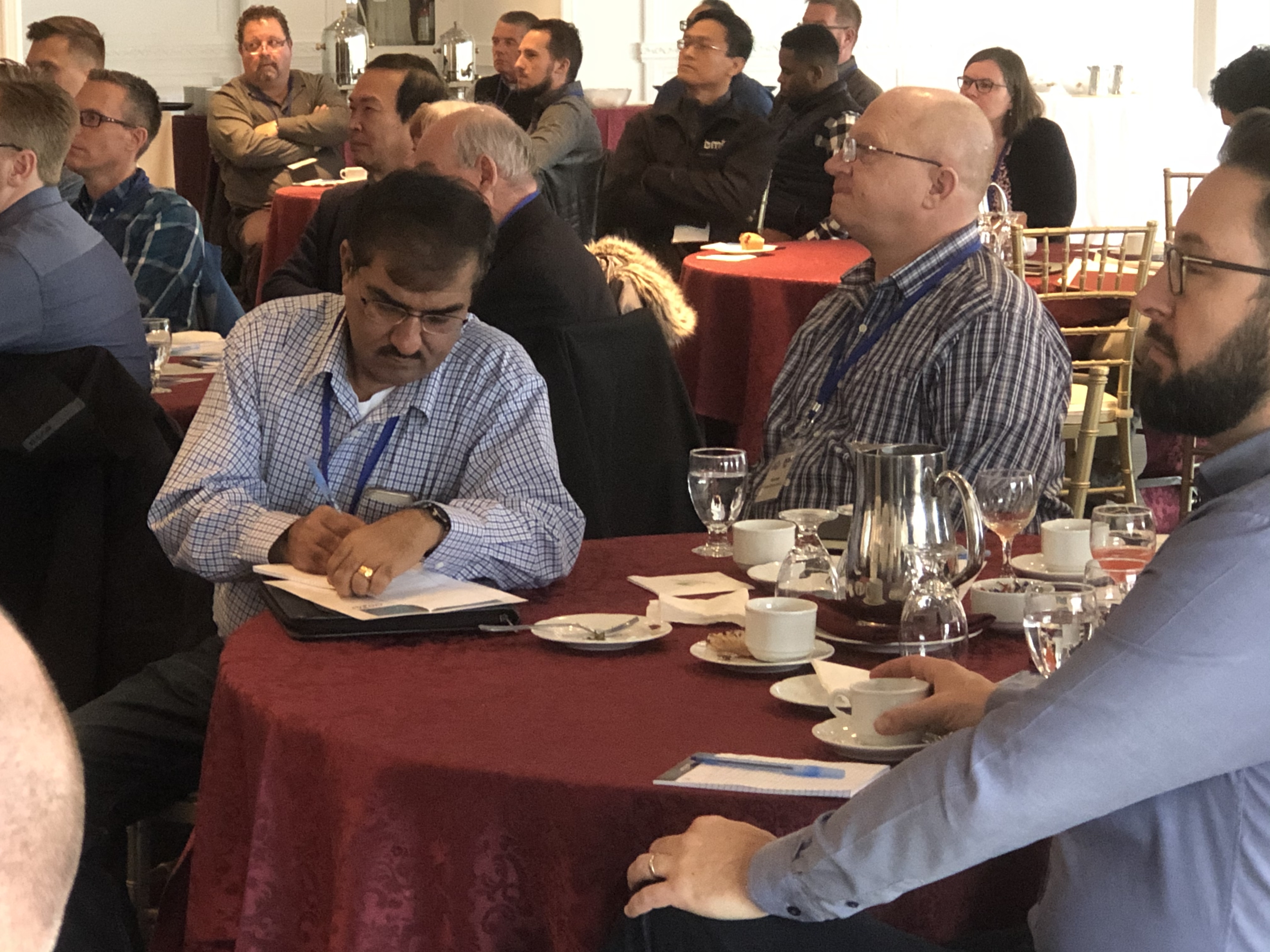 Ron Hull of Kuraray educated the group about sound reduction in glazing, noting there has been a surge in interest in this parameter in the last few years. Discussions outside the presentation backed this up – contractors are saying acoustic performance has become a big part of every bid. At least some of this is attributable to an expanded awareness of the negative effects of noisy environments on health, stress and concentration, which has caused acoustic requirements to be added to building environment standards like Well. Hull showed how acoustic performance is tested and noted there are differences between ASTM and ISO tests and that different labs can give different results. He noted that the mass of the glass (more is better), the airspace in the insulating cavity (larger is better) and the stiffness of the interlayer (softer is better) are the key components in determining a window’s acoustic performance. Also, assymetric glass thicknesses between lites improves the acoustic performance of IGs. Inert gas fill appears to have little effect, and wood and vinyl frames perform better than aluminum. Hull also noted that tighter design with better air/water leakage performance also perform better on acoustic reduction.

Glen Ackerley, a lawyer with WeirFoulds, updated attendees on the new Ontario Construction Act which came into effect Oct. 1. He went over the big changes: prompt payment requirements, the new dispute adjudication system and the modernization of the construction lien rules. Ontario now requires project owners to pay general contractors within 28 days of receiving an invoice. Subcontractors must be paid within seven days of the GC receiving payment, and pay their subcontractors within seven days of being paid. General contractors can still negotiate different payment schedules with their clients – ask before you bid. Ackerley also explained the new Ontario Dispute Adjudication for Construction Contracts body that authorizes adjudicators to resolve disputes over contract payment. Disputes are heard by a adjudicator who is not a judge but is certified by ODACC. The adjudicator is paid according to the value of the payment being resolved and costs are usually split between the two parties. Decisions are to be made within 30 days. The decisions can still be overturned in court later, but the objective is to get money flowing and construction sites operating as fast as possible. The experience in other countries has been that adjudicator decisions are rarely challenged and prevent almost all disputes from going to court. Finally, Ackerley addressed construction liens. The big change has been the deadline to file a construction lien extension to 60 days from 45.

Lisa Green of Guardian gave attendees an overview of several emerging technologies in glass, including surface #4 low-E, bird-friendly glass, photovoltaics, dynamic glass, anti-reflective treatments, electrostatic shades, embedded LED, smart mirrors and sensors. It’s clear that we are fortunate in the architectural glass industry to have so many exciting opportunities for innovation available.

Last, Ted Kesik, a building science professor from the University of Toronto, told attendees how to avoid building envelope failures. It’s a big topic but Kesik’s personality is easily big enough for the task. He boiled failures down to five main sources: bad design, bad operations maintenance, wrong purpose, bad construction and substandard materials. He referred to research that revealed three common ways these sources manifest themselves. The first is failure by contractors and installers to read specifications and system instructions. The second is transition between subtrades – failures happen in the spaces where trades overlap and coordination and communication are needed to get different building systems to work together. Finally, attempts to correct for mistakes and poor design after systems are installed is another major source of failures. Kesik also expressed his dislike of the term “value engineering,” saying “Value engineering does not add value and does not involve engineering.” He lamented the many examples of owners putting their projects at risk of failure by demanding cost-cutting changes to specifications after they are already written. Kesik also lauded the standard CSA S478 “Guideline on durability in buildings” as a reference for specifying better construction approaches.