Management of internal and external relationships drives a new owner. 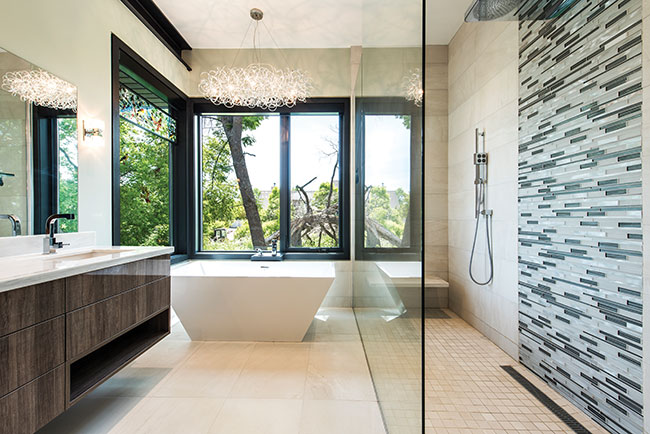 Mealey has noted that contractors in his Collingwood, Ont., market are taking on every larger and more complex glazing projects. He’s seeking the profitability sweet spot by moving Lawrence out of residential windows to focus on railings, shower glass and commercial storefront.

AT A GLANCE | Lawrence Glass & Mirror

Mealey is the new owner of Lawrence Glass and Mirror in Collingwood Ont., which was started by Gary and Margaret Lawrence in 1988. In planning to sell their business over the winter of 2018/2019 however, the Lawrence’s weren’t just looking for just anyone to take over. “They were friends of the former owner of The Flooring Place, which I had bought in mid-2017, and they asked him how it went,” Mealey explains. “They decided that I would be a good person to carry on what they had built.” Mealey’s wife Suzy, who works part-time at the business as a coordinator in addition to running her own firm, is very also well-known and well-liked in the community, and this continues to be an important factor in the success of Lawrence Glass.

Buying the business was a good fit for Mealey because he had previously owned a window and door supply firm. In addition, he’d built strong local ties through The Flooring Place, and having that business and a glass business under the same ownership would enable Mealey to sell the same contractors and designers shower glass, glass railings, specialty glazing and other glass and mirror products in addition to luxury flooring and tile. Mealey was also keen to buy the business as it already had an excellent reputation for quality work and attention to detail, with the Lawrences having created a lot of goodwill among contractors in the area.

For the existing staff, the ownership transition was also positive, in that some were perhaps worried that the business might have closed or that whoever took over would be inexperienced. With Mealey at the helm, a man who had accomplished things like growing The Flooring Place 150 per cent since acquisition in June 2017, they could relax. He certainly had business smarts, but it was Mealey’s experience with taking over other businesses that has had an impact on Lawrence Glass employees far greater than they likely would have imagined.

John Mealey has brought a wealth of experience acquiring and optimizing businesses to Lawrence Glass and Mirror.

First steps
Upon taking ownership, Mealey immediately began identifying the top 50 accounts and analyzing not just their profitability, but how they fit with his new Lawrence Glass team. “The driving force behind this analysis is based on the lack of capacity in the market and the desire to fill our available capacity with high-value customers that lead to higher profitability,” he explains. “In the past in my other businesses, I had noticed that a lot of profit can be lost due to customers not being ready to receive deliveries, not being organized in other ways, not paying in a timely fashion, and so on.”

Mealey began the process by talking to staff and listening to feedback from customers. This led to holding ‘partnership meetings’ with customers and suppliers as well. It’s an approach that Mealey first used with clients at The Flooring Place in 2017 and 2018. During those interviews, he informed customers of the changes he was making at his new business to make it more efficient but he also discussed his expectations. In the Lawrence Glass partnership meetings, because it was already lean and efficient, he was mostly communicating his plans and expectations. Over about 50 interviews since last April, Mealey has asked customers to be ready for his team, to have the site prepared for delivery and to have any building code or engineering information or questions ready. “Timing is critical with glass, and it’s the last thing to go in before occupancy,” he says. “We don’t want to be pinpointed wrongfully as the business that has delayed occupancy.”

Mealey also interviews potential customers to ensure there is an alignment of values and that he and they have the capacity to meet each others’ expectations. He believes it’s equally important that suppliers have the same experience and he works to continually improve communications with them, holding the goal of becoming each suppliers’ best customer.

But Mealey had another reason to do all this, which was just as important: to increase staff morale. “It has a negative effect on any staff when they have to deal with troublesome customers,” he observes. “In my businesses, I want to create an environment where that’s not a factor for my employees. I want them to be respected and happy. I want them to know I have their backs.” When asked what his staff said when he explained what he was doing, Mealey says they were surprised – and excited about the future.

As for the response of interviewed customers, well, some of them had to be fired, but the vast majority of the entire supply chain were keen to jump on board. “We all have mutually-similar goals – we all want to be profitable, deal with good people and do a good job,” Mealey says. “The process of getting there is the challenge, but clearly identifying the responsibilities in each part of the process is a critical first step. Building is complicated and the homeowner is more involved and armed with more information than even before. I think the choice is simple – keep up or get out.”

As a result of his analysis, Mealey also decided to narrow his products and services to some extent. He believes it’s hard to gain a competitive edge when you’re not focused on what you do best. For example, he’s taken Lawrence Glass out of doing residential windows, for now anyway, as it wasn’t an area of expertise and was only about ten percent of business. Now, about 90 per cent of sales are flat glass for railings, shower glass and commercial storefronts. The other ten is IG replacement and mirrors.

This has all been positive, but the most rewarding experience Mealey has had so far at Lawrence Glass and Mirror was with a new client – sort of. “We had had a builder leave The Flooring Place in the fall of 2018,” he explains. “At that point, it was still in transition and neither of us had put our best foot forward. So, he went looking for other suppliers and I had felt badly about it. Recently this builder came back to us after having a very bad experience with competitors in both flooring and glass. He wanted to get back on track with us and start over. We recently completed our first job where both The Flooring Place and Lawrence Glass supplied and installed his order, and everyone was happy. It’s been one of my highlights since taking over.”

Challenges
Mealey believes small businesses are being challenged to continually increase efficiencies like never before. That’s why since he took over, he’s put Lawrence Glass through a “digital transformation,” with workstations and tablets now running glass-specific software (Smart-Builder). He notes that while it’s always challenging to learn new systems, using the software has enabled the team to go from generating three or four quotes per day to about 20. “At the same time,” he adds, “customers demand a personal approach. Every customer wants to feel like they matter the most, and we strive to show that.”

It was also a bit challenging for some employees to answer a lot of his questions about what could be improved and why, putting them a bit on the spot in terms of their accountability. Mealey says however that this challenge has “turned out to be a great process to really understand the business and how to set individual goals. Everyone has responded well. After acquiring multiple companies over the years, I try not to make the same mistakes twice and think this acquisition was the smoothest
so far.”

Mealey has also introduced a company-matched RRSP program for his employees, as well as an individualized goal-orientated bonus program. These, along with his positive attitude, have made a big difference in helping attract and retain good staff, he says. He believes the existing staff were ready for change and have welcomed the way he is uncompromising with expectations. All these changes since April have already resulted in a healthy 25 per cent bump in business over the same time last year.

But of course, Mealey is looking ahead.

“Our contractors seem to be taking on larger projects that are becoming more complex,” he says. “Stairs with detailed custom railings are becoming a focal point in people’s homes, and custom showers are getting more complex and trendy. Many builders are seeking supply partners that can fulfill on a larger scale, which is where we fit in. Builders also want to deal with fewer suppliers, and if you can supply more of the project and get it done faster, that’s better for everyone. Our tile installers, for example, are being trained to measure for glass, which saves a lot on the timeline.” To boost sales further, Mealey has introduced “a really fun product” in partnership with Imagic Glass that enables personal image application.

It’s clear that what makes Mealey most excited is creating a rewarding atmosphere for the people he works with, and it’s not something he will ever give up on. “My background is highly varied, with homebuilding experience, to World Cup-level alpine ski racing, to two decades in commercial finance,” he says. “For the last five years of my commercial finance career, I felt like a number and I never want to feel like that again, and I don’t want anyone else to feel like that either. This makes me excited and wanting to come to work every day.” •

1 Comment » for Inside and out – Lawrence Glass & Mirror, Collingwood, Ont.