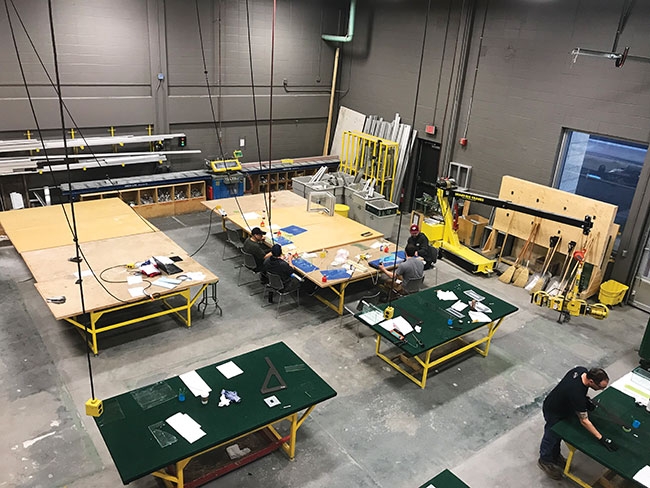 A well-equipped hands-on shop staffed by experienced journeypersons turns out qualified glaziers that employers rave about. And the program is seeing more interest from women.

It’s no secret that getting young people into any of the skilled trades can present a significant challenge. From disinterested students to parents pushing only university and guidance counsellors that don’t recommend the career path, the skilled trades have their share of roadblocks. The glazier industry is no exception.

That said, a passionate instructor can really help a program go far. Just ask Natasha Hillestad, who enrolled in the Southern Alberta Institute of Technology’s (SAIT) glazier program in 2007. She was one of the first women to graduate the program and received her journeyman ticket in 2010. Now at 32 years of age, she is the shop foreman at Griffin Glass and the current president of the Glass and Architectural Metals Association (GAMA) in Alberta.

“I kind of got into the trade by accident,” she recalls while laughing, adding that the instructors played a key role in fuelling her interest in the program. “They’re very inspiring and motivational and encourage growth, so I always found that very helpful as someone coming in not knowing anything, and the time taken to explain. The program, year by year, was very beneficial to me.”

Hillestad still works closely with the SAIT instructors on behalf of GAMA, and says that the instructors still show same passion now to students as they did when they taught her more than a decade ago.

“We do school trade shows together, I’ll go with the instructor, like Gene [Aqulini], and we go and we talk to the next generation and it always amazes me how the passion of the instructors doesn’t seem to fade. He’s as motivational talking to these high school students now as he was when I was there,” she says. “A lot of people’s love of the trade kind of fades away and it’s just a job, but the instructors at SAIT aren’t like that. They still love it. And they still have a lot of knowledge and experience and love hearing all the new stuff from the workers now as to what’s different in the trade so they can evaluate change for the next class.”

Hillestad says she could watch Aqulini interact with people at these shows all day. And not just the students, but the people who have presented some of the biggest roadblocks to recruiting young people into the skilled trades as well: the parents.

“Just watching him interact not only with the students but with their parents and talking about the benefits of our trade and where you can really go with that career choice, I could just stand there and watch him talk to them,” she says. “I go for the female perspective when they’re young ladies that are interested in it. And I can give them that perspective and how being a woman in this trade is kind of not easy, but it’s manoeuvrable. And you can do career and you can do family and how that all works together. But watching him talk to the students I can get distracted, because I remember sitting in that classroom with that same level of excitement. It’s a good program and a program that I would recommend for anybody.”

Having Hillestad come and speak with young women about the industry is having an impact. Gene Aqulini, glazier instructor for SAIT’s School of Construction, says that more women are enrolling in the program than ever before. He says there are 24 women that are currently in the program and recently graduated.

“I believe 13 of them are now journeywomen,” he says. “Ladies have been flocking to our trade the last 10 to 12 years. We attend a lot of trade fairs, a lot of school trade fairs, and we’re finding the girls are going, ‘Wow, look at what you’re making. And I can go to school and not pay anything.’”

In his experience, Aqulini finds that women have a tendency to pay a little more attention to detail and that the female graduates have gotten rave reviews to date.

“For the ladies that have come through our program who I’ve stayed in contact with, there are never anything but good things said about them,” he says.

For students that are considering signing up for SAIT’s glazier program, Hillestad recommends dabbling in both fabrication and installation.

“Don’t pigeonhole yourself to one thing. The more knowledge you have, the better,” she says. “I’m going to be going back for more SAIT courses, so I definitely recommend the school.”

Aqulini says that SAIT’s glazier program has achieved not only the highest recognition, but also the highest pass rate (92 per cent) in all of its governmental exams, and an 86-per-cent passing rate on Red Seal exams.

“It goes to show the experience of the instructors,” he says. “There is no other program in North America that can match that.”

A well-equipped hands-on shop staffed by experienced journeypersons turns out qualified glaziers that employers rave about. And the program is seeing more interest from women.

Changes ahead
Although the program at SAIT’s glazier program is going strong at the campus in Calgary, the school did recently announce some changes up north. SAIT dropped the glazier program in Edmonton, which was taken over by the Northern Alberta Institute of Technology. New registration for the NAIT program opened up this past May.

Whyte is also a SAIT graduate and earned his Red Seal back in 2003.

Griffin Glass currently has 16 installers and 10 of them are full journeyman ticketed, so they take education very seriously during their hiring procedures.

“It’s a bit top heavy but our end product shows our quality,” he says. “I’d rather pay a few bucks for more qualified people.”

As a local employer, Whyte says there’s no comparison when comparing a potential employee who has their ticket with a person who doesn’t.

“It’s self-explanatory,” he says. “If an apprentice put himself through school it shows a commitment to the industry. Especially in this market, which is so saturated with workers.”

Although the SAIT program is only based in Calgary now, the school is still a training partner for companies in Saskatchewan, Manitoba, the Northwest Territories and The Yukon.

“For the last four years, we’ve been drawing from Atlantic Canada as well, so we’ve had a few students come up from Halifax,” says Aqulini. “We have a super-strong program. We’re running about 328 students.”

Industry impact
Whyte says SAIT’s glazier program and the industry in general has had a huge impact on his life.

“I’ve been doing this 23 years and it’s gotten me to where I am right now. It’s made me my life. I owe everything to the glazing field,” he says. “My father owns a glazing company. It’s just been in our blood. It’s done wonders for me in particular, and a lot of my workers, even if they move on to other places.”

As a member of the PAC and LAC, Whyte works regularly with the instructors at SAIT to ensure the program stays up to date and offers the latest training to its students so they are ready to enter the workforce when they graduate.

“Essentially both LAC and the PAC work together to keep everything up to date,” he says, adding that the whole program was updated over a course of about five years, except the handouts, which are being updated now. “The whole course outline is up to date as of two years ago. It’s a great program, its strong. It’s got great instructors, a very professionally taught program.”

Aqulini has been a glazier for about 26 years and was certified for Red Seal in 1996. He is currently in his 12th year as an instructor at SAIT. He says the most fulfilling part of being an instructor is becoming somebody’s mentor.

“It’s no different than being in the field and taking on an apprentice,” he says. “Watching them fulfill their life and get their raises and the smiles on their faces when they struggle and then succeed. I can’t tell you the feeling it gives you. I think number one is seeing the success of the student and watching them come in with pimples and leave married, owning a house, maybe having a child. Then they come back years later and say, “This is what’s happened in my life, and thank you for all of this… its the best job in the world.”