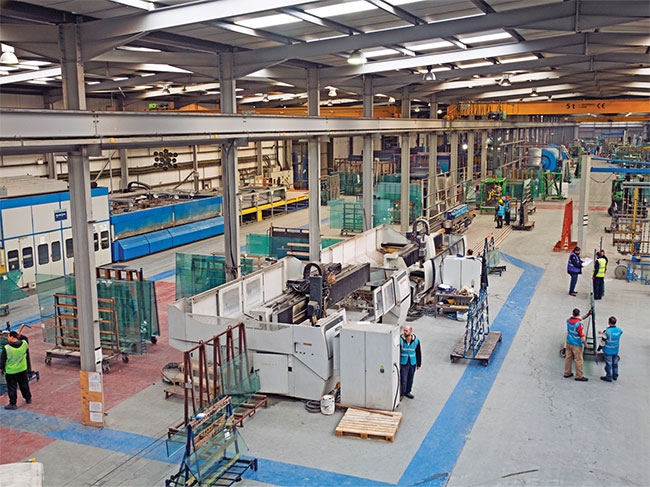 They’re big and they’re here. Carey Glass boasts an 850,000-square-foot plant in Ireland where it produces oversized IGU for shipping around the world. The company says it makes 98,000 square feet of fabricated glass products every year.

Founded in Ireland in 1965 by three brothers from the Carey family, Carey Glass, a major global glass processor, remains a family-owned and -run company. The business grew from fabricating furniture glass and mirrors to manufacturing insulating glass units and now claims to ship 98,000 square meters of glass products worldwide every week.

“With the advent and increase of tempering technology, the business went from strength to strength”, said Michael Carew, North American sales director for Carey Glass. “We currently have three locations. Our primary manufacturing site and headquarters is 850,000 square feet and is located in southwest Ireland in Nenagh, the second largest town in County Tipperary.”

Carey has another location in Northern Ireland, which is 100,000 square feet, and a third plant in Chester, U.K., which is 85,000 square feet. Both of these plants mainly cater to the residential market while the headquarters in Nenagh is configured for both commercial and residential projects.

Carew launched the company’s North American expansion initiative which he likens initially to an R&D project. “Our strongest market is still the U.K. We have our own fleet and are sending an average of 23 trucks per week to cities throughout the U.K. including London, Manchester and Birmingham. With Brexit negotiations ongoing, there has been great uncertainty in the U.K. market. We entered the North American market before the U.K. voted to leave the EU, and, to be honest, like many others, we were surprised with the outcome of that referendum. So our entry into the North American market place was not in any way influenced by Brexit.”

“Each year we have grown significantly the volume of projects we are supporting both in Canada and the U.S.,” says Carew. “Coming into North America, our signature strength was our oversize glass capabilities. I never thought we were going to be competitive in the quarter-inch-quarter-inch market or tower projects, but we soon discovered that when you get over a certain square footage of volume we become very competitive.”

“We obviously specialize in double- and tripled-glazed high-performance products. We temper, heat soak test, laminate, curve, print and digitally print. We can fabricate a 14-foot curved IG with a simple CAD file or a PDF showing the radius.”

All of Carey’s capabilities are under one massive roof within the Nenagh headquarters, which provides benefits to architects and glazing contractors. says With the exception of the production of coated glass, which the company procures outside, all project execution activities take place at headquarters. Unlike some of the other leading glass processors, Carey does not outsource the critical tempering and laminating processes to external suppliers. This allows it to retain total control of the attainment of the quality and delivery requirements of each project. “We’re doing such high volumes of glass that we obviously have big buying power,” Carew explains. “This coupled with our in-house processing capabilities makes us very competitive.”

Carew shares that the initial challenge in the North American market was getting the first jobs and growing their North American fan base. Importing glass has a huge fear factor. “Keep your two fingers crossed and let’s hope it all works out,” jokes Carew. “It was clear that most of the professionals we spoke with were interested in importing glass, primarily to explore opportunities to improve quality and of course profits. There was real interest in both our proposals and the quality of our product. However, we needed to give a level of comfort and confidence that there would be no disadvantage from a communication or service perspective when dealing with an overseas provider.”

One of Carey’s strategic operating priorities is to provide exceptional support to architects and glazing contractors during the design-assist and project delivery phases. Its customers say they greatly appreciate the work of Carey’s dedicated support team. For each project, there’s one dedicated point of contact, the project manager. Any questions or update requirements from a glazing contractor are dealt with in real-time by the dedicated project manager. Carey recognized early that it would not only need to match but exceed the levels of support the glazing contractors were accustomed to receiving from local suppliers. “There are so many glass processors in North America,” Carew says. “We knew we needed to provide world class service to further differentiate our offering.”

They’re big and they’re here. Carey Glass boasts an 850,000-square-foot plant in Ireland where it produces oversized IGU for shipping around the world. The company says it makes 98,000 square feet of fabricated glass products every year.

Carew admits it was a hard sell initially convincing organizations to change direction from only buying locally. Obviously, the bottom line is what most people are concerned about. “’Am I going to make money on this job? Am I getting a competitive edge? We were able to demonstrate in most cases that our solutions were very competitive even with the additional cost of transport.” So the initial barrier to overcome ultimately came back to trusting the service an overseas glass supplier would provide.

“Thankfully, we’ve done enough projects now that I can say to every potential new customer I meet, ‘Go on to the website, pick any North American job you want and I will give you the customer’s contact details,’” says Carew. “You can call them yourself and ask. I am very confident in providing any names to describe our customers’ experience of working with Carey Glass.”

Carey Glass has the interior and exterior of the Washington State Convention Center project which is the biggest public project in the history of Seattle. “It’s a tricky job. It’s not your standard two pieces of glass. The complexities of this project are simplified with us having all processes under the one roof.”

How does one get a commercial project’s worth of glass from Ireland to a jobsite in Vancouver? According to Carew, if the glass is oversized and is peeking out the top of the container, it has to go the Panama Canal route. “We have shipped IGs into Montreal and railed them across to Vancouver and down to Seattle, however we have to install capillary tubes because they’re going to go over the Rockies and we don’t want them popping.”

Carey Glass is only seeing a small ripple effect of the ongoing trade war which is mainly transportation-related. “The trade war congests the ports and adds to our lead time,” says Carew. “When containers leave our facility, we tell the customer it’s a three- to four-week lead time. Every time there is talk about tariffs, everyone in America starts stocking up and it causes congestion. That three to four weeks occasionally turns into five to six because the ship is out in the water and can’t even get into the port.”

“Guardian and Pilkington give us phenomenal support in Europe,” says Carew. “We find North American customers can be more demanding than European glaziers. They demand answers now. So, in turn, Carey Glass North America is equally demanding of our partners Guardian and Pilkington. But they give us answers straight away and it’s a great service they provide to us. This obviously enables us to provide very quick responses to our customer’s information requirements.”

“Toronto, Montreal and Ottawa are booming,” says Carew. “It’s a very exciting time. In fact I heard an interesting stat in recent weeks: there’s currently more cranes in the sky in Toronto than in any other North American city. There has been speculation that the U.S. is slowing down, which we obviously have to monitor closely. I had a meeting with a major U.S. glazing contractor earlier in the week and we had this same conversation about the slowdown. He says, ‘We’ve never been busier. We don’t have to quote work anymore.’ I guess talk of a U.S. slowdown is premature.