Communication and growth the main themes. 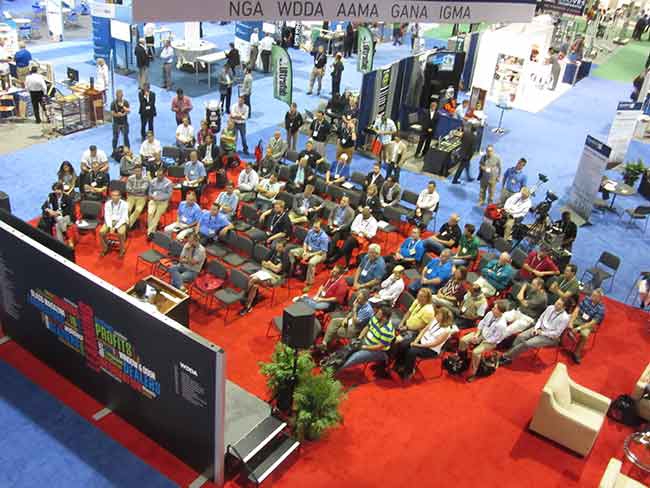 Business consultant Mike Tyson once said “Everyone has a plan until they get punched in the face.” So what do you do when you get punched in the face? You shake it off and come up with a new plan. Welcome to 2015 GlassBuild America held Sept. 16 to 18 in Atlanta which was full of more than 7,600 attendees and 420 exhibitors fine-tuning new plans.

Even with the world economy struggling, consensus by some of the industry’s top leaders was that the fundamentals are in place and the U.S. economy is expected to grow non-linearly through 2018, barring a geopolitical crisis. There is pressure along the entire supply chain from float companies to freight, fabricators and glazing contractors, however glass supply is expected to be remain available. Competition is fierce. Reports indicate that fabricators across the U.S. are busy with long lead times and quality issues, however machinery and equipment sales were higher than ever even though cash flow is in short supply with the industry ramping up capacity to create better margins and competitive advantages.

Communication was the reoccurring theme and the message to attendees was to set clear expectations and then communicate them early and often. Experts are calling it the Amazon Effect and it means communication is more important than ever, especially if for any reason what we promise is not accurate. According to Glazing Executives Forum speaker Jeff Dietrich, a senior analyst from ITR Economics, it’s not about next-day delivery, “it’s about next day delivery at 11:00. It is about communicating with people if for any reason what you promised is not accurate. It is critically important in the mindset of your clients and customers that what you promise, you deliver on time.”

At the Managing Lead Times in a Busy Market panel discussion, industry experts agreed that while construction is improving, the U.S. still hasn’t caught up to 2007. “We are getting busy again,” said Chris Cotton, general manager of Dlubak Specialty Glass. “It isn’t at the levels prior to the recession but our industry is busy. That’s a good thing. There is plenty of glass out there. The fabricators and whole supply line are gearing back up to those levels.”

“Things are much better but we’re still not where things were before the financial collapse,” shared John McGill, general manager of YKK AP America. “We’re a little skeptical that there isn’t quite that amount of growth but we are seeing some growth over the next few years. Everyone in this room went through the crisis and we all came out much smarter and stronger. It’s very important that we don’t forget those lessons. We are all more cautious and deliberate.”

“There is a lot of capacity and a lot of glass,” said Garret Henson, vice-president of sales and marketing for Viracon. “Are we going to run into a glass shortage? I don’t think so. Could we reach a ceiling? Sure, we could but I wouldn’t allow it to create any extra stress or anxiety for your supply chain capability. That being said, there are certain things that have changed. There has been 25-to-30-per cent reduction in float capacity in North America. It takes a long time for a float company to build a plant and, quite frankly, they aren’t sure that they should do that. There also has been a fairly heavy reduction in contract glaziers that look at certain types of jobs. There were 11 glazing contractors that left the market in 2012 and 2013 that were doing big buildings who aren’t doing them today. There is stress along the entire chain but there is still material out there.”

“There is plenty of standard clear glass available,” agreed Cotton. “Getting it to your factory in a day like you used to be able to do is not the same. It typically takes three of four days to get it to your plant, which is a completely different issue. Specialty products like textured, low iron and tinted glass that are run like clockwork every four or five months can create the illusion of a shortage.”

“Communicate early, communicate often” said Henson. “As you think through this process, you have to talk to your suppliers about your expectations that you have for your needs. If you can bring them in during your bid process, then your chances of success are much higher. If you go to your partner early enough and you help them understand what success looks like to you, then there is no reason why they can’t help you all the way through that chain.”

Henson emphasized to set clear expectations and reserve capacity. “Most of the suppliers in today’s environment are understanding of this demand and are willing to set aside capacity for you or participate in some level of commitment of a period of time. However once you do that, you have to communicate. To me, a good supplier is an asset. After your employees, they may be the most valuable people on your team at that point. If you have done your diligence and you have purchased reliability and found the right team to partner with, they should be able to take you through successfully.”

“Project managers are so important in today’s environment,” continued Henson. “We have a saying at Viracon: ‘Those that manage jobs really well are great customers to work with. Those that let the projects manage them, become very, very difficult to help.’”

According to Dietrich’s Prosperity in an Age of Decline presentation, the U.S. economy will grow through 2018. “This economy for you looks pretty good. Into the second quarter of next year, there is no indication of a recession short of an explosion that goes off somewhere around the world or a black swan crisis that no one knows about.”

“China, Japan, the European Union, Brazil, and South East Asia are going through either recession or slower growth. The U.S. is the only economy in the world that has been growing for the last four-and-a-half years. You can count China in there however their growth is slowing. They are declining faster than they have in the last 16 years. Which is significant but we don’t know how significant. China is an unknown to all of us even the experts.”

“For those of you in non-residential construction, you ought to know that you have a minimum of 12 months of advance warning to adjust. You are the only ones in the economy that gets that advance warning. And for some of your projects, it’s over 14 to 16 months that you ought to know what’s coming. Our next recession in our forecasting cycle is 2019. Which means for some of you, it’s 2020. That doesn’t mean linear forecast growth. It just means we are not going to go negative in this economy and we don’t see construction going negative.”