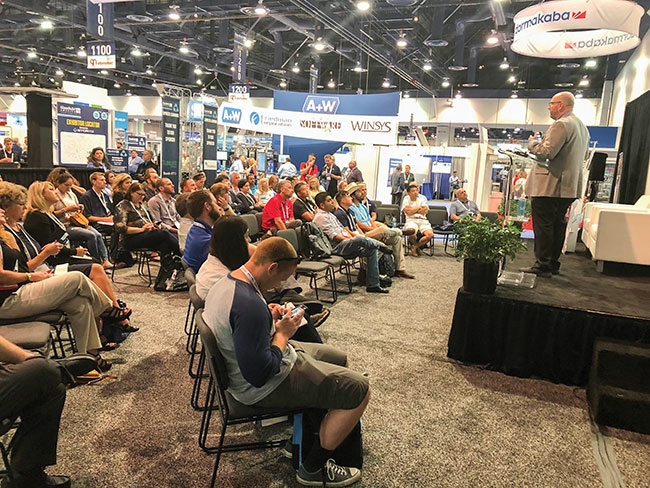 ABOVE: GlassBuild 2018 in Las Vegas featured an array of learning and discussion opportunities in addition to the usual huge show floor. The challenge was prioritizing just what to see among the many options.

Your company. Your industry. Your community. Now in its 16th year, GlassBuild America, the largest annual gathering of the glass, window and door industries in North America, returned to Vegas from Sept. 12 through 14.

Presented by the National Glass Association, now combined with the Glass Association of North America, along with association sponsors, WDDA, AAMA, and IGMA, this year’s GlassBuild was a massive success compared to 2017’s GBA in Atlanta, which was nearly a disaster due to Hurricane Irma.

2018 was a comprehensive event with the usual educational forums, free “Express Learning” sessions, abundant networking opportunities and a trade show floor full of the latest and most innovative glass machinery, equipment, products, technologies and services.

GANA’s Fall Conference was once again paired with GlassBuild America which was attended by the glass industry’s leading experts and included the first Fabricating Committee meeting of the newly combined NGA and GANA association.

“Tariffs. It’s a question that is coming in from quite a few people here,” said Perilstein. “Obviously, a major political issue right now. The initial focus of the tariffs has been on aluminum, however I think there are 20,000 glass-related products that are following in the latest round.”

“There is such a level of uncertainty,” said Allen Mathis, vice-president of operational excellence for YKK AP America. “It’s not just aluminum. It’s not just steel. Right when you wrap your head around one set of tariffs, legislation comes out with new tariffs. You are chasing the rabbit so to speak. Customers are concerned with what the cost impact will be on erecting a new building. Ultimately that rolls up to the end user: the building owner. It could have a negative impact on the construction market. That’s not something that would benefit anybody in the room.”

“This is impacting people’s buying decisions in real time,” agreed Garret Henson, vice-president of sales and marketing for Viracon. “Do I buy or do I not buy? There are a lot of offshore options out there in today’s environment and there is a reason they are here. This is the busiest market in the world. If you understand the fluctuation of currency and the strength of the U.S. dollar, you’ll know that is why those guys are here knocking on our door. But now the risk of tariffs is changing people’s buying behavior. I think that’s what is impacting some of the short term supply activity in the market right now. I can walk into someone’s office and they are looking at multiple choices and an offshore product might be one of them. They are trying to make the decision about what might happen right now, three months from now or in six months when it comes time to order the material.”

The economists from ITR Economics always do a great job of combining entertainment with economics. This year, Connor Lokar, the self-proclaimed Doogie Howser economist, did not disappoint and came out guns blazing. “Canada, our wonderful neighbour to the north. Their entire economy is matched by the state of Texas. And dwarfed by the state of California. You Texans certainly have more guns so I think we can take ‘em.”

Lokar told the audience that India is seen as the growth engine for the next 20 or 30 years that China has been for the last 20 or 30. “With 1.3 billion people in their economy, they are matched by the state of California,” said Lokar. “To put it into perspective, America is great. America’s economy is immense. We are the King of the Hill. We are the six hundred pound gorilla. We are on the top of the global economy and China is still a distant second. We feel that is a position that America is going to hold for at least the next few decades. There are headwinds that we are going to experience in the next 20 or 30 years but we are in a much better position to succeed in the future than in all of western Europe, Japan and in China.”

Lokar expects growth to continue for the rest of the year and for the headwinds to bite next year. “The preponderance of evidence says that the U.S. economy is going to start slowing down next year,” said Lokar.  “It’s not a disaster. Statistically, this will be the mildest period of decline in the last 100 years. This is very much a speed bump. A pause. I’m afraid to use the word recession because this is not the Great Recession. It’s a breather. A slight pullback. An opportunity to catch your breath where you’ve just been desperately trying to keep up for the last 18 to 24 months.”

According to Lokar, companies tied to the commercial side won’t feel the slowdown in 2019. “You’re going to start hearing those whispers of slowdown around this time next year as you start looking into 2020.”

Lokar told the audience that the ongoing tariffs could theoretically be expanded by up to seven times the current rates that the U.S. and China are currently facing, in which case it would be hugely inflationary for the U.S. consumer. Lokar said that in a consumer-dependent economy, it would be a threat to the business cycle growth and the acceleration of the U.S. economy. “Our thinking of 2019 has been on what we’ve seen to this point. Hopefully we run out of posturing and cooler heads prevail. If we go full bore on China and $200 billion on automobile tariffs, that could be detrimental to the 2019 forecast.”

With that caveat firmly inserted, ITR forecasts mild headwinds next year and then the next three years after look awesome. “Right now is awesome,” Lokar told the audience. “Longer term, not so much. It’s a problem when you cut taxes and you don’t also cut spending. We are approaching a one trillion dollar deficit this year with the strongest economy we’ve had in a decade.”

ITR feels that this is problematic from a long-term standpoint. “Our debt-to-GDP ratio is an astronomical 120.5 per cent,” said Lokar. “In the last near-decade of recovery and growth since the Great Recession we have done nothing to address this in the United States. In fact, it is on a trajectory to get worse over the next five to eight years. That is a long-term problem. That’s a not a 2023 problem. That’s not even a 2025 problem. We have a pessimistic look into the 2030’s. In fact, in 2030, we think that there is an economic depression coming. Not the R word. The D word. A disaster that will make the Great Recession look pleasant by comparison. At the core of that is debt and demographics. We are very good at kicking that can down the road. It would take an immense amount of leadership to tackle that and I just don’t think we’re going to get it until it’s too late.”

If there was one complaint about the 2018 GlassBuild is it might be argued that it was too big and too busy with too much information. It was a challenge to see the seminars, do the meetings, attend the receptions, network, watch the demos and fit everything in. It’s almost like an amusement park, you can’t do everything so you have to pick your attractions and manage your time. Bottom line is that you always walk away from GlassBuild America with knowledge and information to help you build a better business.