The jury is out on the benefits of twin skins. 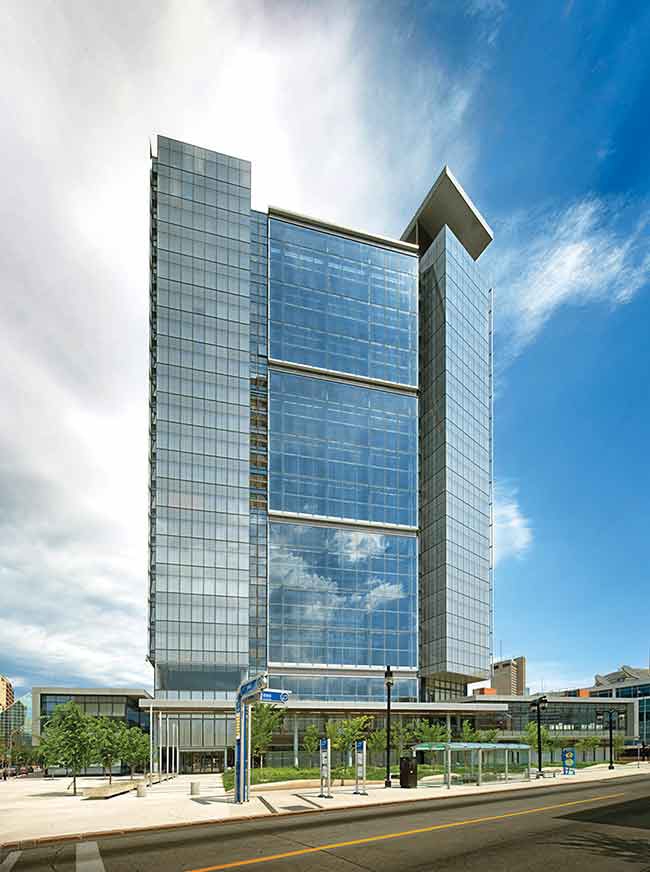 Double façades are attracting great interest the glass industry. It’s no wonder why: double the façade often means double the glazing. Apart from square feet, double façades, ventilated façades, double skins or environmental second skins offer a futuristic aesthetic that is appealing to architects, tenants and building owners. There is a common belief that second skins reduce cooling loads, allow for better ventilation, improve natural daylighting, increase acoustical control and reduce heating energy. In many cases they probably do, however it’s impossible to be certain just how effective the extra façade might be.

According to Terri Meyer Boake, a professor at the University of Waterloo’s School of Architecture, double façades are supposed to reduce your operating energy. But very few, if any, of the ones constructed to date publish anything. “The biggest promise of a double façade is that it is supposed to reduce your operating energy because you have this buffer system, so you should be taking in less heat in the summer or losing less is when it’s cold outside,” Boake says. “We don’t have any post-occupancy assessments of most of the double façade systems that are out there. They are designed on speculation or through simulation, however no one has ever shown that [the energy-saving claims] are true. They are probably reducing the amount of operating energy that they are using, however I don’t know if it is as much as projected. There is some positive data being collected at the Manitoba Hydro building, but it takes some time to get the systems tuned properly.”

What is a double façade? Mic Patterson, vice-president of Strategic Development for Enclos, breaks it down for us. “A double-skin façade is a façade system designed with a discrete inboard and outboard membrane encapsulating a cavity that can range from inches to many feet in depth,” he explains. “A double-glazed insulated glass unit is not a double-skin system, but is often used in one of the membranes, most frequently the inboard skin. The cavity provides a thermal barrier at minimum, and may be integrated into a building’s ventilation system. It also provides a protected area ideal for the housing of shading systems, effecting a solar block before the heat enters the indoor environment. More elaborate double-skin systems with very large cavities can incorporate circulation space, and even public space, within the cavity, as has been done with the recently completed Shanghai Tower designed by Gensler.

“Optimally, double-skin systems are developed as an integral part of a building’s HVAC strategy, and have the potential to improve both comfort and energy performance,” says Patterson. “The design of an effective double-skin system is complex, challenging, and requires a specialized expertise to implement. They are also very effective as an acoustical strategy in reducing sound transfer through the façade. This is more easily accomplished, and the system can be designed as a relatively simple thermal barrier with little or no integration with the building energy management system, although there have been problems with such systems overheating during certain environmental conditions. Double-skin systems are also used as part of a branding strategy — sometimes a form of greenwashing — to highlight a firm’s environmental sensitivity.”

Patterson tells us that double-skin façade technology is far more widespread in Europe than in North America, and the applications more sophisticated and successful. “Much of the development of the technology has come out of Europe. This is driven by the significantly higher energy prices and correspondingly more demanding building code requirements characteristic of northern Europe. There is a greater willingness to invest in building comfort and performance. Our energy prices in North America remain low and our building codes lax, and this acts as a barrier to a more widespread application of double-skin façade technology and a resulting benefit to the sustainability of the built environment. Many architects and developers have looked at the technology and found it to be ineffective on a cost-benefit basis, but this is only in the context of cheap energy. As the demands on building energy performance escalate, as they inevitably must, double-skin façade technology will become an effective tool for the façade designer.”

“In 2001, there were hardly any double skin façades,” says Boake. “At that time, they were being used in new, really high end projects with really big budgets. The bottom line, even back then, was if you put two skins on a building, it’s going to cost more money.”

“After the early 2000’s, the next big topic that came in terms of environmental concerns was embodied energy. We want low-carbon buildings. So if we are putting two façades on a building, we probably have twice as much embodied energy. Even though that’s not the highest concern right now. About 80 per cent of the carbon we deal with in buildings is operating energy and 20 per cent is embodied energy. So people are more worried about operating energy than embodied but you still have to be concerned with all of that expenditure. Aluminum is said to be one of the materials with the highest embodied energy, however it is very durable so there is a balance that has to be made. It’s about the appropriate use of materials. As long as you are using those materials in a long-lasting way, you can probably justify using them.”

For example, Boake says that double façades on taller buildings have an ability to allow for very responsive façade shading. “The biggest issue in a skyscraper is heat gain. In the summer, if you can cut down on your air conditioning by cutting down on the sun coming into the building, there is a remarkable improvement in terms of your mechanical load. One of the problems with shading devices on the outboard is not only their expense but they get snow, wind and ice loads. If you are dealing with a double façade, you can have much more finely tuned shading systems within the cavity and that’s a big benefit, particularly in a cold climate like Canada. It’s less of a concern in Europe and countries that use exterior shading. In Berlin, they have operable shading devices that look like venetian blinds on the outside of the building and they don’t have a problem with them. But I don’t think you are going to be doing that in Montreal or Toronto. If someone tried to operate the louvres after an ice storm, they would damage the whole system.

“Another big benefit right now that I am seeing is re-skinning existing tall buildings,” Boake goes on. “You have a 1960s or ‘70s clunker where there is nothing wrong with the structure. You don’t need to tear the building down. But it needs a facelift. I’ve seen a lot of nice examples of projects where they are stripping off the old energy-inefficient façade and putting a double skin on it as an environmental and aesthetic improvement. You can take the old cladding off and put a new skin on or partially leave the old exterior and put a new skin on the outside to improve it and you don’t have to break the bank to do it. That’s exactly what they did with Telus House in Vancouver. It was an old brick building with double-hung wood-framed windows. They kept all of that and put the new skin on. You can also get some natural ventilation if you have some offset openings in the two skins – natural ventilation which is hard to do otherwise in tall buildings.”

It comes down to the money. “A lot of corporate clients in North America just don’t want to pay the extra money on a more expensive façade,” says Boake. “I’m seeing a lot of them in hot, arid climate countries such as the Middle East because of the clear advantages of shading.”

“One of the biggest challenges is finding someone that can engineer, install and maintain them,” Boake says. “They are specialized. Terrence Donnelly Centre was all stick built, expensive and took forever. The pre-manufactured systems by Gartner and Permasteelisa are much thinner. They just pull them up the building and seal them up.”

In John F. Straube and Randy van Straaten’s 2001 University of Waterloo research paper “The Technical Merit of Double Façades for Office Buildings in Cool Humid Climates,” the authors state that claims of the superior thermal resistance of double façade systems are generally only true when the comparison is made to a standard double-glazed curtainwall. “The thermal bridges caused by floor penetrations and outer pane glazing supports used in most double façades makes even this claim dubious. The claim that double façades are energy-efficient is somewhat difficult to substantiate. The sound transmission of sealed triple-glazed glazing units with asymmetrical airspaces is almost always superior to a double façade, since there is no direct air connection of the exterior air cavity to the outside air. Daylighting and double façade are also not tightly connected issues. Double façades have pros (they can allow lots of light in when it is dull and overcast) and cons (they allow too much light and glare in most of the time, and too much heat out during all winter nights).”

In the 2007 New Jersey School of Architecture research paper “Innovative Building Skins: Double Glass Wall Ventilated Façade,” author Allen Barkkume states that a general conclusion about the performance of the double ventilated façade system cannot be made as all façades should be considered in the context of the individual building. “So many variations exist, and the success is so inextricably dependent on integrated design and collaborative work efforts.”

Barkkume writes “The issue that has the most potential for negative effect is the complexity of the system. There are so many components that must be integrated in a well-engineered whole, that most teams, especially the inexperienced, are not advanced enough to realize the full potential. Other negative issues include reduced floor space due to the cavity between façades. Fire safety can pose a threat if there is no partition between floors in the cavity. Also, firefighters have to break through two layers of glass to enter the building. Construction weight is increased. People sitting next to the window may be warm in the summer when hot air is flowing through the cavity. When windows are open, noise pollution may proliferate through the cavity making its way from one room to another or from floor to floor.”

“The most worthy opponent of the ventilated double glass wall façade system at this time, however, is humidity,” writes Barkkume. “In climates where a high number of cooling degree days are caused by humidity, any natural ventilation brings with it moisture that puts a heavy demand on the cooling system. Desiccant dehumidifiers, which draw moisture from the air, may become an added integrated component to this system.”

Double skins can be thought of as a form of dynamic glazing. They are great systems for areas that are hot and dry with high energy costs, strict building codes and/or substantial rebates to save energy. That is not Canada. It rains or snows most of the year. Double façades allow people to have a view and protect shading devices for the months that are warm, however unless you are re-skinning an existing structure and wanting to really freshen it up, the payback on new construction isn’t there yet and won’t be unless there is a sharp, sustained increase in energy prices. Public and private Canadian corporations will certainly continue to build larger and more advanced double façades, however they will be the exception to the rule for the foreseeable future. Their rarity, and complexity, will form a barrier to entry for most glaziers, further reinforcing a niche market for specialized contractors.