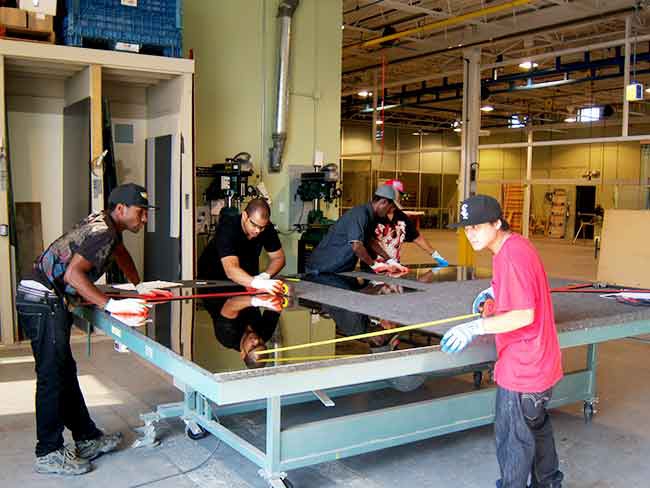 The OFISC features a well-equipped facility that can accommodate about 20 students at a time. School leaders say they are ready for any increase in enrollment that would result from trade certification being made mandatory.

The tension between regulated and unregulated trades in Ontario and across the country is ratcheting up, and changes are being made in Ontario that may well affect what happens in other provinces.

Right now, depending on the jurisdiction, it might be illegal for a glazier or other tradespeople to work on a construction site without being a journeyperson or apprentice. That’s the case in Quebec. In Ontario and Alberta, the contractor has a choice between using certified or uncertified tradespeople. In the Maritimes provinces, there isn’t any trade certification of glaziers, so if certified ones were hired, they would not be from the region.

Ontario is presently making moves to change its regime. Glazier became a recognized trade in the province in 1970 and received Red Seal status in 1986. The Ontario government turned over regulation of trades to the Ontario College of Trades (OCOT) when it was created a few years ago as an independent industry-based organization. With the OCOT, trades in Ontario are self-regulating, which is similar to what occurs with other professional colleges such as those for doctors, nurses and chiropractors. Many glaziers, apprentices and contractors (primarily unionized) would like to see increased regulation by making the trade compulsory.

A trade is “compulsory” if only licensed journeypersons and apprentices are legally able to do the work of that trade. It is easy to list the benefits of having anyone working as a glazier to be certified to a certain level of knowledge, understanding and skills, but there are some who believe OCOT should not be expanding the number of compulsory trades. The thinking is that the market should decide what level of expertise and quality is employed in building construction, with company owners responsible for their employees’ competence – and that there are already building codes and government-paid inspectors in place to ensure work is done right.

Before we look further at glazier as a compulsory trade, let’s take a closer look at the OCOT. The College is currently undergoing a review, called the “Dean Review,” which has found compulsory certification and a few other issues to be sore spots – issues that are causing controversy and tension. In their submission to Dean Review author Tony Dean, the Labourers’ International Union of North America states that the OCOT’s system relating to setting compulsory trades is flawed in several ways. For example, it doesn’t address the notion that compulsory certification hinders employers because it makes hiring more difficult. The union also states that the OCOT has a vested interest in making more trades compulsory because doing so means that OCOT must expand; this is not the setup that exists with other professional regulatory bodies in the province.

Mike Carter, chair of the Ontario Glazier Apprenticeship and Training Committee (OGATC), doesn’t buy in. To the argument that making more trades compulsory hinders employer and workplace flexibility, he says “It is simply mandatory certification. There is nothing in the OCOT regulation that dictates wage levels, nor does it increase unionization. And there is no proof from anywhere across Canada that compulsory certification itself has driven excessive compensation or restricted availability of tradespeople. Name me a project in Ontario that hasn’t gone through because of a lack of journeypersons in compulsory trades.”

Wages, Carter notes, are based primarily on two things – unemployment rates and the rate of inflation. “When there is employment available, people move to that area, and there can be significant relocation of tradespeople across Canada,” he explains. “There is always movement towards achieving a good balance between availability of work and those qualified and available to do the work. This was demonstrated in Alberta during the recent oil boom – everyone who moved there was employed and because there was such a demand for workers, wages were higher than elsewhere in Canada.”

As to the argument that making more trades compulsory means that the OCOT will expand, Carter declares it another a non-issue. “All chiropractors or nurses or doctors must be members of their colleges, so everyone is ‘compulsory,’” he notes. ”The OCOT is a non-profit organization and it will size itself to properly regulate and administer trades in this province, compulsory and not compulsory.”

Carter believes part of the fight against making more trades compulsory is simply resentment towards the very existence of the OCOT. “Detractors said when OCOT was created that the membership fee was a ‘tax,’ but before the College existed, all taxpayers of the province were paying for trade regulation through the Ontario government,” he explains. “Why should all taxpayers pay for administration of the trades? They should not. Trades administration should be funded by the trades community.” He adds, “And the government was ineffective at administration of the trades. There was a lack of accountability, and the last time it made a trade compulsory was about 30 years ago.”

To the claim that compulsory trades are not necessary because it’s company owners who should be accountable (if they hire someone who is incompetent and something goes wrong at installation or down the line), Carter is again firm. “The OCOT has an overarching mandate to protect the public interest, and while the OCOT doesn’t actually make any trade compulsory (that occurs via recommendation by a panel of independent adjudicators), it does enforce enhanced regulation if a trade becomes compulsory. This last argument is about economic interest. A common theme is that many companies petition against compulsory certification to protect their economic interests above all else and above other stakeholder interests (like health and safety of the public). They may be able to skimp here and there by hiring uncertified people but it may create an unacceptable risk.”

Steve Laird, a glazing health and safety instructor at the Ontario Industrial and Finishing Skills Centre in Toronto, also sees OCOT as having tremendous value. “It’s an entity separate from government and each trade board is made up entirely of members of industry. With OCOT, there’s a voice for dealing with the federal and provincial governments. Having all working glaziers certified and in the OCOT means you can go to the government with issues and be heard.”

Whether or not to make glazing a compulsory trade in Ontario is currently waiting for the Dean Review to end, and following that, if there is enough support in favour, the evaluation process will begin. Laird hopes that to be the case. “Glazing is complicated enough that it should be a compulsory trade,” he says. “I have been promoting this for 15 years. When you’re doing something where people could die, you should be certified to do the work.”

Laird adds, “I think there are enough union and non-union contractors who want it. In the end, the market also wants this because it’s a matter of public safety and avoiding shoddiness. There are the codes, but building inspectors don’t inspect glass after it’s in, so it’s critical that installations be done right in the first place by people who are certified to know what they’re doing. Correct installations ensure safety and also prevent so many problems down the line. Glass falling off buildings in Toronto is a huge safety concern and a frightening reality.”

Sprinkler installation recently became a compulsory trade in Ontario. This stemmed from some incidents in the Toronto area a few years ago involving fires in retirement homes where the sprinkler systems didn’t work and dozens of people died. Laird notes that Ontario fire chiefs wanted the trade made compulsory and so did plumbers (additional to the installers themselves). Wages were brought up as an issue during the process, he points out, but agrees with Carter that it’s a red herring. “Wages are not a factor in these jobs,” Laird says. “Ninety per cent of the cost of sprinkler installation is materials.”

The OFISC features a well-equipped facility that can accommodate about 20 students at a time. School leaders say they are ready for any increase in enrollment that would result from trade certification being made mandatory.

A look around the OIFSC
To become a certified glazier journeyperson requires training on the job and formal training at OIFSC. Apprentices must complete three eight-week sessions (totally 720 hours of an 8,000-hour apprenticeship) that occur at 2,000, 4,000 and 6,000 hours.

OIFSC formed about 15 years ago when the province dropped its apprenticeship training program for glaziers. OIFSC is primarily funded by the Ministry of Training, Colleges and Universities, and also via apprenticeship tuition and by unionized employers and employees. “It is an exceptionally well-equipped facility, and highly structured curriculum to meet the standards to become a fully competent glazier journeyperson,” Carter says. OIFSC’s classrooms and workshop are equipped with everything apprentices need to learn how to complete entire glazing jobs from receiving the specs to design to complete fabrication and installation.

OIFSC trains about 130 union and non-union students per year (six to seven classes of 20 students each), but there is no cap on the number of students it can take. There are two glazing instructors (one full time and one part-time), one industrial paint instructor, a director and an office manager. OIFSC also has two satellite campuses, one in Nepean, Ont., near Ottawa where glazier training is offered, and one in Ancaster, Ont., for industrial painters.

The scope of practice of the trade in Ontario (and what is taught at OIFSC) is the following:

If glazing does become compulsory, Laird says enrollment at OIFSC may go up a little, but notes that those who have extensive industry experience can become OCOT-certified by doing three things. They must gather paperwork from present and previous employers/clients outlining scope of work, write the OCOT exam (a small fee) and become OCOT members. “It will be a little bit tough for some to get the paperwork together, but in the end, it’s best for every individual and our industry,” Laird says. “We all need to be on the same page to make sure jobs are done right and people stay safe.”

Carter is hopeful that glazing will become a compulsory trade. “It’s what the public wants, what a significant part of the industry wants and what young people want,” he says. “It benefits them because it gives them mobility across Canada and the U.S. and a level of technical understanding and skill that makes them very employable. They can provide the best solution for the project involved.” He adds, “Irrespective of the outcome, it’s important for all stakeholders to participate in the OCOT because it’s our regulatory body. It will continue to evolve and we need everyone’s participation in that.”