FENBC
Zana Gordon’s retirement has been postponed until April as she assists the FenBC board of directors  with its transition plan. Major announcements will be coming from the association soon. Most other activities are on hold while we work on this. Some dates to keep in mind: FenBC golf returns May 12 at the Northview Golf and Country Club in Surrey. RSVP by May 9. Also, start looking forward to our Industry Conference in October. Details TBD.

AVFQ
The Association de vitrerie et fenestration du Quebec (AVFQ) takes the representation and defense of its members to heart.

For several years, multiple associations, including the AVFQ, have been grouped together in the coalition for prompt payments for construction contracts. Moreover, one of the principals who pays its contractors and other clients with very long delays is the Quebec government. A pilot project was held during 2021 to test a pre-defined schedule and payment terms. A light is coming from the end of the tunnel! The coalition has been heard in a parliamentary committee and it is possible that the whole thing will lead to a law shortly.

Under the theme “The future is now,” the AVFQ’s annual conference will feature more than a dozen workshops and conferences. The pandemic has forced us to move the annual conference originally scheduled for February. It is also time to book on April 21 and 22 at the magnificent Chateau Frontenac in Quebec. The program and registration are available at avfq.ca. The Prix Lumieres Gala will be back to reward the most beautiful projects in the industry. It will also be an opportunity to launch the AVFQ’s 60th anniversary celebrations.

The Regie du batiment du Quebec (RBQ) is the organization responsible for implementing provincial building regulations and codes. It has adopted the new Quebec building code in recent weeks. As a result, reference is made to the CSA A440.4:19 standard which has also been recently updated. The AVFQ, which is a provider of training for window installers across Canada in French and in English, has modified this training to take into account the changes made to the standard.

The AVFQ is organizing a trade mission to Germany in French from July 9 to July 17. During this trade mission, participants will visit plants in Germany and attend the world-leading trade show for window, doors and facades, Fensterbau Frontale. Remember that Fensterbau Frontale had to be moved from March to July because of the pandemic. Forty manufacturers will be part of the Quebec delegation.

The AVFQ is the industry’s leading association for its 200 members!

AGMCA
Hundreds of our journeypersons and apprentices across Ontario and Canada will recognize the name Steve Laird. Steve was our lead glazing instructor at the Finishing Trades Institute on Toro Road in Toronto for the past 17 years. In order to achieve your certificate of qualification to become a journeyperson glazier, you needed to spend a lot of time with Steve learning the craft.  Noel Marsella ( L) and Joe Buck of the AGMCA presented Steve with his industry achievement award. 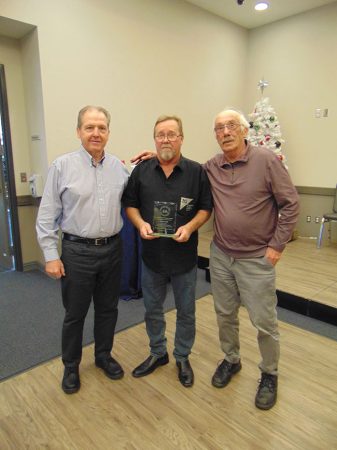 Noel Marsella ( L) and Joe Buck of the AGMCA presented Steve with his industry achievement award.

Steve retired at the end of December, after a 17-year run at FTI. While there, Steve helped us develop the current curriculum. He developed the zero-to-eight-ton crane course and provided the training on the spider crane and swing stage. He was certified in the AGMT program. Steve was asked to join the CSA group that developed a certification program for low-rise residential buildings. He chaired the Architectural Glass and Metal Trade Board Committee for two terms under the Ontario College of Trades, as well the Red Seal Occupational Standard Committee. Steve represented Ontario in the review of our certificate of qualification exam program and worked closely with the Ministry of Colleges and Training.

Steve started in the trade in Sault Ste Marie in 1979 before moving to Toronto and in 1985 joined Emery Glass, until it closed in 1993. He was hired by C.J. Rush Rovico and worked on many high-profile jobs, including the OPP headquarters in Orillia, Ont., and the Metro Toronto Convention Centre. Steve went on to work with Guildwood Glass and then Millennium Glass, before eventually recognizing his passion to train young apprentices in the craft he had mastered.

The member glazing contractors represented by the AGMCA are indebted to Steve for his dedicated service to our industry.

OGMA
Andrew Dolphin’s term as president of the OGMA concluded at the end of 2021 and on behalf of the entire board of directors we would like to thank Andrew for his direction and leadership over the past number of years.

Jeffrey Makimoto has been voted in as president for the next two-year term.  Steve Ringler with Alumicor takes on the vice-president role.

Until Omicron raised its ugly head at the end of 2021, things were looking good for our spring golf tournament scheduled for Thursday, June 2, at the Pipers Heath Golf Club.  We’re keeping our fingers crossed that we’ll be able to hold this event so mark your calendar now and think positively. •