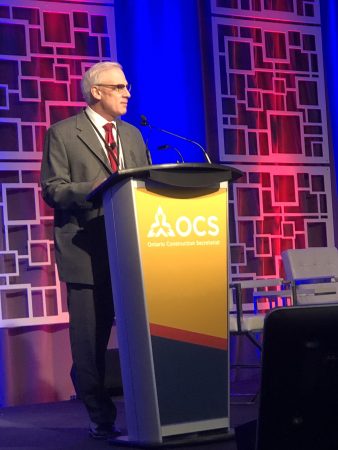 The Ontario Construction Secretariat held its annual State of the Industry conference on March 3 at the International Centre in Mississauga, Ont. This one-day event features some great economic analysis and the results of the OCS contractor survey, as well as a panel discussion with some leading lights. They always seem to get great lunch speakers, too, and this year was no exception with Steve Paikan, host of TVO’s The Agenda, delivering the talk.

OCS CEO Robert Bronk opened the day by commenting on how nice it was to be back in person and hoping attendees had weatherd the challenges of COVID without undue stress. He thanked the workers who kept going even at the most dangerous stages of the pandemic. Bronk introduced the Ironworkers apprentice class in attendance and thanked LiUNA for sponsoring the lunch.

Stuart Berman of Export Development Canada delivered an economic review and forecast. He started by reviewing the economic impacts of the pandemic and pointing especially to the unprecedented levels of pent up demand it created. Retail consumption is up 23 percent above pre-pandemic levels while household debt ratios are down, even in an environment of rock-bottom interest rates. Households have record levels of cash on hand and are only now showing signs of drawing it down.

Even with all that, global trade still experienced a crash in 2021 from its initial spike in 2020 and we all know why that was – supply chain issues. Berman pointed to some key causes. One was what he called “low trust” relationships along the supply chain. Companies at each link in the chain only have relationships with one or very few suppliers who can provide them key goods and services, making it difficult or impossible for them to pivot to other sources when their normal provider fails. Just-in-time manufacturing, the industry buzzword of the late ’90s, proved to be a liability when shipments didn’t move smoothly. And consumer behaviour changed not so much in the amount spent but in what was bought. Vacations became new decks. Commutes to work became home computer upgrades. Clothes became kids toys. Supply chains could not react to such a sudden shift in demand. Berman talked about the issues with overseas shipping but felt the problems were not structural and should resolve over time. Inflation, he felt, will resolve itself through the normal mechanisms of rising interest rates and suppression of demand. Berman summed up his message by saying this is the time for companies to invest in capabilities and capacity. Interest rates will likely rise in the short term, but demand remains strong and supply chain restrictions will slowly ease. Companies that gain the capability to quickly respond, especially with labour resources, stand to benefit.

Katherine Jacobs, OCS director of research, shared highlights from the organization’s annual survey of contractor attitudes. She noted that COVID was actually “not such a big deal” for the construction sector. Most indicators are up and unemployment is low. For the first time since OCS began the survey, new construction edged out maintenance as a source of work. Fifty-two percent of contractors expected higher revenues in 2022, with 82 percent reporting an overall positive outlook. Labour and supply availability topped the list of concerns.