Window manufacturers and architects are capitalizing on the insulating properties of aerogel. 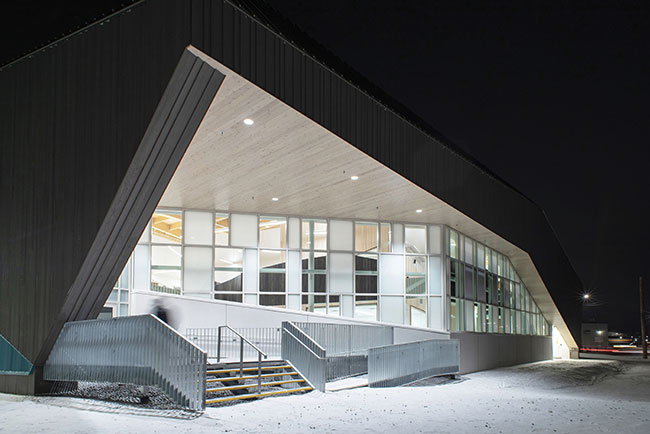 The mix of vision glass and aerogel-filled glazing is clear to see in this exterior view of the Nunatta Campus facility in Iqaluit, Nunavut. Courtesy: Julie Jira

Natural light floods the interior of the new Nunavut Arctic College expansion at the Nunatta campus in Iqaluit, the capital city of Nunavut. To help keep out the Arctic cold, which can dip as low as nearly minus 50 degree Celsius, some of the windows contain a remarkable material called aerogel.

Advanced Glazings, based in Sydney, N.S., manufactured 152 aerogel-filled windows, totaling 1,570 square feet and rated at R18, for the 3,000-square-metre building, which the Nunatta campus occupied in November 2018.

The architect of record for the Nunatta Campus expansion, Toronto-based Teeple Architects, achieved a 27.8 percent glazing-to-mass ratio, with 9.8 percent of the envelope made up of Solera units and triple-glazed vision glass comprising 18.2 percent of the building envelope. “A mix of Solera and triple-glazing units allowed us to provide a higher-than-average R value than would typically be achieved via the recommended double-glazed units,” says Stephen Teeple. “Aerogel creates interesting interior and exterior patterns of light,” he adds.

Having used Solera before, Teeple was familiar with aerogel’s insulating and light-transmitting properties. “In situations where natural light is really important, like in Nunavut, the lack of light can be hard on people. Aerogel Solera is absolutely optimal for maximising lighting and getting optimal building performance,” he says.

What is aerogel?
Sometimes referred to as frozen smoke, because that is what a block of it looks like, aerogel is said to be the lightest solid ever made. While its weight varies according to the manufacturing process and the material used (typically silica), Guinness World Records lists a graphene aerogel as the world’s least dense solid, at 0.16 milligrams per cubic centimetre, or 160 grams per cubic metre. 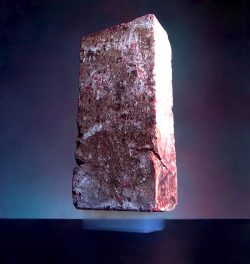 Aerogel is strong: A 2.5-kilogram brick is supported by a two-gram block of aerogel. Courtesy NASA/JPL-Caltech

Aerogel is 99.8 percent air, yet it is structurally quite strong. NASA has a photo of a 2.5-kilogram brick sitting on a two-gram piece of aerogel. Press on it a bit, and nothing happens. Press very firmly and it will shatter like glass.

Aerogel – made from gel but not a gel itself– was invented by the American scientist and chemical engineer Samuel Stephens Kistler. He announced it in a 1931 paper published in Nature called “Coherent Expanded Aerogels and Jellies.”

It has been used in various ways; for example, as thickening agents in cosmetics and in spacecraft to trap space dust. But its real claim to fame is its excellent insulating properties. NASA has used it to insulate space suits and the Mars Rover. More pedestrian products include cycling gloves and thermal sports bottles.

But for its high cost and opacity (researchers are working to solve this problem) perhaps it would long ago have become the insulating material of choice in windows. That said, some building designers are specifying aerogel-filled windows or panels where vision glass is unnecessary, or using a mix of translucent and vision glazing units.

Creating inspired systems
Advanced Glazings added aerogel to its product line about nine years ago. It offers its Solera and SoleraWall lines of insulated glass daylighting units in various thicknesses, with R values ranging from 2.2 to 25, or U-values ranging from 0.47 to 0.04. 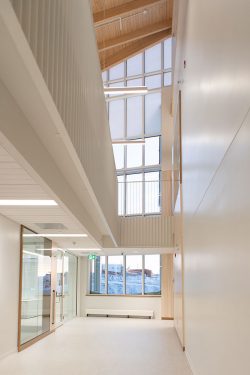 Light floods the interior of the Nunatta Campus facility, a huge plus during the low-light months in Canada’s Arctic. High-insulating aerogel-filled glazing reduces the penalty of a higher
glass-to-wall ratio. Courtesy: Julie Jira

Advanced Glazings developed a solution that keeps the granular aerogel that they use (aerogel sheets are more expensive) from settling. “The granular aerogels cannot simply be put in between the panes. We make a honeycomb material and use it for light redirection and thermal control in the thick, insulated units. We put the aerogel in the honeycomb, which keeps it stable for the life of the glazing,” Satterwhite says.

“The exterior face sheet is 0.07 inches thick and the interior pane is 0.045 inches thick, bonded to a structural grid core. We are part way between a wall and a panel. In each of the spaces – cells – within the grid core we place granular aerogel,” says Sam Keller, the creative director for Kalwall.

The goal with these panels is to transmit perfectly diffused light that mimics the transmission of the sun. While its aerogel-containing systems are translucent, the aerogel blocks none of the visible wavelengths of the electromagnetic spectrum, according to Keller. “You are seeing the true colour fidelity.”

“It is a niche product for us. We’ve done over 1,000 applications. The only real barrier to entry is the price point,” Keller says, adding that systems with their aerogel option cost two to three times more than their conventional systems.

“Aerogel granules are vastly less expensive than monolithic, optically clear block or sheets of the material, which to my knowledge, no one produces at a commercial scale, even to this day,” Keller explains.

Kalwall has been selling systems containing aerogel since about 2003. Keller’s grandfather and founder of the company brought aerogel into Kalwall. The company lays claim to having invented the translucent structural sandwich panel.

“Aerogel was his ideal material for a light-transmitting, super-insulating, lightweight material to integrate into his translucent panel design. He developed his own patented aerogel formulations, but those have never been manufactured at a large scale. Kalwall partnered with Cabot Industries to offer the first commercially available fenestration system using aerogel. The brand name is Lumira,” Keller says.

Speaking to the translucency of Kalwall panels, which can be placed to great effect and little disadvantage view-wise, Keller points out that while vision glazing is great at letting in light, it is not good at much else. “Glass is especially ill-suited to skylights, particular large top-lighting applications, because they allow too much heat gain and not enough thermal insulation, plus glare and areas of high contrast,” he says.

The Yale Sculpture Building in New Haven, Conn., to cite one example, uses Kalwall panels. They have a U-factor (or value) of just 0.05, compared to 0.5 for panels with a simple air gap, or 0.23 to 0.1 for panels filled with glass fibre insulation. 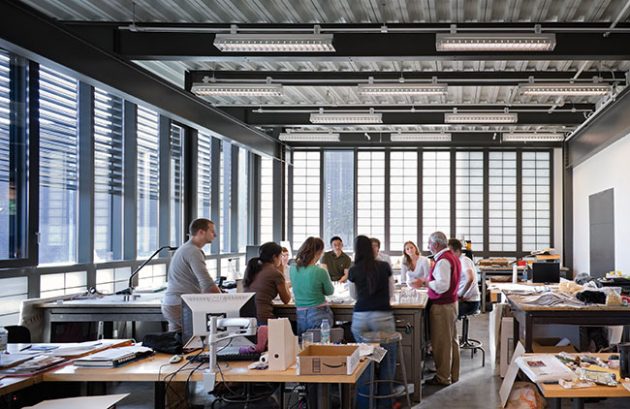 Exploiting the thermal properties
Buckinghamshire, England-based Origin Frames exploits aerogel’s excellent thermal properties to provide additional levels of thermal break insulation in its premium aluminum windows. It has been offering aerogel in its products globally for about seven years. “The use of aerogel was really driven by strict thermal codes in Europe,” says Ben Halvorsen, president of Origin USA.

Origin uses an aerogel that, combined with needled backing fibres, makes a flexible and resilient blanket. Its use as a thermal break yields a U-factor as low as 0.3 in a double-glazed window and as low as 0.15 in a triple-glazed window, according to Origin. The company asserts that aerogel improves a window’s overall thermal efficiency by 67 percent.

Thermal efficiency is not just about keeping out cold. Origin has customer bases in hot countries, like the United Arab Emirates, where keeping homes cool is the main challenge. “It costs more to cool a home than to heat one. This is a tremendous burden on the planet,” Halvorsen says.

Halvorsen also values the lower weight of aerogel and the sense of environmental responsibility that motivates clients that choose the aerogel option. “Aerogel is the lightest solid in the world, which can be important when weight is an issue,” he says.

In somewhat the same way that some people happily pay a premium for electric cars, some will pay more for better insulated windows, Halvorsen says. “What sells aerogel is that we are very environment-sensitive. Saving $50 a month does not sell aerogel.” 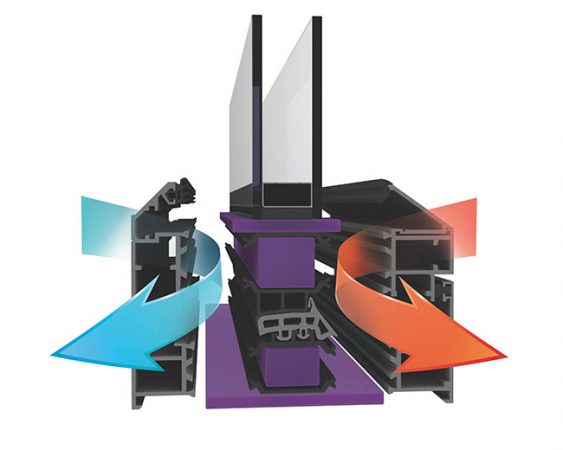 Roadblocks to widespread adoption
Cost has been a disincentive to the widespread adoption of aerogel in the window industry, but so have insufficiently challenging code requirements and a simple lack of awareness about aerogel. “Today there is still a mismatch between what most energy codes require for fenestration and the cost of aerogel. There is also the primacy of glass and vision glazing. There is just not a huge incentive to adopt widespread use of aerogel if the goal is simply to meet code and contain costs,” Keller says.

Halvorsen believes that window designers are not pushing the innovation envelope hard enough. “We should be challenging one another. We recently came out of the International Builders Show in Vegas. The consensus was that there was nothing new in the industry. I think that is a real shame. It reflects a lack of drive and innovation in the industry.”

It may be more a lack of awareness than disinterest that lies behind aerogel not becoming a more mainstream solution for improving the thermal performance of windows. Halvorsen recalls a luncheon of architects at which Origin was giving a course it called “Structural, Thermal and Environmental Material Performance for Today’s Doors and Windows” for American Institute of Architects continuing education credit.

“For the first time, we saw 150 architects sit up and pay attention. This is really so cool. Very few industry experts are aware of aerogel. We have probably been remiss in not announcing our use of aerogel to the world,” Halvorsen says.

Innovations and the future
A recent example of combining aerogel with an innovative product solution is a newly developed glass wall cladding system Advanced Glazings debuted just last year on the 10,000-square-foot expansion of a facility owned by Procase, also in Sydney. Advanced Glazings describes this system as a “frameless glass-based daylighting solution” with the product name SoleraWall.

The Procase facility expansion uses 150, eight-by-three-foot SoleraWall panels in the top half of the walls, allowing diffused natural light to pour into the building. Because the panels lock together to create the walls, they do not need a framing curtainwall system – a weak link for thermal performance, according to Shane Webb, architectural product consultant at Advanced Glazings. Webb notes that 63 of the panels took three workers just four days to install – less time than it would have taken using a traditional curtainwall system. It is also less expensive than traditional curtain walls, according to Advanced Glazings.

“We soft-launched SoleraWall last year. We currently have about $3.5 million in SoleraWall projects in the pipeline and further marketing activities in progress in North America and the European Union,” Satterwhite says.

Is aerogel the future of window and curtainwall design? The applications by Advanced Glazings, Kalwall and Origin certainly suggest that it could win in a tougher building code showdown between adding more panes of glass and using aerogel. “Hopefully, as energy codes for fenestration strengthen, adoption will increase and prices will fall,” Keller says. “High-performance insulated glass can only improve so much. Other approaches, including designing with more translucent, aerogel integrated products will be required to achieve superior building envelope performance.”

Asked what he, as an architect, envisions the future of aerogel-filled windows to be, Teeple replies, “With aerogel, I think the future is that there will be more highly detailed energy modelling of the product with more nuanced glass-to-wall ratios because we are not counting it as glass. It has a great future as energy modelling becomes more sophisticated.” He adds, “The quality of light you get is so beautiful. It becomes a great option for creating different qualities of space.”