Operating under the cloud of a looming economic recession Windoor North America showed that there is a bright spot in the fenestration and door industry.

Operating under the cloud of a looming economic recession Windoor North America showed that there is a bright spot in the fenestration and door industry. Although slightly down in overall attendance exhibitor support was strong, with 145 exhibiting companies occupying 120,000 square feet, taking a proactive lead in keeping themselves at the forefront of the industry.
“Win-door proves to be strong even in very challenging worldwide economic times,” says CWDMA President Eva Ryterband, president for the Canadian Window and Door Manufacturers Association (CWDMA).  “Trade participation was over 2600, down from the previous year, obviously due to the economic climate the entire industry is faced with,” she says.

Held in Toronto, Ont., every November Win-door is a highly focused manufacturers show featuring the latest computer hardware, software, doors, doorlites, hardware, machinery, sealants, weatherseals, testing services, wood products and systems for the fenestration and door industries.
It is the only such show in Canada and it has been operating for more than 10 years. Jacques Oullette, from Bronco Industries in Delta, B.C., has been there for all of them. “I have been coming here since the show’s inception and every time I come I learn something new. There is an opportunity around every corner,” he says, adding that glass companies are still busy in BC.
Traffic seemed busy during the first day but dropped off noticeably on the second day. “I don’t see a lot of US visitors. I think this show is attracting people who didn’t go to the GlassBuild show,” says David Devenish from Fenzi North America. “We had a few visitors ask about getting into IG fabrication so we have to be here because customers expect to see you.” 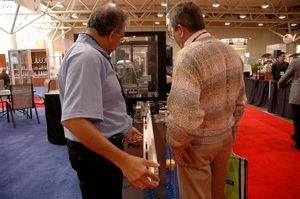 Christopher Cooper from Joseph Machinery Company says the Canadian market was fairing much better than the US pointing out some of the more buoyant regions. “I see smaller companies that are very busy…it doesn’t feel like Canada is in a recession.”
Michael Durham from Sika Canada noted that this particular show is not about the numbers. “It’s definitely slower this year but I have always maintained that it’s not about the volume of people but the quality and I think it’s still there,” he says. “The key for exhibitors is not to come to this show with the same things every year,” he adds, pointing out his company’s new SikaGlaze GS-9179, a hot applied ductile backbedding glazing compound that was attracting attention. “Bring in something different every year and let customers know about it so it’s worth their time to come and see you.”
First time exhibitor, John Tasaro from North American Glass Equipment, says Win-door is a good venue for new companies like his to make their debut. “We have only been in the market for two years so the only way to go is up. I don’t need to see 1000 people. We only need one customer to buy and I see a lot of decision makers here.”

Matt Kottke, Win-door chairperson for 2009, from Truth Hardware says it was encouraging to see that the Canadian window and door market has been able to sustain itself adding that next year’s show is well positioned to surpass the worst of whatever is yet to come.  “As we prepare for 2009 I am encouraged by the timing of this show in relation to the economy,” he says. “By this time next year we will be able to see the light.”
Win-door North America 2009 will take place in Toronto, Ont., November 10 – 12.