News
Under the Glass: GOING RETROFIT 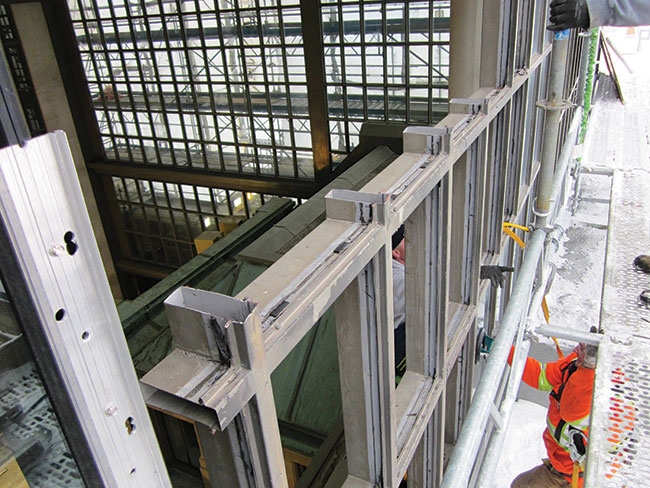 The challenge is to make the new components work with the old. Here, C3 reclads the atrium at SunLife in Waterloo, Ont. credit: Jess Redlarski

It’s a given that there are times the status quo just won’t do. And when it’s about the leakage and thermal problems caused by aging glass curtainwall and window systems, it’s a truism that making upgrades is the best way to cut energy loss and save money.

“When maintenance is no longer a viable option to extend their life, planning for a façade retrofit commences,” says Rob Wood, president of C3 Specialty Glazing Solutions (C3 SGS), a leading provider of glass and curtain wall retrofits based in Brampton, Ont., west of Toronto. He points out that a successful retrofit starts with a clear definition of the criteria and constraints of the solution. “For buildings with an aging, dated facade, owners often want to reposition the building and achieve a new, modern look. This may involve moving from a fully captured system to some combination of captured and structurally glazed components.” He adds that consideration should also be given to the type of insulating glass units, spandrel units, and architectural metals to be used.

Having overseen the retrofit of multiple office towers across Canada, including the iconic Toronto City Hall’s two office towers, Wood’s world revolves around the transformation of top-notch mega-projects, tackling curtain wall and cladding retrofit projects of just about any size and scope. Over the past five years alone, C3 SGS has retrofit more than 25,000 vision units, spandrel, and skylights, including the over 80,000 square feet of stainless steel panel repairs and glazing replacement at Sudbury, Ont.’s, Willet Green Memorial Centre; 25 floors of overcladding with a custom curtain wall retrofit at 400 University Avenue, a landmark office tower in downtown Toronto; and Edmonton City Centre Place’s 23 floors of re-glazing and detailing.

“While there are many quality curtainwall contractors for new construction, we differentiate based on the fact that our focus is almost entirely on retrofit work,” explains Wood. “The means and methods used for retrofit vary significantly from new construction practices; our core specialty is that our projects are completed on occupied buildings without displacing tenants.” C3 SGS designs and implements solutions to meet performance, technical and architectural requirements, while striving to minimize costly disruption to tenants, and thereby helping boost the client’s return on the project’s investment.

Wood’s company has also built its reputation in overcladding, preventative maintenance and structural repairs. “If it isn’t possible to adequately meet the thermal and performance goals by refurbishing the existing system, an overclad may be the next best choice,” nods Wood. A new facade is installed over the original system. The old vision glass is then removed and the old system is trimmed to the new on the interior. This approach offers heightened performance and esthetic options. “It also minimizes disruption as the majority of the work is completed from the exterior,” he notes. And as buildings age, components of their facade may become more susceptible to breaking and potentially falling from the building. “It’s important to understand how your facade is performing so that it can be effectively managed. C3 helps by reviewing the building’s systems and identifying performance issues, including air and water penetration, as well as structural concerns. We work with the client to develop an appropriate repair and monitoring strategy and a retrofit that works to minimize the risk of failure.”

C3 SGS is a member of the C3 Group of Companies, a privately held group headquartered in a modern 35,000-square-foot facility in Waterloo, Ont. The company was originally founded in 1973 by Wood’s dad. Then calledCanadian Construction Controls Limited (CCCL / C3) they  provided bridge and concrete repair services. “This was the original C3 Group company,” recalls Wood, 40, a 2001 graduate of the System Design Engineering program at the University of Waterloo. He joined the C3 Group after earning his Bachelor of Applied Science in System Design Engineering. Other companies were founded or joined the C3 Group throughout the years. The group today is a network of operating companies supported by a central management company. As a collective, the group’s expertise extends into restoration contracting, foundation systems, environmental remediation and engineering, building science and structural engineering and industrial maintenance. In 2017, the glazing division, formerly known as C3 Polymeric, was rebranded as C3 Specialty Glazing Solutions.

“Through the C3 Group, C3 SGS has access to a wide range of about 200 skilled staff, including over 60 professional engineers, as well as accounting, HR and health-and-safety professionals, something most smaller firms can’t match,” acclaims Wood. C3 SGS comprises about two dozen employees in a 7,000-square-foot building housing its team of engineers, project managers and support personnel. “We do some glass fabrication at this site, but we do set-up shops in the cities where our projects are carried out.”

One of Wood’s proudest achievements, and a prime example of how C3 SGS develops a successful retrofit action plan, is the 400 University office tower project.

The challenge is to make the new components work with the old. Here, C3 reclads the atrium at SunLife in Waterloo, Ont.

Constructed in 1969, the 25-storey office tower was housing over 380,000 square feet of total office area. The building owner understood the limitations of its original facade: single glazing throughout the tower, including the ground floor. Poor detailing in the spandrel areas and the second floor soffits resulted in significant air and water penetration. While attempts had been made to repair the building, their success was limited by the inherent design flaws in the facade. Recognizing the challenges of retrofitting an occupied commercial tower, the building owner partnered with C3 SGS for the project’s glass design, fabrication and installation. Quadrangle Architects and BVDA Facade Engineering (leading the feasibility study) were engaged to implement the complex retrofit. Among the retrofit options available (full replacement, refurbishment of the existing system or overcladding the existing system), it was the latter that was ultimately selected for 400 University.

As Wood details, the overcladding option involved leaving the existing frames in place and anchoring a new system to the original frames, as well as leaving the old spandrel panels in place. A new insulated backpan and spandrel panel were included in the new system. The original vision glass would be removed to the interior, and the interior of the original frames was overclad. “Given that overcladding relies on the existing structure, a close review of the existing window extrusions and curtainwall anchors was completed and retrofit of the anchors was included in the final scope,” he says. The team developed a solution that met all of the identified criteria, with the end result being a fully custom curtainwall. Sixteen aluminum and rubber extrusions were incorporated into the system and were designed to work specifically within the constraints of the building. The original system was used for the structural connection only and did not form part of the air seal. The new curtainwall was installed from the exterior, prior to removal of the old vision glass. Frames, insulation, vision and spandrel glass and pressure plates and caps were fully installed prior to removal of the old vision glass. As all of the new air seals were completed prior to any removals, the interior was never exposed to the exterior elements during construction. The interior work was limited to removal of the old glass and cladding of the frames and was completed outside of regular business hours. This method resulted in significantly less tenant disruption than either the replacement or refurbishment options. “Because the system was fully custom, the team at Quadrangle had significant flexibility to achieve their architectural vision,” Wood affirms. “C3 Specialty Glazing Solutions assembled the team necessary to work alongside their hands-on, knowledgeable staff to ensure on-time, on-budget delivery with minimal disruption to tenants during replacement.”

The new system has resulted in annual energy savings of over 35 per cent. Building operators report that they are much better equipped to regulate the interior temperatures throughout the building, significantly improving occupant comfort. “Finally, the esthetic upgrades have been successfully leveraged to attract and retain tenants. This is what we strive to accomplish in all of our projects – it’s what we do best,” exults Wood.

C3 is widely recognized in Canadian engineering circles, but Wood is working to get the message out to a wider range of potential project teammates, focusing especially on the difficult task of marketing his company’s services to the architectural community. “We want to get out in front with partners, showing them that what we do is different than most others,” he stresses. “A retrofit is not like putting up a new building. There are myriad things that could go wrong. But we love to tell our interesting story, how we work to find solutions to challenges without compromising on the technical aspects, and through long experience we know what works and doesn’t work. We’ve figured it out.” •