A new study looks at the safety records of companies with unionized workforces. Claims are higher, but lost time lower. Does that make them safer places to work? 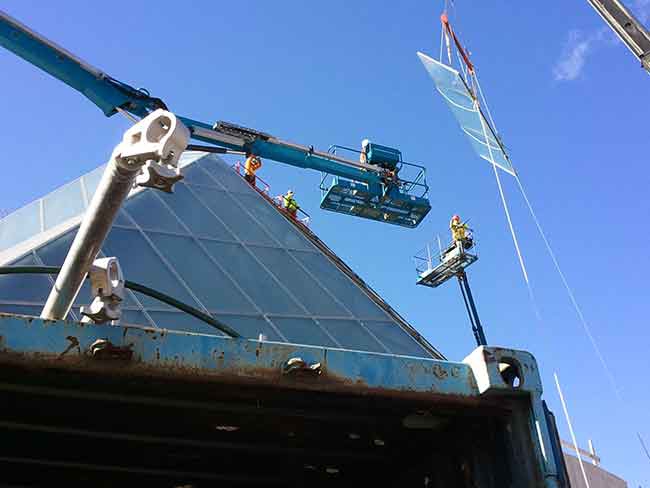 Commercial glazing is a dangerous job. Worker safety is a constant focus of Canada’s construction unions. New studies throw light on how unions impact safety performance on Ontario construction sites. The results are mixed, and counterintuitive. A union on the jobsite seems to mean more claims, but less lost time.

Workers at unionized construction workplaces in Ontario are more likely than their non-unionized counterparts to file job-related injury claims, but less likely to file claims that result in time off work.

That’s one of the findings of a new, groundbreaking study that set out to probe whether unionized construction companies experience fewer workplace injuries than non-unionized ones. The study by the Institute for Work & Health (IWH) was funded by the Ontario Construction Secretariat (OCS), a tripartite organization of government, employer and trade union representatives that promotes the value of organized industrial, commercial and institutional construction in Ontario. The study was recently published online by the Journal of Occupational and Environmental Medicine.

Using claims data from the Workplace Safety and Insurance Board (Ontario’s workers’ compensation board), the study found unionized companies in Ontario’s industrial, commercial and institutional sector, compared to their non-unionized counterparts and when taking firm size into account, have:

However, adjusting for firm size takes into account that larger firms, both unionized and non-unionized, may have greater resources to devote to injury prevention and post-injury work accommodation.

“These findings suggest to us that unionized workers may be more likely to report injuries, including injuries that don’t require time off work, at workplaces where managers and supervisors are committed to safety,” said Dr. Ben Amick, IWH senior scientist and co-lead investigator on the study.

While unionized workers may be more inclined to make work-related injury claims, these findings suggest that their claims are less likely to be of a serious nature, he adds.

“The lower rates of lost-time claims might also suggest that unionized workplaces are safer,” added Dr. Sheilah Hogg-Johnson, IWH associate scientific director and project co-lead. “It could be they do a better job educating workers, in part through apprenticeship training. They may have more effective health and safety programs and practices. They may give workers more voice to influence the health and safety of their work environments, and to report not only injuries, but also near-misses.”

“Our research doesn’t allow us to say what explains the difference in claim rates between the unionized and non-unionized firms,” Hogg-Johnson said. To help dig deeper, the IWH team is currently studying the organizational practices and policies of a sample of construction firms to examine what is behind the apparent union-safety effect.

Studies comparing unionized and non-unionized workplaces are very difficult to do because of a lack of data. They require datasets that are large enough to ensure that the sample is representative of the labour market. Thanks to the involvement of OCS, the IWH research team had access to a very comprehensive, province-wide database of unionized firms in the province’s industrial, commercial and institutional construction sector.