Organizations are offering new ways to certify your competence. 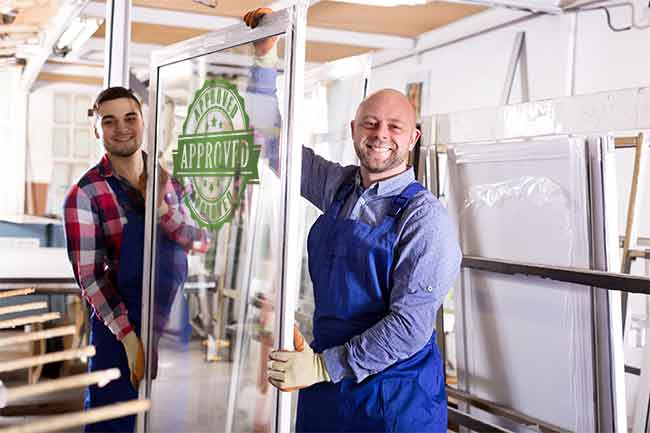 Telling customers you offer high quality and great workmanship is easy to do, but hard to prove. Programs like the new North American Contractor Certification say they can help. Photo: Fotolia

If you haven’t already heard about accreditation programs in the glass industry, it’s clear you’re going to be hearing a lot more soon.

One is the North American Contractor Certification (NACC) program, announced by the Architectural Glass Institute (AGI) in January 2015. In July, the names of the first NACC-certified companies were released – three U.S. firms, as well as Ferguson Neudorf Glass of Beamsville, Ont. Twelve more architectural glass & metal contractors are currently going through the certification process.

The NACC program was created to provide baseline recognition for competency, business practices, and adherence to industry-accepted guidelines. The program “provides confidence to building owners as well as the design and construction community with defined processes, controls and procedures to help drive a higher-quality end product.” The NACC Board of Directors includes contractors, consultants, construction specialists and manufacturers.

Administrative Management Systems (AMS) is the third-party certifier that administers the program. It has been doing this sort of work since 1997, for U.S. national associations such as the Safety Glazing Certification Council, Insulating Glass Manufacturer’s Alliance and the National Fenestration Rating Council. AMS President John Kent says NACC provides a differentiation that helps contractors, building owners, architects and the specification community to select competent companies and increase the likelihood of a successful project with lower re-work.

Kent describes industry awareness of NACC in the U.S. and Canada as “likely minimal at present,” but points out that “the program is still very new. Eighteen months ago, it was just a concept.” Outreach to architects, builders and the specification community is underway through things like mailings and presentations, and an ongoing promotional plan was developed at the first NACC annual meeting in mid-September (in Atlanta, piggy-backed with GlassBuild). Additionally, as of August, Kent notes, “We were thrilled that through some really hard work by many people, the NACC program is now under ISO/IEC 17065 Accreditation by the American National Standards Institute (which has an agreement with the Safety Council of Canada).”

Alberta glazing contractor Jim Brady shares his personal views on the program. “While I think that the idea has merit, it also has some underlying issues,” he says. “In Canada, construction processes are very regionalized…as a result, the architects and consultants for projects may or may not be onboard with NACC.” He adds that while he’s “all for” programs that recognize industry leaders, he fears that a program such as NACC might be a detriment to fair competition. “Just because one company doesn’t have NACC Accreditation doesn’t mean that they can’t give a good quality installation, and if not having that accreditation disqualifies them from quoting on the project, then it limits competition,” Brady observes, “thereby increasing prices to the end user (building owner). My guess is, most companies in Alberta would likely not participate in this program and they would only do so when backed into a corner.”

Brady also wonders if the NACC board members include representation from smaller more regionalized companies. We asked AMS, and found out that of the five glazing contractors on the ten-person NACC accreditation board (the others being end-user companies such as building contractors), two companies are larger and three are smaller, with a good diversity of size always the aim.

Other accreditation programs
Brady notes that in Alberta, the Alberta Apprenticeship and Industry Training is used to educate tradespeople, but that the glazier trade in that province is not compulsory certified and apprenticeship is not mandatory. “Personally, I think this is wrong,” he says. “It is mandatory for someone to get training on hairdressing, but not for someone to change a sealed unit into a four-sided structural silicone curtainwall ten storeys off the ground.”

Currently in Canada, Brady notes, the provinces of B.C., Alberta and Ontario have glazier apprenticeship training with in class instruction. “I am unsure about Quebec,” he says. “The Maritimes, Saskatchewan, Manitoba and the Territories do not. Some companies in Saskatchewan and Manitoba use the Alberta program. Nationally, the Red Seal program is in place, but…an individual merely has to prove they have a certain amount of hours in the trade, write an exam, and if they pass, they are recognized as a Red Seal Journeyman.”

Glazier has been a Red Seal trade since 1986, and the related standards and exams have been updated several times. Julia Sullivan at the Red Seal Secretariat says “Earning a Red Seal endorsement provides good job prospects and allows individuals to work anywhere in Canada. Completing an apprenticeship in a Red Seal trade also gives access to many of the benefits available from the government.”

Brady would be strongly in favour of getting curriculum delivered to tradespeople in jurisdictions where there is no program, and processes to measure skills with both written and practical exams. “In my years as a champion for education, I have heard many people say ‘I can’t afford to send my people to school, we’re too busy, others may steal them away from me, etc.’ and my only response to them is ‘You can’t afford to not educate your people.’ ”

Although he had not heard of NACC, Brady did point out Green Advantage (GA), an organization based in Maryland that’s now working to launch a ‘Curtainwall Installer Certification’ (GACIC) program. It will include written as well as performance exams with standards created by the International Glazier Certification Board, a broad array of industry experts from the U.S. and Canada.

Tough standards?
As Brady has noted, accreditation carries concerns. It can be a controversial issue because large companies can afford to put their people on the boards of the associated groups and certification bodies, thereby driving tougher and tougher accreditation standards, which may squeeze out competition from smaller companies.

On the other hand, good accreditation programs can help buyers avoid fly-by-nighters without having to embark on time-consuming due-diligence searches. In addition, these programs can help prevent governments from having to step in to protect the public from shoddy workmanship. In one firm’s view, accreditation also helps companies take their reputation to the next level. “Raising the bar and being an industry leader is something that Ferguson Neudorf strives for every day, so [going for NACC accreditation] was natural for us,” says Peter Neudorf Junior, director of field operations at Ferguson Neudorf Glass (FNG) in Beamsville, Ontario. “We want to be above the norm.”

FNG (founded in 1986, and now one of Canada’s largest curtainwall contractors) became NACC accredited in July. Neudorf says he and other leaders at the firm started talking about third-party accreditation a couple of years ago. “I sit on the Ontario and American Boards of the Architectural Glass and Metal Contractors Association and there have been many discussions about a certification specific to our trade,” he explains. “There are certainly issues with quality and standards within our industry and not all companies are committed to improving these standards. The general thought was that it’s time for some kind of accreditation and it’s time for architects and consultants to put their support behind this concept. My brothers and I decided to look into it, and I joined the advisory committee that got the necessary information to AMS to develop the NACC.”

When asked about the most onerous or challenging of the NACC criteria, Neudorf says it was improving overall production flow and communication between departments. “We needed improvement in how sales, purchasing, engineering, fabrication and installation connected with one another,” he notes. “It was a challenge to make changes. Some of our people were resistant to change and didn’t recognize the benefits of adding the extra paperwork required to be a little more organized. Our team just kept pushing to have the necessary changes made to our standard procedures and added some new ones, making sure our management team were committed to getting things done in the way that best suited each department. It’s about more accountability, in the end.”

Those at Ferguson Neudorf consider the NACC cost to be very fair. Neudorf says they’ve paid at least the same amount for other third party services in the past, “and this time it really helped us streamline our business.”

Kent says the total NACC cost is currently a little under $4,000 per year, but notes that there will likely also be internal costs for a firm to change things so that they comply with program requirements. “We feel these costs are a fraction of the savings available from increased efficiency, greater recognition and lower rework,” he says. “In fact, the number one comment we have received from companies undergoing the process is that ‘this NACC process will make us a better company.’ ”

In terms of industry acceptance, Kent believes that while recognition of certification is never an overnight event, the value always becomes recognized by the user community. “Each of the [other programs we administer] has enjoyed steady increased recognition for over 30 years. We fully believe the NACC program will be a significant force both in the U.S. and Canada in the coming months and years.”

Neudorf agrees that awareness and industry acceptance is going to take time. “I’d say maybe half of our industry in Canada are moving towards certification at this point,” he says. “The other half either don’t see the value or think it’s not for them. But companies who are interested in being accountable will want this.” He adds, “We’ve found that it’s been very positive, an eye-opener and a learning opportunity. It’s not something to be afraid of – it is not an audit but rather an evaluation. You should welcome it if you want to become a better company.”

Here are just some of the agencies offering to certify your company, your work or your people.

North American Contractor Certification
theagi.org
The NACC Program was created to provide certification recognition as a means of creating a baseline for competency, business practices, and adherence to industry-accepted guidelines. The program provides confidence to building owners as well as the design and construction community with defined processes, controls and procedures to help drive a higher quality end product.