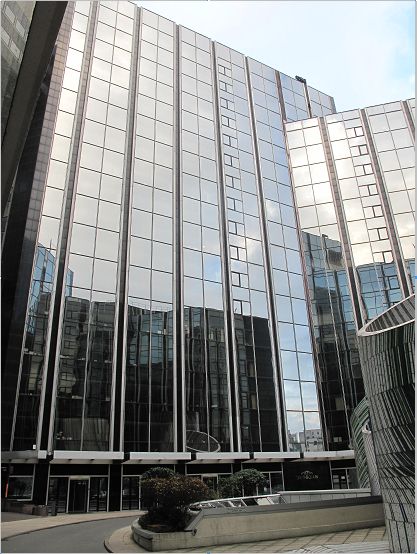 Dec. 16, 2014 – Saint-Gobain has announced a deal to
acquire a controlling interest in Sika while buying only 16 per cent of the
company's shares from the majority shareholder, the Burkard family. Sika's
board of directors and group management has threatened to resign if the deal
clears anti-trust review.

Dec. 16, 2014 – Saint-Gobain has announced a deal to
acquire a controlling interest in Sika while buying only 16 per cent of the
company's shares from the majority shareholder, the Burkard family. Sika's
board of directors and group management has threatened to resign if the deal
clears anti-trust review.

"Saint-Gobain has announced a plan to
acquire a controlling interest in Sika. The transaction involves Saint-Gobain’s
purchase of Schenker Winkler Holding AG, owner of 16.1 per cent of Sika’s
capital and 52.4 per cent of its voting rights, for 2.3 billion Euros.
Following the acquisition, the Saint-Gobain Group will be able to fully
consolidate Sika in its accounts, leading to a positive impact on net income as
from the first year. Saint-Gobain does not intend to launch an offer for Sika’s
remaining shares and has full confidence in the company to continue developing
the business.

"Sika employs more than 16,000 people
in 84 countries and reported 4.3 billion Euros in sales in 2013. Over the past
few years, the company has shown remarkable growth (more than 8 per cent
average annual growth between 2007 and 2013) and capacity for development in
emerging countries (38 per cent of its sales are made in emerging countries).

"Sika is the world leader in construction
chemicals and number two worldwide for adhesives and sealants for its
industrial applications. Its products and services draw on extensive
technological expertise in waterproofing, soundproofing, sealing and bonding
and protecting and reinforcing structures.


"The transaction is subject to
clearance from the competent anti-trust authorities and is expected to be
finalized in the second half of 2015 at the latest.

"Pierre-André de Chalendar, chairman and
CEO of Saint-Gobain, said, 'The two transactions – the plan for which we are
announcing today – will accelerate the group’s strategic refocus on the design,
production and distribution of innovative, high-performance solutions for
habitat and industry. The transactions meet the objectives we announced in
November 2013 to raise the growth potential and reduce the capital intensity of
our businesses, increase our presence in emerging countries and in the US, and
expand our range of differentiated products supported by strong brands. We are
looking forward to working with Sika to enhance the growth potential of this
excellent business.'"

Sika's board has released the following
statement:

"The board of directors and the group
management of Sika were informed Friday evening, Dec. 5, 2014, that the French
group Saint‐Gobain intends to indirectly acquire all shares held by the Burkard
family, Sika's current majority shareholder. If the transaction were to be closed,
Saint‐Gobain would control 52.4 per cent of all voting rights and 16.1 per cent
of Sika's share capital.

The board and group management are informed
that Saint‐Gobain will not make an offer to public shareholders of Sika AG and
that the transaction is subject to approval by the anti‐trust authorities.

"Sika's ownership structure is unique.
For historic reasons the Burkard family was able to control Sika with only 16
per cent share in the capital. Eighty-four per cent is owned by public
shareholders, which will not receive an offer for their shares. The trust of
these shareholders has relied on the repeated public commitment of the family
to act as Sika's anchor shareholder and accompany the group in the best
interest of all shareholders. The intended transaction would bring a
fundamental change. Unlike the family, Saint‐Gobain is an industrial investor
and numerous conflicts to the detriment of the public shareholders could arise.
The non‐conflicted board members and the group management each independently
have come to the conclusion that if the transaction materializes they are no
longer in a position to serve in the best interest of the company
and all its stakeholders. They have therefore decided to resign following
closing of the transaction. The closing will occur once the anti‐trust approval
has been obtained."