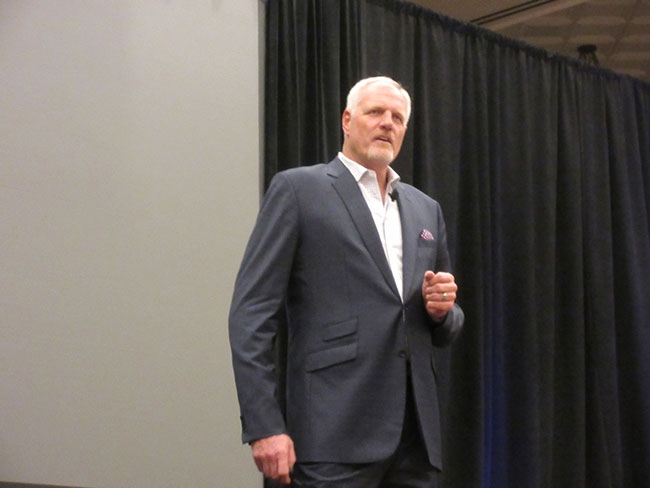 If the National Glass Association’s GlassBuild America could be described as the best buffet in Vegas, a smorgasbord of delights for every glass nerd in the industry, the Glass Association of North America’s Building Enclosure Contractors (BEC) Conference is more like the Foundation Room on the 63rd floor of Mandalay Bay: an intimate, information-intensive experience for 403 of the biggest names in the business.

The 2.5-day event kicked off at Caesar’s Palace with GANA president Stanley Yee announcing that GANA and the NGA had together appointed a joint task force to explore a combination of the two organizations; “This is going to be a very short-lived and focused task force” said Yee. “It’s our association. It’s our glass and glazing industry. We’re thinking big picture for the whole industry. More importantly, it’s your glass and glazing industry. It will take you and us to grow this and develop it into what we want it to be.”

Julia Schimmelpenningh, global applications manager for Eastman Chemical Company, past GANA president and renowned expert in laminated glass delivered a superb and hugely optimistic state-of-the-glass-industry address. According to Schimmelpenningh, in 2016 most segments in commercial and residential were strong. “Sometimes in double digit growth and essentially it was a very good year. Glass prices are very, very steady. We have not had the change over the years that the other construction materials have.”

Taking a look forward into 2017, Schimmelpenningh told the packed audience that global construction is expected to grow by 85 per cent to $15.5 trillion. “The impetus is expected to be from the U.S., India and China which is a very good thing. There is going to be a tremendous amount of growth. Strong growth in the commercial sectors but slower overall versus 2016.”

Treading lightly, Schimmelpenningh addressed the topic on everyone’s mind. “I don’t know if anyone was aware but we have a new administration. And that new administration is doing stuff. We have activities going on. What we need to watch as an industry are the reforms going on from a finance and tax standpoint. We need to look at policy changes and see how that effects anything we do from a labour, immigration and trade side. Regulatory reduction may actually help the industry depending on what may be happening in that area. It may make our industry a little freer. On the other hand, it may make it a little messier.”

“Infrastructure spending is the big silver lining of the new administration,” said Schimmelpenningh. “They have been saying all along than they are going to spend on infrastructure. The question is, where are they going to spend it? Are they going to spend it on roadways or institutional buildings? Chances are that with the state of our roads and bridges in this country right now, a good portion of the spending will be there. With that being the case, we are going to need buildings and structures to accommodate those things.”

Labour has been a recurring theme for over a decade. The reality is, labour from a design and engineering standpoint can now be done on a global basis. “There are plenty of people to do that,” said Schimmelpenningh. “You can be sitting in California and have someone in Germany doing your structural engineering and design. You do not need to have somebody in place. Where it becomes an issue is skilled labour with glazing contractors. You need to understand you have a wealth of people available. You need to make the trade attractive. We need to make sure they are trained and love what they are doing.”

Part of the labour equation is a generational issue. Family businesses are not finding successors because the kids are going off to other areas. “There is a well-known saying that once you’re in the glass industry for five years, you cannot get out,” joked Schimmelpenningh. “Whether you want to or not, you are sucked into that vortex for life. Well guess what? Millennials, the new workforce, do not subscribe to that. They essentially say, ‘Uh-huh, I’ll be out of here in three years.’”

You take the time, energy and training to get them certified and they leave. “How we prepare ourselves for that is the establishment of training mechanisms to bring these people on board into our industry faster,” Schimmelpenningh said.

“If we look at the markets, our prediction is much more glass,” said Schimmelpenningh. “Larger lites, daylighting applications, structural and podiums. We’re going to see all of that evolving. We’re going to see neutrality in colour continue. Low-iron glasses are going to continue to be used. That doesn’t mean there isn’t going to be any colour, it’s just going to be neutral and pure.”

According to Schimmelpenningh, people are getting uncomfortable with glare but are looking for modest reflectance because they want privacy. “We also see a lot of glass being used in interior design for daylight depth to bring natural light deep inside the building as well as colours, graphics and printing. There is a preference to have glass in hospitals because of the cleanliness.” Glass is much easier to clean versus wall systems.

“Oversized is going to appear over and over again. We’re going big. We need to prepare ourselves to go bigger. We’re also seeing the glass go thicker and thicker. How do you get these huge pieces of glass into the inner cities? How do you store them? How do you get them put up onto the building? How do you replace them? All of that needs to be considered. The simplicity of the glazing is not going to be the same.”

Schimmelpenningh told the audience that the changes for railings are going to affect the glass market as well. Schools will be using more security glazing especially entryways and visual points so staff can see what is coming and can protect students. Stadiums and amusement zones are also using a lot of glass for visibility and safety.

Elevate yourself. “As a pilot, one of the things that I was told was that you want to go the highest altitude possible,” said Schimmelpenningh. “Because when something happens, when a bad time comes, you have a lot further to come down and land safely from a higher height than just skimming the ground. Let yourself soar. Let yourself put in those complex, very high value-added pieces of glass. Put in those huge sizes. Do the stuff you need to do now because we are on an economic wave that is very, very attractive. Make the most of it right now.”

The Contractor Glazier Challenges panel moderated by glass expert Max Perilstein fired on all cylinders. The last presentation of the conference and part of the Contract Glazier Deep Dive, the discussion acted as an anchor and drew an impressive crowd considering for many it was day three or more in Vegas. Featuring glazing contractor panelists from across the U.S., the statements echoed many of the messages from throughout the conference.

Joe Clabbers, president of National Glass and Metal Co., opened up about challenges his Philadelphia-based glazing contract firm has to deal with. “Having the right people and developing talent is a big challenge. We try to stay active in our local labour market. We’re a union contractor so we’re involved in apprentice training. We try to homegrow our people. They are hard to find so you have to make them.”

According to Clabbers, a Philadelphia training centre became accredited with the Department of Education so now when an apprentice finishes their four-year apprenticeship, they earn an associate’s degree as well. “That helps to combat Mom and Dad saying ‘You want to go to college. You don’t want to work with your hands your whole life.’ So that has been a good recruiting tool.”

“I was going to come up and say ‘Labour, labour, labour’ and then sit down,” agreed Ted Derby of LCG Facades. “It is always a big, big issue. We have an in-house training program that we instituted about two years ago. We are in a non-union area and we felt like we needed to do something to stabilize our workforce and bring the level up. Architects and engineers are challenging us with every new project that they are developing. We really need to be able to respond to those challenges with expert, quality people in the field and it’s challenging to get those people to be able to stay with you. We provide a stable environment for them where they can raise their family and be a part of the glazing community.”

Bill Sullivan, president of Brin Glass Company told the audience that the architectural community and general contractors are also struggling with staffing. “What we are seeing on projects more and more which concerns us is incomplete plans and specifications,” said Sullivan. “Incomplete or inaccurate details. Greater emphasis and reliance on the glazing contractor to assist with drawings, design and development – including structural requirements. Thermal requirements that are often not compatible with the project.”

According to Sullivan, the general contractors are also dealing with inexperienced field superintendents, project managers and project engineers. “We find that they lack the experience to recognize incomplete details on the drawings and perceive the problems that they are going to cause on the job. Improper sequencing of trade schedules. They wanted us on site a few weeks ago. Unfortunately there wasn’t any sheathing on the building. The brick wasn’t there but the field superintendent wanted us there for some reason. Lack of knowledge of the scope of work for each trade. We see that as being a problem. When we are dealing with people that are not as experienced as we would like them to be, they lack the capacity to make those decisions to effect that project.”

“One of the other challenges that we’ve had some success with is where we are insisting on being paid for design assist,” said Derby. “For many years I remember providing design assist without any type of compensation. Buildings are so technical and the interfaces are so important, you really need to have a collaborative effort between the architect, the contractor and the installing façade contractors in order to have a really successful building. Qualified staff or the lack thereof can strongly effect the success of failure of any given job.”

Derby shared with the audience members what a rolling schedule is. “It is a schedule modified by the general contractor to roll the current schedule likely forward from what was originally established in order to pick up speed on the job. It reduces our durations and puts more pressure on us. One of their other favourite things is to schedule landscaping right underneath us.”

“Some things you just don’t have control over,” said Clabbers. “You can plan, schedule, order glass and metal and then the job’s delayed. With unitized curtainwall maybe not as much but if you are interfacing with other contractors or trades, they cause us to do backflips sometimes to keep things rolling.”