News
One piece at a time 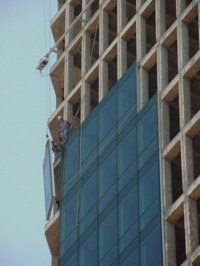 Dec. 30, 2008 – Beta Max Hoists were used to give the CNN building in Atlanta, GA a desperately needed facelift after being damaged by a 135 mph tornado that ripped through the city’s commercial center in March.

Beta Max Hoists were used to give the CNN building in Atlanta, GA a desperately needed facelift after being damaged by a 135 mph tornado that ripped through the city’s commercial center in March. Employees at the company’s cable news network got a closer view of the storm than they would have liked. Inside the CNN Center, water poured through the damaged roof, into the building's atrium. The next day, the CNN was faced with more difficulties after parts of the ceiling collapsed.

A skylight system installer and specialty contractor was hired by the CNN Center to repair more than 600 windows destroyed by the tornado, but the job could not be handled from the ground up as most of the damage was done to windows on a series of step roofs with no direct access.

An equipment rental firm, with expertise in designing and implementing scaffold strategies and systems used a Beta Max system to lift glass off one roof and trolley it to another roof. The company’s Leo Glass Master System has been specifically designed for the purpose of easily and safely lifting and moving heavy, fragile materials, such as large lites of glass.
It features variable frequency drive controllers, which help to provide the hoist’s soft start and stop capabilities. This allows perfect maneuvering of breakable products since operators can lift glass lites in finite increments and set them down without causing damage. The system has a maximum lifting capacity of 2000 lbs and can travel up to 200 feet high. These features were ideal for the CNN Center job as glaziers needed to replace about 600 pieces of five by 12 foot glass lites, one piece at a time.