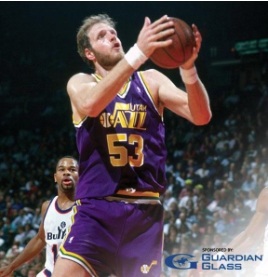 Mark is a team building expert who shares with organizations and audiences nationwide, how he went from a 7’4″ twenty-one year old mechanic who couldn’t play basketball to a twelve year career as an NBA All Star with the Utah Jazz. He reveals the secrets that skyrocketed him to fame as the Two-Time Defensive Player of the Year, enabled him to break the NBA record for the most blocked shots in a single season and be selected to play in the 1989 All-Star Game. Today Mark travels the country employing principles and coaching techniques from his twelve years playing pro basketball to teach industry leaders, teams and individuals how to outsmart, outlast and outperform their competition and achieve record breaking success.

FEATURED SPEAKER: THE INTERSECTION OF ARCHITECTURE, ART, DESIGN AND ENGINEERING
JAMES CARPENTER, JAMES CARPENTER DESIGN ASSOCIATES
James Carpenter has worked at the intersection of art, architecture and engineering for nearly 50 years, advancing a distinctive vision based on the use of natural light and glass as the foundational elements of the built environment. Carpenter founded the cross-disciplinary design firm James Carpenter Design Associates in 1979 to support the application of these aesthetic principles to large-scale architectural projects. In 2012, Carpenter and Reid Freeman, AIA, established Architecture Operations D.P.C. in order to provide clients with a comprehensive architectural service portfolio.  Carpenter has been recognized with numerous national and international awards, including an Academy Award in Architecture from the American Academy of Arts and Letters and a MacArthur Foundation Fellowship. He holds a degree in architecture and sculpture from the Rhode Island School of Design and was a Loeb Fellow of Harvard University’s Graduate School of Design.